Will ALIEN VS. PREDATOR lead to DUFF VS. LOHAN?

We live in a cinematic age where big budget blockbusters are adapted less often from great literature or venerated stage productions than from TV shows, comic books or video games. “Alien Vs. Predator

” started off as a 1999 video game that pitted the two eighties horror movie creatures against each other. But it’s certainly not the first time a movie studio has mixed monsters to milk money out of fading franchises. 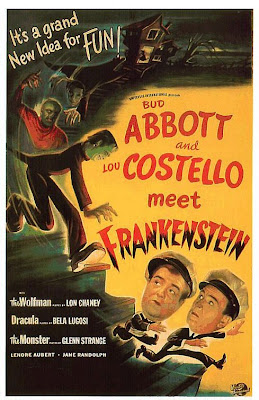 In 1943, two of Universal Studios’ famous monsters squared off in “Frankenstein Meets the Wolfman

,” and initially their meeting was as cordial as it sounds. Bela “Dracula

” Lugosi took over the role of the Frankenstein

monster from Boris Karloff and was not nearly as effective, even against the furball played again by Lon Chaney. The movie resurrected both dead monsters then united them in an effort to find a cure for the werewolf’s curse (wouldn’t just staying dead have worked?). Of course, since the Wolfman

only had an HMO, the effort was half hearted and the whole thing ends in a big dambusting mess.

Those two would meet again, but as part of a larger merging of franchises (yep, they even had ‘em back then, but the term hadn’t been coined yet) in 1948’s “Abbott and Costello Meet Frankenstein

.” Actually, the comedy duo met a whole cadre of Universal monsters, including Dracula, the Invisible Man

and the Wolf Man. The entire plot boils down to “Bud doesn’t notice monster behind him and Lou is scared stiff” but that doesn’t keep it from being a hilarious mixture of comedy and chills. Abbott and Costello met other beasties in sequels (including the strangely titled “Abbott and Costello Meet the Killer, Boris Karloff

”), but none of them were as successful as this first entry.

One of the most bizarre battles of the icons took place in the 1959 Mexican film, “Santa Claus

,” this movie features a Santa that lives not at the north pole, but outer space, and must team up with some kids (of course) and his roommate, Merlin the Magician (see? I told you!) to stop Pitch the acid-reflux suffering demon from destroying Christmas! Featuring some disturbing effects, wild overacting and enough surrealism to make you hit the rewind button, this is quintessential “Mystery Science Theater 3000

” material (and skewer it they did).

pretty much made a career of being “Vs” some atomic being or another, but in 1962 he took on the eighth wonder of the world in Toho / Universal’s “King Kong vs. Godzilla

.” The battle between the fire breathing atomic lizard and the... big... monkey... is more like a wrestling match out of Kaiju Big Battel than an effects extravaganza, but that’s no shock. What is surprising is that Godzilla loses to the American icon, showing a marked lack of cultural pride from the folks at Toho.

In 1966, someone thought that the perfect adversary for the prince of vampires was a gunslinger from the old west, and so audiences were treated to “Billy the Kid vs. Dracula

.” In this low budget headscratcher, a reformed Billy has to figure out a way to kill Dracula (John Carradine) who is posing as Billy’s girlfriend’s uncle by day and killing all the women and sheep at night! Luckily there’s a kindly German couple in town who recognize the bloodsucking bounder and start putting wolfsbane all over the town (apparently getting their monster remedies confused). That same year, Jesse James met Frankenstein’s Daughter

in another movie, but that one just sounds silly. 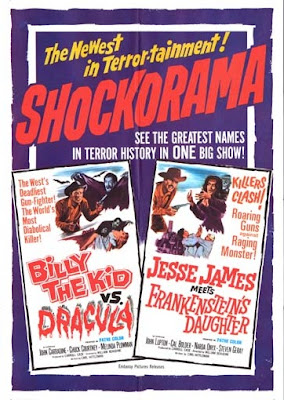 Long past their Universal prime, two legendary monsters squared off against each other in the cheapie 1971 flick, “Dracula Vs. Frankenstein

.” In this Edwoodesque disaster, a goateed, curly haired Dracula (played by, get this, Zandor Vorkov) forces Dr. Frankenstein (who is gainfully employed by an amusement park horror show) to resurrect his patchwork creation. Naturally, the kids can’t play nice and Dracula and the monster get into a fist fight to the death! Who wins? Oh, no, that would ruin it for you! This truly bizarre mixture of monsters, bikers, sex, drugs, carnies and puppies defies description, so I’m giving up.

Maybe the most acclaimed battle movie ever, 1979’s “Kramer vs. Kramer

” pitted Dustin Hoffman against Meryl Streep. Sadly, aside from making Dustin Hoffman seem of normal height, this movie is sorely lacking in exciting visual effects. Even though the entire film takes place in New York City, no buildings are destroyed, there’s not one car chase and the only excitement comes when a kid falls from a jungle gym on a playground. Pshhht. This is one of the most disappointing action films ever made (and don’t even get me started on the video game!). It’s no surprise this franchise didn’t last.

” was a much scarier fightfest, although the movie did disappoint fans of both the “Nightmare on Elm Street

” series. Aside from eleven years of development and over a dozen writers, the problem lay more in the fear of New Line execs. Presumably afraid of alienating fans of one slasher or the other, the much anticipated battle between Freddy and Jason ended in a pathetic draw. It’s surprising they didn’t team up for the final reel to take down the Asian drug lord or some such “Lethal Weapon

That fear of declaring one fan fave the winner over another may be one of the reasons that Warner Bros., crushing the dreams of fanboys everywhere, scuttled the planned “Batman vs. Superman” movie last year. While common sense would indicate that Superman, the most powerful being on the planet, might have the edge over the non-super powered Batman, Batman is more popular, and hence, would have to win. Plus, the only way to make that battle interesting would be for the dark horse / knight to somehow best the man of steel (something he’s done in the comics numerous times over the years when things went south for the Super Friends).

If “AVP” proves to be a blockbuster, will it lead the way for more big screen team-ups? Will the real sharks in “Open Water

” take on the mechanical Bruce from “Jaws

?” Will Hellboy meet the Exorcist? How about “Terminator 4: Meet Michael Moore!” Who knows, maybe some studio is currently in negotiations to bring “Hillary Duff Vs. Lindsay Lohan” to a multiplex near you. Now THAT’s something I’d pay to see.