Lordamighty knows there have been lots of goofy comic books published since the medium got its start seventy years ago. PREZ. THE BOUNCER. CAPTAIN TOOTSIE AND THE SECRET LEGION. But one of the goofiest has to have been FAST WILLIE JACKSON, a mid-Seventies attempt at creating an African American version of Archie and the gang. 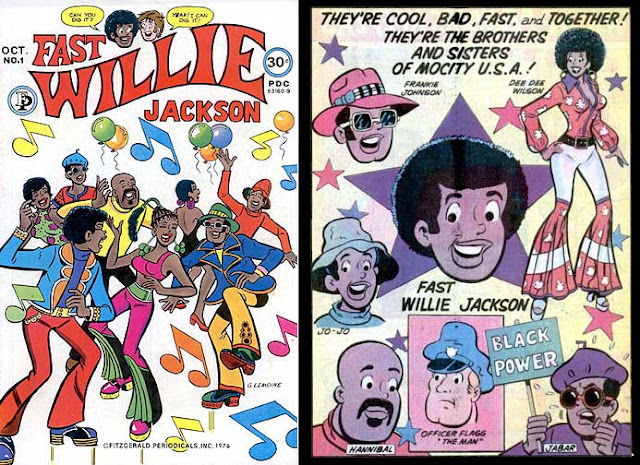 FAST WILLIE JACKSON was published by Fitzgerald Publications and lasted for seven issues in 1976 and 1977. I only have the first one, and I’ve had it since it was new. I guess there was something in this suburban Pennsyltuckian that was curious about what life was really like for urban black youth on the streets of “Mocity USA!” Or maybe I bought it because GOOD TIMES

was my favorite show at the time and the foxy Dee Dee Wilson reminded me of BerNadette “Thelma” Stanis.

Written by publisher Bertram Fitzgerald and drawn with stunning mediocrity by Gus Lemoine in a blatant swipe of Archie Comics house style, FAST WILLIE JACKSON didn’t ring true in 1976 and hasn’t aged that well in the subsequent 28 years.

Up through the 1970s, black characters in comic books and strips were usually tokens. PEANUTS had Franklin, BATMAN had Lucius Fox, SPIDER-MAN had Robbie Robertson, CAPTAIN AMERICA had The Falcon (who was a really cool character), the TEEN TITANS had Mal (don’t ask). Not only was ARCHIE comics’ Chuck Clayton seemingly the only black student at Riverdale High, but since he was the son of the only other black character, Coach Clayton, odds are they were the only African-American family in the whole stinkin’ town!

So, it’s nice that someone put out a comic book with a multicultural cast. In addition to the mostly black characters, there was José Martinez, the owner of The Spanish Main, the local soda shop, the Asian owner of the martial arts school and an unnamed caucasian kid whose sole appearance is at the top of the cover answering Fast Willie’s query, “Can you dig it?” with “Yeah! I can dig it!” Play that funky music, white boy!

The only major white character in FAST WILLIE JACKSON is Officer Flagg, aka “The Man”, the cop on the beat who’s always tryin’ to keep everybody DOWN, mostly by yelling at them for littering. Man, that Mocity is a dangerous place! 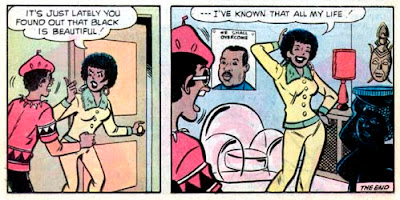 But some of the black characters don’t fare much better. Jabar, the angry militant (whom I swear, it seems inspired Spike Lee’s character of Buggin’ Out in DO THE RIGHT THING) is told by Dee Dee “You go around uptight all the time!” Musclebound Hannibal seems to be one of those guys who works out all the time to compensate for other shortcomings. He’s awfully frustrated.

But the most amazing character in FWJ is Frankie Johnson, a playa who, if not a pimp already, is definitely in training. In the jaw dropping story, “Happy Birthday, Frankie,” he’s urgently summoned to Dee Dee’s home so she can give him all of HER birthday presents. Angered, Fast Willie complains, “That Frankie gets everything, chicks, bread ---”

There’s actually a lot of unfinished lines in this comic book. In the same story, Frankie tells Dee Dee, “Sweet baby, I like everything about you! ---Your eyes, your lips, your gifts, your---” to which Dee Dee says, “Oh, Frankie, does that mean we’re ---” It’s like an Urban Mad Lib!

Anyway, “Happy Birthday, Frankie” ends with Dee Dee kicking everybody out of her pad except Frankie. She wants him to stay, but he gathers up his shit and takes off, telling Dee Dee that he’s really looking forward to next week because it’s Melba’s birthday and “She’s got more friends than you which means more gifts for me!”

Hmm, I always assumed that Gus Lemoine was a pseudonym of Stan Goldberg.