SONGS OF THE POGO 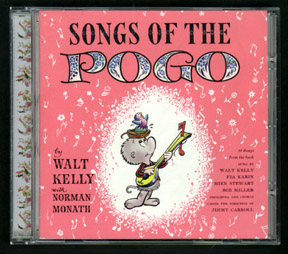 , a reissue of the long out of print album written (and partially performed) by the legendary creator of POGO, Walt Kelly. It’s a sad reflection of the aughts that POGO is not as well remembered as it should be; Kelly’s delicate swamp satire (a kind of hybrid of WINNIE THE POOH and ANIMAL FARM) ran from the late 40’s through the mid 70’s and inspired generations of cartoonists and humorists.

This CD compiles the 1956 album (on which Kelly collaborated with Norman Monath and adds two 1969 7” singles as well as rehearsals and a spoken word piece read by Kelly.

The music is as “old-timey” as one would imagine, charming to the old soul, just weird and alienating to the young. That’s why it’s amazing and commendable that Reaction Recordings (distributed by Parasol) has released this, and with such panache. The booklet features lots of Kelly art and extensive liner notes.

For POGO fans, this is a must. For aficionados of comics history and novelty records, it’s also a worthwhile addition to yer liberry (pardon the slip into Pogospeak). One could even hope that some parents will buy this for their children, bringing the Okefenokee Swamp to a new generation that sorely needs such a refuge.