ELEKTRA Begs the Question... Who Asked for This Spin-Off? 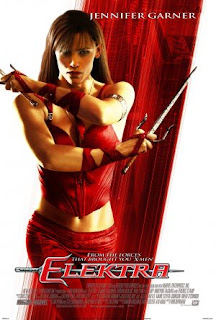 ” was critically trashed, didn’t fare that well at the box office and is considered even by comic book fans to be a bad movie. So how did it manage to beget “Elektra

?” These days, studios are not only looking everywhere for franchises, they’re making movies they know will only turn a profit when they’re released in those costly, extras-packed special edition DVDs. And nobody spends more money on that stuff than fanboys.

With their brightly colored, broadly drawn characters, comic book and sci-fi movies are more likely to spawn a spin-off than most other genres. Not that those efforts have always been successful.

As the Superman series

was losing power in the 80’s, the producers tried to invigorate the franchise by introducing the man of steel’s cousin from Krypton, Kara, aka “Supergirl

” (1984). Helen Slater was fine in the lead, but no power could conquer the campy supporting cast featuring Peter O’Toole, Mia Farrow, Peter Cook, Brenda Vaccaro and Faye Dunaway (as the sorceress Selena). A rambling plot involving the lost “omegahedron,” which powers the lost Kryptonian city of Argo serves as the framework to hang shots of Supergirl flying over horses and mooning over the hunky groundskeeper.

” caused as many heads to be scratched as “Elektra,” but that project was in the works for a decade. After the success of the first two “Batman

” movies, Michelle Pfeiffer was to reprise her “Batman Returns

” Catwoman in a feature directed by Hollywood’s biggest Goth-kid, Tim Burton. When that didn’t happen, cute-as-a -button Ashley Judd was tapped to play what would probably have been more of a Hellokitty-Woman. Whether either of those two films would’ve been better received than the 104 minute cosmetics ad starring Halle Berry is anyone’s guess.

Spinning villains into heroes is one thing, but how about when a movie takes an elderly supporting character with a long literary and cinematic history and transforms him into a hunky young leading man? In Bram Stoker’s novel, “Dracula

,” Abraham Van Helsing is an aged doctor who moonlights as a vampire slayer. In various films, he’s been portrayed by older actors such as Peter Cushing, Laurence Olivier and Anthony Hopkins. But the primary audience for CGI-laden monster movies isn’t interested in a geriatric lead, and so Hugh “Wolverine” Jackman suited up in the long black trenchcoat in this year’s “Van Helsing

What could’ve been the greatest spin-off movie of all has yet to pass the idea stage. For the past decade, Quentin Tarantino has toyed with the idea of making a prequel about “The Vega Brothers,” pairing two characters from “Reservoir Dogs

” (1994). . While the kinship is never mentioned in either movie, Vic “Mr. Blonde” Vega (Michael Madsen), the ear-slicing sadist from “Dogs” and Vincent Vega, the twistin’ hit-man of “Pulp” shared parentage in addition to less than acceptable career choices. Since both characters died in their respective tales, the movie would have to be a prequel. As recently as last April, the über-geek auteur was still talking about this movie, but the older Madsen and Travolta get, the more unlikely it seems. It might be as hard to buy as a greatly overweight Scotty (Patrick Doohan) manning the engines of the starship Enterprise at the age of 75...

It may seem odd that the Star Trek films

(themselves of course a spin-off from TV

) never inspired a movie or TV show focusing on one of the crew members from any Enterprise. Could it be that the producers were smart enough to realize that it was the interplay between those disparate characters that made that ensemble so memorable and long lasting? Maybe it’s because so many chunks of pop culture have delved into their histories, from pre-Starfleet Academy days well into what should’ve been retirement! Or maybe some of those celestial egos (we’re not naming names) would’ve become too unbearable on a solo mission. At one time, a planned prequel detailing Kirk and Spock’s time at the Academy was planned, but it now seems as unlikely as William Shatner reviving his singing career... oh, wait....

Maybe if he weren’t moonlighting as swashbuckling archaeologist Indiana Jones

” films, Harrison Ford could’ve done a Han Solo, uh, solo film. Certainly the only character from that series interesting enough (okay, except for Boba Fett) to hold his own for two hours, “Solo” (with Chewie by his side) could have taken us on a wise-crackin’ hyperdrive through the dangerous universe of intergalactic piracy a long time ago in a galaxy... oh, you know.

And what about CIA agent Felix Leiter, James Bond

” best) ultimately to no avail; The character was mostly chewed up by a shark in 1989’s “License to Kill

.” Maybe the producers felt that an interesting CIA agent would steal some shine from 007 (impossible!), but it’s interesting to envision what a film focusing on Leiter, with his buddy Bond as a minor character could’ve been like.

The only Bond character who came close to being spun off was not M, not Q, not even Miss Moneypenny (unless you count “Bridget Jones’ Diary

”), but Jinx Johnson, the American agent memorably played by Halle Berry in 2002’s “Die Another Day

.” Berry signed a three picture deal for “Jinx” films, but at this point it seems as if the super-sexy spy is destined to linger in limbo (which sounds like a Bond title).

As merchandising becomes more and more the key impetus for films being green-lit, we’re sure to see more movies taking established supporting characters and putting them in the lead. Both Wolverine and Magneto are getting spin-offs (or is that spins-off?) from the “X-Men

” franchise and Archie’s girlfriends Betty and Veronica are supposed to headline their own film (although no doubt the rest of the Riverdale gang will co-star, unless the whole thing is going to be a pajama party pillow fight... ah, to dream).

” spin-off, “The Adventures of Barliman Butterbur!”

POSTSCRIPT, September 2010:
Hey, lookie, I was wrong about STAR TREK