A Trio of Reissues from Sammy Davis, Jr. 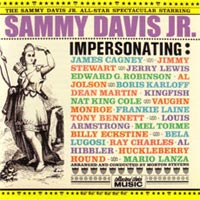 Sammy Davis Jr. may have been the butt of most of the jokes the Rat Pack tossed onstage, but he was also the most versatile member. He sang, he danced, he played instruments, he did impressions... sometimes all at once. The sad irony is that his later persona, the smarmy, bejeweled, showbizzy "Sammalah" has overshadowed the incredible talent that he possessed.

Collector's Choice has just reissued a batch of Sammy platters, not all of which really needed to return to the shelves. Maybe "Collector's Choice" is an apropos name for that label, because only the diehard Sammy collector is going to want The Sammy Davis Jr. All-Star Spectacular on CD.

What Sam didn't seem to realize is that what works live onstage doesn't necessarily translate to record—witness the dearth of ventriloquist albums. The first half (or, "Side One" as we used to call it) of All-Star Spectacular is Sammy doing a staple of his live act, his musical impressions. Sam tosses a fistful of impersonations of people like Al Jolson, James Cagney, Bela Lugosi, Jimmy Stewart, and Dean Martin into six songs that feel like twenty.

There's no denying that he's good at the task, but a novelty record is a novelty record and it gets old fast. The second half of the disc ("Side Two") is a straightforward side, with six tunes arranged by Morty Stevens and Neil Hefti (he of the "Batman" theme).

There were times that Sam's idolization of Sinatra got a little uncomfortable—like when he'd try to pull the tough guy threats on his band if they went off tempo. Frank could get away with it—Sam just sounded weasel-y. 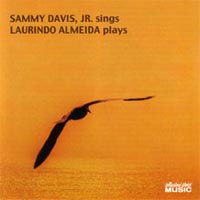 One would be tempted to call Sammy Davis Jr. Sings, Laurindo Almeida Plays an answer to Sinatra's Francis Albert Sinatra & Antonio Carlos Jobim—if it weren't for the fact that Sam's record with the Brazilian classical guitarist predates by one year the chairman's duet with his picker from that same hip land of the Sixties. Unlike Frank's disc, Sammy / Laurindo is NOT a bossa nova album, with Kurt Weill's "Speak Low" the only track that utilizes that sound. Rather, this is a charmingly soft (as opposed to "smooth") jazz album that's one of Sammy's few low-key showcases. 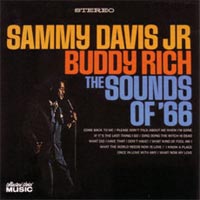 Sammy seemed to lack the ability to tell when he veered off the cliff into showbiz self-parody. The live album with Buddy Rich and his orchestra, The Sounds of 66, is good, but it at times feels like one of any given comedian's impersonations of the groovy-cat Sam.

The set features a few of Sam's clunkers, most notably "Ding Dong, the Witch is Dead" from The Wizard of Oz and the Bacharach cheeselog "What the World Needs Now is Love." But then there are super-swingin' versions of "Come Back to Me", "Please Don't Talk About Me When I'm Gone", and even a rare palatable take on the lesser Loesser chestnut "Once in Love With Amy." Why this reissue omitted "The Birth of the Blues" (previously on the DCC reissue) is a mystery, though, as that remains one of Sam's seminal songs.

Of these three discs, Sounds of '66 is the best, but since almost all of Sam's full length albums were spotty, you're still better off picking up Rhino's excellent four disc set, Yes I Can! The Sammy Davis Jr. Story

, an amazing overview of his career from Capitol, MGM, Decca, Warner Bros. , Reprise and more (including a full disc of live tracks). That set's main omission is Sammy's version of "Hi-Heel Sneakers" from his groovy 1970 Motown side, Something for Everyone