In the new film, “Boogeyman

, nor the Stephen King TV movie of 1982), Barry Watson plays Tim Jensen, a man traumatized by a childhood brush with the titular demon who’s gonna getcha! As an adult, Jensen lives in a home with no dark corners, no closets and a mattress on the floor (so the Boogeyman has no place to hide). Sounds like Tim has some issues, but we all carry scars from being terrified as a young’un.

I’m seven years older than my brother and when we were little (okay, when HE was little), I used to scare the poo out of him. I would, in a very Boogeymanish move, hide in his bedroom closet when he went for his nightly glass of chocolate milk. Upon his return, I’d wait for the right moment and shove the door open, yelling “BOOWAHHHHAHAHAHAHA!” in the most malevolent tone my cracking 13 year old voice could muster. And without fail, my brother would scream. Yes, I was a jerk.

Our strongest childhood memories tend to be of extreme stimuli, and it’s often unpleasant. Like when we learned Fire = Hot or why Mom and Dad sometimes locked the bedroom door. Or the first time a movie or TV show scared the bejeezus out of us.

My first memory of being truly terrified by a filmed image actually was from a cartoon. I was about five or six. It was a snowy December night and I was next door at my best friend Jimmy’s house watching a cartoon of Dickens

’ “A Christmas Carol.” This dark, moody Australian version was no bright, soft Disneyfied ‘toon. The animation was crude, so rough it almost had a woodcut quality to it. And it featured the most terrifying depiction of the ghost of Jacob Marley from any of the dozens of adaptations of that story. Marley appeared as a robed skeletal figure with long, bony hands that gesticulated as he warned Ebenezer Scrooge of his fate. Marley’s head was a skull with huge empty eyes, an elongated jaw with jagged, crooked teeth and a mane of white flames. His voice was smoky and demonic. After the show ended, I had to transverse a whopping hundred yards or so from Jimmy’s front door to my own, but it was dark, it was snowy and I was positive that the ghost of Jacob Marley was going to kill me.

He didn’t, of course (he’s not even the murdering type), and I lived to be scared another day. It was another cartoon that next got under my skin, and this time it WAS a Disney flick: their 1949 adaptation of Washington Irving

’s “The Legend of Sleepy Hollow.” As Ichabod Crane rode his horse through the woods, frogs, fireflies, birds, even the clouds themselves served as eerie foreboding to his inevitable fate. By the time the Headless Horseman finally made his appearance on his snorting black, red-eyed steed, I had curled up into a ball so perfectly round the cats started batting me around. This magnificent short (unavailable on DVD!!!) is far scarier than Tim Burton’s ill-advised 1999 “CSI” take on said tale

As I got a little older, it took a bit more to make me check under the bed, but there’s one film that, even “edited for television,” scared me so badly I couldn’t sleep: William Friedkin’s “The Exorcist

.” As a 12 year old, I had never seen such a shocking portrayal of what millions believe to be the ultimate evil. I was more used to Elmer Fudd in a red outfit with horns. To this day, I think “the Exorcist” is the scariest film of all time, a masterpiece of mood balanced with just enough jolts to make even the staunchest atheist covet a vial of holy water. 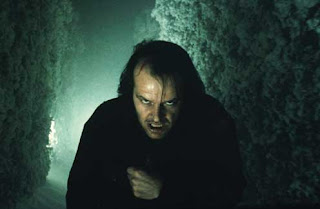 I think the last time I experienced that kind of debilitating childhood terror was late one Saturday night in the summer of 1980. It was towards the end of an episode of “Saturday Night Live” when a commercial for Stanley Kubrick’s “The Shining

” came on. The ad was just a montage of short cuts from the film set to Wendy Carlos & Rachel Elkind’s booming gothic theme. I felt a yellow sheen of dread wash over me and I slowly stood up and walked from the living room (with its three enormous picture windows) to the other end of the house... and my parents’ bedroom. Being 15, I didn’t go IN, but I stood outside of their door for a few minutes, just close enough to my Mommy that I felt relatively secure I wasn’t about to be dispatched by an axe-wielding Jack Nicholson.

Irrational fear instigated by pop culture is common. In 1975, “Jaws

” inspired such fear that otherwise sane humans were afraid to even get into a swimming pool, let alone the ocean. Janet Leigh said that she never again took a shower after seeing herself get killed in said bathing space by Norman Bates (Anthony Perkins) in “Psycho

.” For years, I myself used to punch the shower curtain every single time I walked into bathroom, just in case some knife-wielding maniac was waiting (as if my teenage wallop would’ve leveled him). Happily, my irrational paranoia has abated as I’ve aged and these days, the most frightened I get is any time I see an ad for an upcoming Drew Barrymore feature.