They're STILL Coming to Get You, Barbara! 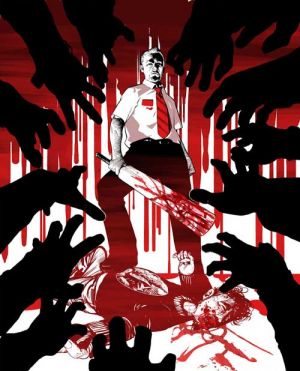 Cinematic trends come and go, especially in popcorn movies. Some of them unexpectedly resurrect, like the mini western boom of the late 1980’s, and then go away, seemingly for good. And there are some genres that just won’t stay dead... ah, you know where we’re going with this, don’t you?

The new zombie film, “Shaun of the Dead

,” and Zack Snyder’s smart remake of “Dawn of the Dead

” (yes, that’s where Rob got the name for the band) starring Bela Lugosi as Murder Legendre (where’s the band with THAT name?), a voodoo priest who raises the dead not so they can feast on flesh, but to be used as cheap labor in a Haitian sugar mill! No doubt some large American corporations have tried this cost-cutting device as well (who knows, perhaps the living dead made your sneakers). Lugosi would appear in more zombie films as his career decomposed, including “the Corpse Vanishes

.” with Tor Johnson as the most unthreatening, lumbering zombie in the history of the genre?

Of course, while tons of movies featuring zombies (most of them made for slightly less than your annual candy bar budget) continued to come out through the forties, fifties and sixties (with names like “Zombies of Mora Tau

,” and “The Incredibly Strange Creatures Who Stopped Living and Became Mixed-Up Zombies

”) none of them featured the buckets of blood and guts we’ve come to expect from that genre today. The 1952 serial, “Zombies of the Stratosphere

” had, you guessed it, no ingestion of any flesh. Not even a burger.

It wasn’t until a tiny little independent black and white movie came out in 1968 and completely redefined the genre. B-Movie king George Romero’s “Night of the Living Dead

” with its stark, simple visual style that stood in startling contrast to the content, instantly became the most unsettling horror movie to date. Groundbreaking (no pun intended) in its casting (Romero made the hero a black man), cinematography and effects (oh, flesh was eaten in this one), “Night” holds up spectacularly, 36 years later ,so much so that the 1990 remake by Tom Savini 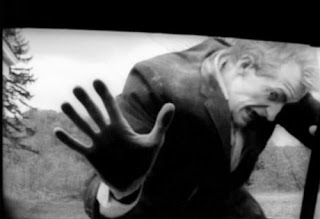 ” which amped up the blood as well as the satire by making the setting a Pennsylvania mall. Okay, so it wasn’t subtle satire, but not too many films were mocking America’s blind consumerism at the time. By 1985’s “Day of the Dead

,” the zombies had pretty much taken over the world, with just a handful of scientists and military holed up in Florida trying to figure out how to salvage what was left of civilization. Yeah, Florida’s the place to do that.

Among horror fans, there’s another series that, while not completely zombie-centric, is at least as highly regarded as Romero’s “Dead” films, and that’s the “Evil Dead” trilogy

” was so audacious in its bloody excess that many people couldn’t tell if it was a horror or a comedy. The genius of the film was that it was, in fact, both. Director Sam (“Spider-Man

” transports Campbell’s chainsaw-appendaged hero Ash to the 14th Century to do battle with an entire army of the dead in order to regain the Necronomicon, the Quickstart guide to raising evil spirits that got the whole series rolling in the first picture. There are about a hundred different versions of this series out on DVD, so choose wisely. If you buy the wrong one, you may set loose an evil side you didn’t even know you had.

,” the 1992 horror-comedy directed by multiple Oscar winner Peter (“Lord of the Rings”) Jackson. Poor Mama’s boy Lionel has enough trouble with his domineering mother BEFORE she gets bitten by a rat monkey and becomes a flesh hungry zombie, so you can imagine how difficult she is to deal with after she starts eating everyone in sight. Some have called “Dead Alive” the goriest movie ever made (at least before “Passion of the Christ”).

” (based on an H.P. Lovecraft tale) elicits laughter on the verge of shock. Jeffrey Combs plays Herbert West, a medical student who creates an elixir that can not only bring corpses to life, but severed body parts as well. The movie is best remembered for a scene we can’t describe here. But it takes a sexual euphemism to a literal extreme that had audiences shaking their heads in disbelief.

” brought something new to the formula: adorable zombies! The Creeds (no relation to the band) move to rural Maine, right by a road that traffics in speeding tractor trailers and right near an ancient Indian graveyard that resurrects those buried there. When the Creeds’ kitty goes splat, he is resurrected with seemingly no side effects. However, when the toddling young son meets the same fate, he comes back as an evil, scalpel wielding, murderous... but still cute as a button.... zombie! The movie is mostly memorable for some eminently quotable lines (“Now I wanna play with youuuuuuu!”) and Fred “Herman Munster” Gwynne’s performance as the wise, yet doomed neighbor Jud.

The “Cult DVD” section of your local mega-video store has tons of low budget zombie movies... like 1961’s “Blood of the Zombie

,” and its sequels, which upped the anxiety by making the living dead completely invulnerable (Romero’s zombies just needed a bash to the brain to stop them in their tracks). Then there’s “Gore Whore

” from that same banner year, “Chopper Chicks in Zombietown

Heck, even Bob Hope and Scooby Doo battled the undead in “the Ghost Breakers

” (1998), respectively. Actually, we’re not 100% sure that Scooby and the gang actually encountered flesh-devouring creatures in that one, but if “Shaun of the Dead” is a big hit, that day may come. Maybe the next live action Scooby film could feature Freddy and Daphne being gruesomely devoured by the resurrected kids from “Wheelie and the Chopper Bunch