Requiem for a Johnny

After a depressing September 11th, I awoke still sad on September 12th only to fall further into the dumps upon learning of the death of Johnny Cash. Oh, and John Ritter. But while Ritter’s death was far more of surprise, it didn’t carry the weight of the passing of a true legend in American music. Or so I thought.

For, through the wonders of television, I have been corrected.

Thanks to entertainment-themed TV shows, I now know that John Ritter’s impact on our culture was much greater than Johnny Cash’s. On most shows I saw that day, the amount of time dedicated to the Man Who Was Jack Tripper far outweighed that given to the Man in Black.

To add to the bizarre unbalance, John Ritter has now entered that pantheon of people in the public eye (like Sonny Bono, Aaliyah and Richard Nixon) whose legacy has improved exponentially upon death. Suddenly, Ritter has become an irreplaceable genius rather than a serviceable practitioner of his art. 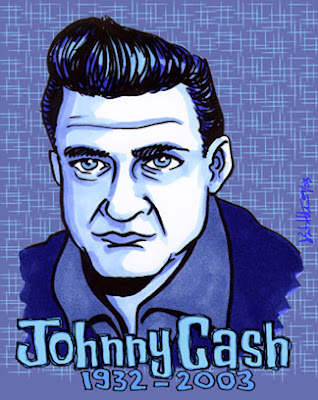 Please don’t get me wrong, I’ve got nothing against John Ritter. I even went through a strange THREE’S COMPANY

phase last year where I was watching it on Nick at Nite every morning. But let’s face it, aside from a few great turns in a few small films (SLING BLADE

specifically), Ritter was a star of hack sitcoms. THREE’S COMPANY may be iconic television, but precious few people would deign to call it Important or even Great (only in television could such popular crap be designated a “classic.”)

Now, J.R. “Johnny” Cash, on the other hand, is an indisputable American classic of the grandest scale. Influencing every generation since the fifties, his career was a remarkable display of passion, originality, perseverance and reinvention. He is to country music what Sinatra is to pop or Louis Armstrong is to Jazz: the quintessential Artist.

But according to shows like ENTERTAINMENT TONIGHT or ACCESS HOLLYWOOD, he was just a guy who wore all black and sang “I Walk the Line” and then covered a Nine Inch Nails song. Apparently, if Henry Winkler would’ve died the same day as Frank Sinatra, EXTRA! would have spent fifteen minutes showing clips from HAPPY DAYS

before squeezing in a quick five about that guy who sang “New York, New York.”

The sad fact is, while it may be a ridiculously potent artform, music does not have the mass impact that television does. A smash album sells a half a million copies while a network TV show that is watched by less than ten million people is deemed a failure and is cancelled.

Okay, Okay, I know what you’re thinking: “What do you expect from TV, especially shows like ENTERTAINMENT TONIGHT?” And you’re right, what I EXPECT is just what I got: Pretty “anchors” feigning emotion and delivering piffle. But I’m enough of a pop culture dork to not let go of the tiny hope that somewhere within these organizations there’s SOMEBODY who wants to fight the good fight and give due to those who deserve it. Maybe even teach the people something. Call me crazy.

In the meantime, I can mourn Johnny Cash in my own way. I’ve been playing the Sun

records, but his late American Recordings

albums are his most poignant epitaph. Nothing brings the tears more than the final song on his final album, AMERICAN IV: THE MAN COMES AROUND