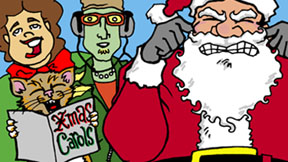 All opinions about music are subjective. The most learned scholar's thoughts on Bizet's "Carmen" — or Men Without Hats

' "The Safety Dance," for that matter — are every bit as valid as those of the NASCAR dad who just heard the piece for the first time in a commercial.

But when it comes to Christmas music, it's even harder to be objective. More than with any other genre, our feelings about holiday music are often tied to strong personal memories. There exist punk rockers who get misty over the Ray Conniff Singers belting out "Frosty the Snowman."

Still, there are some Christmas albums that are so jaw-droppingly horrible that it's hard to imagine anyone using them for anything other than makeshift tree ornaments.

The most well-known offenders come from the top of the charts: Teen pop stars, new agers, country and R&B artists perennially flood the market with holiday albums as leaden and unenjoyable as your average fruitcake. Listing them would take up MTV's entire bandwidth, so we'll concentrate on Christmas albums that seem, even within the unique context of Christmas records, to have been a bad idea from the start.

Novelty records are called that for a reason: Novelty wears off. It's hard to imagine anyone who can sit through an entire Jingle Cats Christmas album, let alone two. Enough people bought 1993's Meowy Christmas

, comprised of cats' meows edited to approximate the melodies of Christmas carols, that a sequel was whelped, Here Comes Santa Claws. Not to be outdone, the Jingle Dogs let out Christmas Unleashed the following year. These housebroken holiday albums are so migraine-inducing that they make the Chipmunks seem soothing.

, who also released two Christmas albums, dueting with such luminaries as Celine Dion, Cher, Donny Osmond, Ricky Martin, Lauryn Hill and many more, including Elmo the Muppet. This is the breed of awful vanity project that only someone with Rosie's power can get off the drawing board. However, since the proceeds from these records go to charity, we can't be too mean, but taken on their own merits ... well ... never mind ...

Ever had to suffer through the strained, off-key versions of carols sung by relatives? That's basically the effect achieved by Christmas With the Brady Bunch

, the first and most painful of the many Brady-related albums. Regardless of how strong your nostalgia for the Bradys may be, there's no enjoyable "Sunshine Day"-esque kitsch quality to these tracks: This is just a wad of traditional carols sung badly by melodically challenged kids. It actually makes one pine for the vocal stylings of Florence Henderson ... or even Sam the butcher!

How many Bon Jovi fans own his holiday album? No, not his appearances on the Very Special Christmas series, but his performance on 1980's Christmas in the Stars: Star Wars Christmas Album

, when the well-coiffed singer was still the struggling John Bongiovi. The record is one of those knockoff slabs of product that makes Jessica Simpson's Re-Joyce seem like Handel's sequel to "Messiah." The Meco-produced music is cheesily synthesized, and the songs are supposed to be funny in the way old vaudeville jokes are funny (as in: not). Anthony Daniels (C3PO) "sings" about "The Odds Against Christmas" (365 to 1, get it?) and probably not even Han Solo ever asked the question, "What Can You Get a Wookiee for Christmas (When He Already Owns a Comb?)" This is only for the brand of Star Wars geeks who are already lined up for next summer's "Episode III."

The connection between "Star Wars" and Christmas might seem like a stretch, but it's nothing compared to the unholy alliance of classic pop vocals and dance beats. The 2003 album, "Christmas Remixed: Holiday Classics Re-grooved

" takes vintage chestnuts, like Bing Crosby singing "Jingle Bells" and Mel Torme's "The Christmas Song," and turns them over to DJs such as Dan the Automator and Baz Cuts for some beats and loops — and the resultant songs are every bit as horrifying as you'd imagine. It's impossible to envision a fan of either of these genres (or even that handful of broad-minded folk who appreciate both) having any reaction to this amalgam other than a wince of pain.

. It's one thing for a few members to resurrect the band's name for cash-in tours, but a Christmas album? That is so not rock, dude — especially with some of the faux-classical pieces mixed in with the southern blues rock on this weirdly juxtaposed collection. Thankfully, there's no "Free Partridge" ...

would seem to appeal to either baby boomers who hate winter but love Christmas or ... well, actually, that's the only possible audience for this record we can imagine. A faux-reggae "Jingle Bells" that incorporates steel drum? Clearly, the sunshine has been getting to someone.

And we haven't even gotten to the holiday albums from the Looney Tunes (two albums of unfunny nuggets that must have left Mel Blanc spinning in his grave), the California Raisins, Mr. Hankey, the Crypt Keeper, Dread Zeppelin, Elmo & Patsy (the other Elmo), and this year we've been treated to Hung for the Holidays by, you guessed it, William Hung. And we really don't need to go into detail about last year's Flatulina's Fabulous Holiday Spectacular