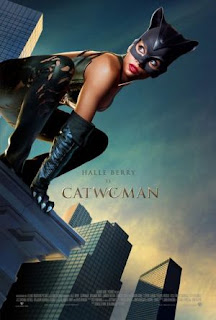 Perhaps you’re one of the many people for whom the new Catwoman movie has caused some confusion (besides the puzzle of why this movie was made in the first place). Just who the heck is the Catwoman? Where did she come from? How many different lives has she had, anyway?

#1 in 1940. In her second appearance in the next issue, she wore a full cat-head mask, but it wasn’t until years later that she began wearing slinky costumes. By the 1990s, Selina Kyle’s origin had been updated to make her a former prostitute turned urban avenger, part villain, part hero. DC Comics’ latest “secret file” on the character lists her occupation as a “classy independent woman” who lives outside of the law, but fights for the downtrodden and the outcasts.

was first adapted to another medium, and to most, that incarnation remains the most iconic. Julie Newmar was the first of three Catwomen to match wits with Adam West’s BATMAN in the 1960s TV show. The impossibly curvaceous 5’10” former ballet dancer only appeared in six two-part episodes, but Newmar’s slinky turn in the sparkly black catsuit set the model for pretty much every subsequent onscreen Catwoman.

When Newmar proved unavailable for the quickie 1966 feature film BATMAN

, 1955 Miss America Lee Meriwether picked up the mantle of Catwoman

as well as her faux alter ego Comrade Kitanya 'Kitka' Irenya Tantanya Karenska Alisoff, a love interest for Bruce Wayne. Meriwether was a little too squeaky clean for the part, and her purr was the least convincing of them all. Well, except for Sean Young, but we’ll get to that.

. A tiny 5’4”, Kitt wasn’t as physically imposing a Catwoman as her predecessors, but her smoky sensuality and purrrrrfect voice made her the most exotic. The first African American TV supervillain, Kitt’s casting sadly had nothing to do with breaking stereotypes. The studio cast a black woman so that audiences would assume Batman wouldn’t be romantically interested and would focus on the new character of Batgirl instead.

The Catwoman of Filmation’s 1968 BATMAN cartoon looked like Marlo Thomas in a green jumpsuit (have you ever seen a green cat?) and tooled around Gotham in a green catmobile lined with pink fur! Curiously, she was given a harsh screechy voice that sounded like any comedian’s impression of a cranky old lady.

Perhaps the only time Catwoman ever seemed desperate was when Sean Young was very publicly vying for the role in 1990. Young appeared in a Catwoman suit on the Joan Rivers Show and implored the producers to cast her in the role for which she thought she was perfect.

Nobody agreed, and the part of Catwoman in Tim Burton’s plodding 1992 sequel BATMAN RETURNS

went to Michelle Pfeiffer. This Selina Kyle was a feline of a totally different stripe. Clad in her homemade black vinyl costume, Pfeiffer’s Catwoman was a ticked off feminist, not so much out to pillage and plunder as to emasculate alpha males like Batman. A victim out for revenge, this Catwoman’s sexuality was anything but playful.

Premiering in 1992, BATMAN: THE ANIMATED SERIES

featured a Catwoman who was now a socialite and animal rights activist (in addition to being a Robin Hood who robbed Gotham’s corrupt rich). It was also the first time a superhero cartoon managed to slip any hint of sexuality into the adventure and throughout the history of that cartoon, Catwoman alternately expressed interest in both Batman and Nightwing (the grown up former Robin). Talk about finicky! A planned spinoff Catwoman cartoon never came to fruition.

The next time a Catwoman came to the tube, it was in the form of her offspring. 2002’s BIRDS OF PREY

starred Ashley Scott as the Huntress, the daughter of Batman and the Catwoman. Set in a future “New Gotham,” the show teamed the Huntress with Oracle, the former Batgirl (crippled by the Joker) and Dinah, the best superhero name ever. Somehow this Catwoman Jr. had catlike super powers, something shared only with the Halle Berry version. But those powers weren’t enough to save this clumsy melding of Cosmopolitan and comic books and BIRDS OF PREY mercifully only lasted one season.

The character of Catwoman has inspired or at least influenced other sleek femme fatales over the years. THE MATRIX’ Trinity, BLADE II’s Nyssa, Spider-Man’s Black Cat

and a good chunk of James Bond’s female foes and allies owe at least a little debt to the the lovely larcenist with the cat o’ nine tails.

Only time will tell where Patience Philips, the new Catwoman

fits into the pantheon of Catwomen. But it’s doubtful that the image of Julie Newmar in the catsuit will ever be replaced by Halle Berry in shredded pants and open toed shoes...hah? Who ever thought that was a good fashion choice for super-doings? High heels on superheroines are stupid enough, but at least Storm and Jean Grey knew enough to keep their toes covered!
_________________________________________________
ORIGINALLY POSTED in REWIND on MTV.COM, July 2004
Posted by Pops Gustav at 4:10 PM