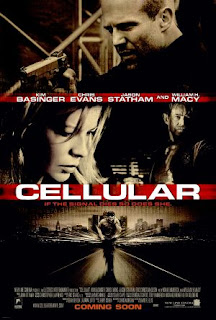 ,” a smashed rotary telephone can reach only one number. The dialer is kidnap victim Jessica Martin (Kim Basinger) and the recipient is Ryan Hewitt (Chris Adams). After being convinced that this is no joke, Hewitt races against time and roaming charges to rescue the entire Martin family. Can you hear him now?

As technology advances, it becomes harder and harder for screenwriters to place protagonists in old fashioned peril. Think of how many movies launch from the premise of someone simply stranded by the side of the road or lost somewhere. But in these digital aughts, almost everyone’s got a phone strapped to them somewhere. Luckily, with cellular technology still in its maddening dark ages, it’s easy to accept that the victim can’t get service or the phone’s charge has run out, but that conceit is going to get old as fast as “the line’s gone dead” did in the rotary age.

Some classic movies have used the telephone as a central plot device. In 1948’s “Sorry, Wrong Number

,” a bedridden Barbara Stanwyck accidentally cuts in on a party line to overhear a murder being plotted (her own). Stanwyck then spends an aggravating night on the phone, trying to either get connected by cranky operators or get through to the proper authorities, proving that the more things change, the more they do indeed stay the same.

,” a former tennis pro played by Ray Milland plots to murder his wife (Grace Kelly) to gain her inheritance, as well as some revenge for her affair with a writer (Robert Cummings). Milland blackmails an old acquaintance into doing the dirty deed and concocts a plan that involves a late night phone call. With the killer strategically hidden behind the curtains near the phone, Milland dials home, which brings Kelly into place. If she lived in an era where she was able to turn off the ringer on her cordless phone, Milland may not have been able to come up with his (unsuccessful) plot.

Based on an old urban legend, 1979’s “When a Stranger Calls

” tells of a babysitter (Carol Kane, aka Simka Gravas from “Taxi”) who receives a series of threatening phone calls. The calls escalate until the sitter discovers not only that the kids in her care have been killed, but that (all together now) “the call is coming from inside the house!” Today, even if the house didn’t have caller ID, the sitter could’ve star-sixty-nined the first call, seen the number and gotten the heck outta there! End of film! 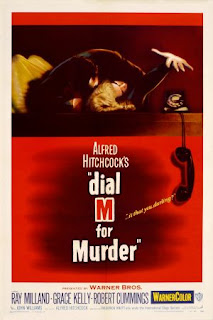 In fact, many classic films would be drastically altered by today’s technology. In “Rear Window

,” Jimmy Stewart could’ve called Grace Kelly’s cell to warn her of wife-killer Raymond Burr’s return to the apartment she was searching. “A Streetcar Named Desire

”’s Stanley Kowalski could’ve drunken-text-messaged his wife “STELLA!!!” to come home instead of disturbing his neighbors by screaming it from the bottom of the wrought iron staircase. Elizabeth “Maggie the Cat” Taylor could’ve just snooped at the internet browser history on her husband Paul “Brick” Newman’s computer to confirm her suspicions about his sexuality in “Cat on a Hot Tin Roof

.” Maybe if poor Janet Leigh would’ve had a GPS tracking system in her car in “Psycho

,” she wouldn’t have gotten lost and ended up at the Bates Motel and I’d be able to take a shower without locking the door.

Then there’s pretty much every slasher film from “Halloween

” on, in which every person hiding in a closet could’ve called 911 and at least had the cops be on the way before they were punished for their promiscuity. And of course, if he had a reeeeallly good plan, ET actually could have simply phoned home.

” was released last year, the most unbelievable plot point (of many) was that there was still a working full sized public phone booth in the center of Manhattan. Heck, a joke was made about the death of those boxes over twenty years ago in 1978’s “Superman the Movie

” when Clark Kent, trying to find a place to change into the man of steel, could only find the open air kiosks.

But filmmakers seem reluctant to give up the old fashioned telephone as prop. Their esthetic appeal with the loud, jarring rings and physical heft has been evident in some recent films of vision such as “The Matrix

.” Those grand old chunks of machinery are certainly going to become relics of the past, and while cell phones and Blackberries have their own ticks, they’re just not the same. It brings to mind Jerry Seinfeld’s bit about not being able to dramatically hang up on someone with a cell phone. Instead of slamming the phone down, the hard clash of plastic on plastic causing the actual bell inside the housing to resonate, you gingerly press the little red button because if you push it too hard, you’ll break your phone.

Modern technology may be many things; It’s convenient, fast, sometimes sleek and maybe even sexy. But it’s not dramatic. As our conveniences become smaller and smaller, they lose the demand of physical interaction that brings drama or humor to movies. it’s becoming a hands-free world, and that’s gonna make movies just a little bit duller.