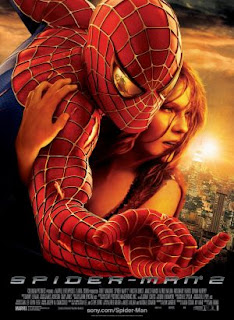 A costumed crime fighter struggles with a choice: Should he give up being a superhero for a normal life and the love of a woman or should he stay true to his destiny? The dilemma is complicated by a powerful threat that only he can face.

." The familiar plot thread was first explored when the Man of Steel yearned for the quiet life of Clark Kent in 1981's "Superman II

" (born in an era when sequels still used Roman numerals). If you spent your weekend being consumed with Spider-Man's personal conflict, physical daring and honest heart, you may want to spend time with the movie that laid the groundwork 23 years ago.

The Superman movie series of the late '70s/early '80s

set a precedent for comic-book franchises to come. "Superman: The Movie

" was a commercial and critical hit in 1978, and suddenly Hollywood was taking comics seriously, a cycle that repeated itself when the first "Spider-Man

With financial and critical expectations high, the Superman franchise produced a sequel that delivered on both counts (again, sound familiar?). Fans of the series continue to debate which was the better film, "Superman: The Movie" or "Superman II" ("III

" are never in contention, and the less said about them the better).

While director Richard Donner's 1978 original had a more majestic scope, many prefer the nonstop action of its sequel (partially shot at the same time as the first one but finished by "A Hard Day's Night

" director Richard Lester after Donner was fired by the producers). Like "Spider-Man 2" (and really, "X2

" and all superhero sequels to follow), "Superman II" benefits from not having to spend time on back story. The first movie took care of the origin, so the action can get rolling right away in the second installment.

When Lois Lane discovers that Clark Kent really is Superman, the Man of Steel flies her to his arctic Fortress of Solitude and begins the wooing process, which includes giving her exotic flowers, making her dinner and, oh yeah, giving up his superpowers so they can be together (and, in a controversial move at the time, be together). The new couple leisurely drives home from the North Pole only to discover in a Canadian diner that three Kryptonian villains have been released from the Phantom Zone and are terrorizing the world.

Thanks to Lois' poor housekeeping skills, Superman is able to regain his abilities and save the day. Of course, there's still the problem of Lois now knowing his secret identity, something he takes care of by giving her a hypnotic kiss that erases the memory of their time together. The lost superpowers, longing for love, identity crisis and ultimate return to super-service should ring familiar to anyone who's seen the web-spinner's second installment.

"Superman II" suffers from some lazy logic (beyond the aforementioned hypnotic kiss), but it is so entertaining that you forgive it. Terence Stamp's delightfully megalomaniacal General Zod remains the yardstick against which all comic book movie villains should be measured, richly spouting such great lines as "Is there no one on this planet to even challenge me?!"

The climactic battle in and over the streets of Metropolis still excites more than two decades later, even though it was made in the days of blue screens, wires and miniatures. The vastly improved digital effects in "Spider-Man 2" (Spidey rarely looks like a video game character in this movie) can only hint at what could be done in a Superman movie today if Warner Bros. ever manages to get that franchise back off the ground and up, up and away.

But the other thing that the Spider-Man movies have in common with the Superman films is how faithful they are to the spirit of the characters. Both series wholeheartedly embrace the cornball sincerity of their heroes (unlike the far more nihilistic "Batman

" movies or whatever the heck "Hulk

So, if you're one of the millions who saw "Spider-Man 2" over the weekend and were moved by its smart balance of action and heart, you may want to check out the superhero movie that set the blueprint.