The Past is Future... or Is It the Other Way Around? 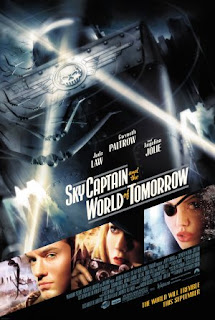 The ironic draw of “Sky Captain and the World of Tomorrow

” is to see highly advanced computer technology create an utterly old fashioned, retro adventure. Unlike “Star Wars,” “Hulk” or other CGI heavy films, “Sky Captain” isn’t trying to create a fantasy photo-realism on screen so much as a hyper-stylized live action sepia toned cartoon (the kind rendered in ink and paint, not pixels).

from the 1940s. Not only does “Sky Captain” try to recreate the dramatic lighting, set design and staging of those groundbreaking Art Deco shorts, but some of the robot and vehicle designs seem to spring directly from Superman episodes like “the Mechanical Monsters,” and “the Bulleteers.”

There’s another page taken out of Superman in “Sky Captain.” Gwyneth Paltrow’s character of Polly Perkins may work for the Gotham City Chronicle, but the reckless, headstrong reporter is a blonde version of the Metropolis Daily Planet’s Lois Lane, right down to the alliterative name.

in him. In the 40s, the Blackhawks were an international cadre of fighter pilots who battled the Nazis in their Grumman Skyrockets, housed on Blackhawk Island, a hidden outpost in the Atlantic Ocean. Blackhawk even had his own Saturday morning serial in 1952.

” and “Incredible Science Fiction” served as poorly printed four color blueprints for some of the “Sky Captain” designs and themes.

Back on the silver screen, “Sky Captain and the World of Tomorrow” owes another debt to Fritz Lang’s groundbreaking 1927 science fiction epic, “Metropolis

.” While film historians will forever debate the political and social merits of the tale of the workers exploited by the wealthy, nobody ever questions the visual impact of the film. “Sky Captain” is more Art Deco than German Expressionism, but the soft focus, huge imposing structures and stark angular lighting of “Metropolis” can be seen in the new movie along with shots of airplanes soaring through skyscraper lined streets.

” comic strips and movie serials of the 1930s and 40s. While those Saturday morning short films had such low budgets that their special effects weren’t even convincing sixty years ago, there are some elements that have stood the test of time. In “Sky Captain,” that’s most evident in the design of the metal-melting ray gun invented by Sky’s tech expert Dex (Giovanni Ribisi).

There are also tributes to “the Wizard of Oz

” in Conran’s labor of love. The eerie posthumous presence of the digitized image of Sir Laurence Olivier (“courtesy of TM©2003 Wheelshare Limited as successor to the estate of Sir Laurence Olivier by www.dmgworldwide.com, www.laurenceolivier.com” which would look really awkward above the title) as Dr. Totenkopf (that’s “dead head” in German) is an homage to the projected face of the Great and Powerful Oz in the 1939 musical. And as Joe and Polly run from giant prehistoric creatures (including one who reminded us of Pterri from “Pee Wee’s Playhouse

”) while making their way to Totenkopf’s secret jungle lab, you half expect the giant ape to come stomping off of the set of Peter Jackson’s currently-filming remake for a cameo.

” (1977). With its giant machines, clanking ambience and smoky oversaturated visuals, the eerie cult film has a similar resonance to some of the more insidious moments in the World of Tomorrow. 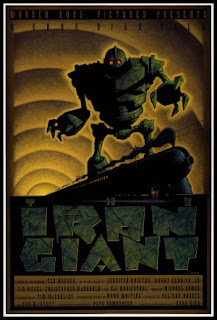 Just how much interest the general public has in revisiting the action and adventure of a simpler time is still a big question mark. “Raiders of the Lost Ark

” and its sequels aside, most attempts to recreate those thrilling days of yesteryear have missed the mark, either creatively or at the box office. Predating “Raiders” and “Superman

” was a campy take on the pulp hero that took its cue more from Adam West’s “Batman” than anything. About twenty people saw it in the theater. Decades later, 1994’s “The Shadow

” still felt slightly off in their attempts to capture the spirits of those depression-era crimefighters. 1991’s “the Rocketeer

” was somewhat more successful, but it was based on a contemporary comic set in the 40s rather than an actual vintage pulp. Besides, that movie starred timeless beauty Jennifer Connelly and we lose all objectivity when she’s onscreen.

Ironically, what may be the closest movie in spirit to “Sky Captain” was one of the last hand animated features, Brad Bird’s brilliant but largely unseen 1999 animated film, “the Iron Giant

.” Set in the paranoid McCarthyist era of the 1950s, the movie tells of a friendship between a lonely boy and a huge robot from outer space. “the Iron Giant” mixes beatniks, jazz, commies and nuclear anxiety with heart and humor and terrific animation, achieving “Sky Captain”’s goal of feeling completely retro and modern at the same time.

Whether “Sky Captain and the World of Tomorrow” will elicit an Indianajonesian mania or a Phantomlike ennui remains to be seen. Paramount Pictures seems nervous, as some of the advertising seems to be trying to distance the film from its unabashedly retro tone, using the curious anachronistic tagline “The download has begun” in one TV ad. But regardless of the box office response, Kerry Conran and his fearless band of computer nerds have not just raised the bar in what CGI can accomplish, they’ve taken it in a completely fresh direction. Aspiring Lucasphiles, please take note.