It May Look Like a Chestnut... (THE DICK VAN DYKE SHOW on DVD)

For my moolah, the single greatest situation comedy of all time is THE DICK VAN DYKE SHOW. Now the first two seasons of Carl Reiner’s brainchild (which originally ran on CBS from 1961-63) have been released as DVD box sets. 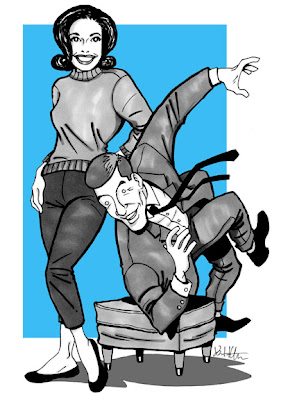 Yes, all those things that have been said a million times about the show are true. There are four simple, yet undeniable reasons that it was groundbreaking and remains timeless:
1) For maybe the first time, you not only knew what Dad did for a living, you saw Rob Petrie at work as much as you did at home. And both lives impacted each other, just like in real life.
2) The chemistry between Dick Van Dyke and Mary Tyler Moore was indeed palpable. This was the first TV couple that actually seemed like they were in love (and lust), not just either parrying (ala Lucy & Desi and Ralph & Alice) or parenting (ala Ward & June and Jim & Margaret).
3) The writing was smart, sophisticated and flat-out hilarious.
4) The casting was one of those rare brilliant / lucky strokes of alchemy that created a true ensemble that worked beautifully together.

Of course, there are lots of other reasons THE DICK VAN DYKE SHOW

remains popular and influential more than four decades after its debut. The graceful physical comedy of its star is one reason. Another is the 23 year old ingenue who made “Ohhhhh, ROB!” a catch phrase.

Seriously, has there ever, in the history of television, been a babe more fabulous than Laura Petrie? Okay, so Lorelei Gilmore comes close, but it’ll be some decades before Lorelei attains the classic status of Laura Meehan / Meeker Petrie. She was smart, funny, limber (!), supportive, just a wee bit jealous, goofy at times, glamourous others. And beautiful. Did I mention beautiful? Holy cow, was she beautiful.

The DVD sets are everything TV box sets should be, especially sets of vintage shows. Each episode is digitally remastered from the original 35mm negatives, restored to its full length with over three minutes of restored footage that was edited for syndication. Bonus materials abound, including photo galleries of promotional stills, sponsor ads, show promos, interviews with the cast and audio commentary on a handful of episodes from Dick, Carl, Rose Marie, Ann Morgan Guilbert and Larry Matthews.

Actually, the commentaries are the least satisfying bonuses. Sadly typical of DVD commentaries, there’s precious little background or insight and a whole lot of head rattling and cobweb dusting. Hindered by the fact that they were recording while watching the show with NO SOUND (at times for the first time in decades), the cast spends an awfully lot of time trying to remember what the characters on the show were SAYING. Why, oh why can’t people record commentaries with one earpiece playing the show so they can actually comment on what’s happening? Or at least watch the episode once through before they start taping?

Another bonus is a full episode of STUMP THE STARS, a charades game (also known as PANTOMIME QUIZ) that ran through the fifties into the early 60’s. Included here is a show where Dick, Rosie, Morey and Mary challenge Sebastian Cabot, Diana Dors, Beverly Garland and Ross Martin... and lose! It’s a bizarre little time capsule, but not half as funny as the game of charades from episode 63, “All About Eavesdropping” (On the Street Where You Live!!!!).

The real gem of a bonus is on the first set: HEAD OF THE FAMILY was the unsold pilot that would later become THE DICK VAN DYKE SHOW. HOTF (filmed in late 1958) had the same plot, the same characters, but a totally different cast, including creator / writer Carl Reiner as Rob Petrie (here pronounced like the dish). Seeing Morty Gunty playing a 23 year old Buddy Sorrell is jarring and just... wrong. Plus, Gary Morgan makes Ritchie Petrie a thousand times more grating than Larry Matthews ever was. While not awful, HOTF clearly shows that good writing is not enough to make a sitcom work, and makes THE DICK VAN DYKE SHOW shine even brighter in contrast.

Sophisticated, sarcastic, sweet, silly, slapstick and a lot of other alliterative adjectives, THE DICK VAN DYKE SHOW was rare perfection. Even at its quaintest, it never feels dated. Forty years later, it remains timeless, laugh out loud funny, genuinely touching and utterly believable. This is a DVD set that won’t just sit unwatched. This is an ottoman worth tripping over. 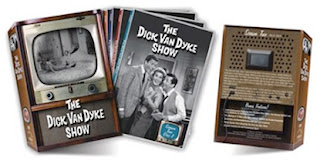