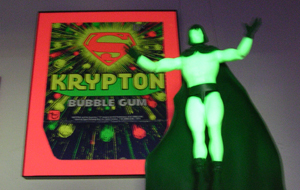 I’ve got a lot of adolescent trappings in my apartment. Comic books. Too many records and CDs out in the open. Actions figures placed about the place. Framed posters of James Bond films, rock bands and comic book covers. I’ve accepted that I’m now and forever a geek and don’t feel ashamed of anything on display in my home.

With one exception: a functioning 17” Black Light.

No, it’s not in the living room or even the bedroom. My black light hangs in what I refer to as “the CD alcove,” a three-foot hallway between the living room and the bedroom into which I’ve built floor to ceiling shelving for most of my CDs. Placed at various points on the shelves are numerous glow-in-the-dark items: Some super balls, other gumball machine and variety store toys, a few pieces of Kryptonite, a Swamp Thing action figure, some silly putty, a DC Direct Spectre figure, a Creature From the Black Lagoon mini-statue and more. Hanging over the doorway across from the fixture are two fluorescent pieces of art: a glow-in-the-dark postcard of two people kissing and the top to an old box of Krypton Bubble Gum from the 1970s. 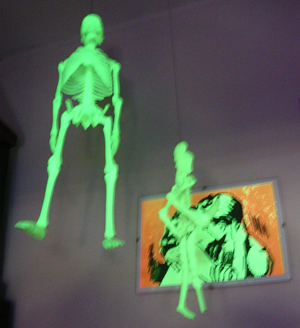 I’ve had a black light since I was about 10, when Terry Jensen gave me his old four foot fixture (which I still have, and which still works, but is stored in my parents’ basement). The Jensens were a young married couple who moved across the street when I was little. Over the years, I would be the happy recipient of much of the detritus of Terry’s youth as he felt he needed to discard them, including (topping even the black light) a huge pile of old Playboy Magazines.

In high school, I had a few black light posters, but not of the Led Zeppelin / stoner variety. I never smoked pot and my aesthetic was always more geek than rebel. I had a fluorescent Dracula poster from Dynamite Magazine and one of those Marvel Comics black light posters from the 60s. I have a vague recollection of owning one velvet black light poster, but for the life of me, I can’t recall what it was.

The perhaps sad fact is, along with Bugs Bunny cartoons, punk rock and candy, I still love glow in the dark stuff. Those pieces of junk loaded with Strontium Aluminate or Zinc Sulfide that create that mystical fading glow still fill me with an awe similar to when I see really nice cleavage. Okay, not quite like that, but they’re two visual stimuli of which I’ll never tire. Hey, at least I’m secure enough with myself to admit it.

Because I know I’m not alone. Like junk food, Friends and the Darkness, glow in the dark stuff is a guilty pleasure for many so-called grownups. At the bar where I tend, the door guys use a black light hand stamp and I’ve seen hundreds of people ooh and aah at the green “Snuka” as it phosphoresces on the top of their right (or left, if it’s a double show) paw. And who doesn’t love that time of day during the winter when the level of light makes the snow seem to glow a soft purple?

I’ve contemplated taking down the black light a handful of times. But then I look around at the pile of Peanuts books, the framed 1960s Batman puzzle, the autographed Life in Hell print, the shelf of cartoon DVDs and books, the (as of this writing) 70 Superman action figures and I think, “Nah. This is me,” and I flick the switch.

Email ThisBlogThis!Share to TwitterShare to FacebookShare to Pinterest
Labels: 2004, for real