. I was astounded at the breadth and depth of the book and wondered how someone in his mid twenties could have crafted such a massive achievement so early in his career.

With the publication of CARNET DE VOYAGE, I now understand a little bit more about Thompson’s work habits... he is a nonstop drawing machine (he drew more between March 5th and May 14th of 2004 than I have in the past three years). But no... machine is wrong... there’s nothing mechanical about his work. Art flows out of Thompson’s brush pens with the organic fluidity of a true master. He may well be the greatest natural cartoonist of his generation... hell, even a handful of others.

CARNET DE VOYAGE wasn’t even supposed to be a book. While traveling through France, Barcelona, the Alps and Morocco last Spring to promote BLANKETS, Thompson’s omnipresent sketchbook suddenly became his next project. In his introduction, the typically self-effacing artist dismisses it as ”a rather self-indulgent side project.” 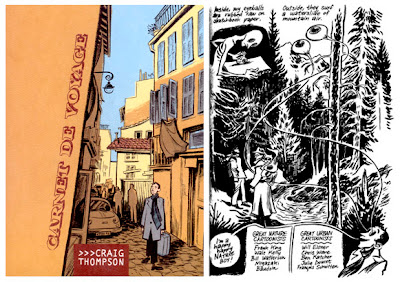 Yes, there’s lots of self-indulgence, but no more than any other writer or artist’s work is self indulgent. Smarting from a recent breakup, suffering from crippling rheumatoid arthritis exacerbated by nonstop signings, sketches and portraits of locals (many of whom demand money for the privilege of being models), Thompson’s travelogue is filled with the kind of subjective experience that’s only interesting to others if it’s told well.

with the more naturalistic impressionism of BLANKETS, Thompson allows us to experience everything he does: The homesickness, the culture shock, the thrill of the new and the comfort of other people. His passion for beauty, be it architectural, arboreal, feline, culinary or (often) feminine is all delineated with an artistic embellishment that’s more effective than any photograph could be.

That’s the power of comics; They can be (in the right hands) surreal and realistic at the same time. Thompson is as much a master of capturing the empirical world as he is conveying his inner demons (and he’s got a lot of ‘em... this boy is one tortured, sensitive artiste). He may dismiss CARNET DE VOYAGE as “not (his) next book,” but it’s the richest, most rewarding graphic novel I’ve read since... well, since BLANKETS.