I have a theory about Christmas music: If you didn’t hear it as a kid, you don’t like it as an adult. Critical judgments on the quality of the music, the originality of the arrangements, the vocal range of the singer are all irrelevant. What’s important is how the music makes you feel. Barring some Dickensian epiphany, few people who didn’t in their youth hear the Ray Conniff Singers belt out “Rudolph the Red Nosed Reindeer” are going to want to hear it as an adult.

Luckily, my parents stacked piles of Christmas compilations on the old Magnavox every year, so I grew up with extremely fond memories of Steve & Edie, Julie Andrews, Johnny Mathis, Nat King Cole and Bing Crosby rhapsodizing about December 25th. But because his songs rarely appeared on label compilations, I never heard Frank Sinatra Christmas songs until many years later. And, up until this year, only his Capitol Christmas album and some of his Columbia holiday material were in print.

Well, 1994 brings two new Christmas gifts to Sinatraphiles (three, if you count DUETS II...I don’t). Columbia Records’ CHRISTMAS SONGS BY SINATRA and Reprise Records’ THE SINATRA CHRISTMAS ALBUM. Taken in conjunction with Capitol’s A JOLLY CHRISTMAS WITH FRANK SINATRA, these three records represent an evolution of over three decades of holiday music, from the sacred to the almost profane. 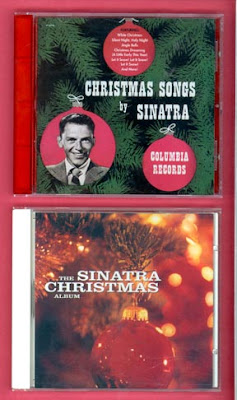 The Reprise disc contains songs recorded between 1963 and 1975, a period in which Sinatra suffered a rather steep decline in musical judgment and it shows here. The album starts off strong enough with a slightly weathered Frank crooning “Have Yourself a Merry Little Christmas” followed by “An Old Fashioned Christmas” with big city Frank pining for small town home. Two duets with Bing Crosby from 1964 hold up fairly well, even if their TV variety show provenance is obvious. But then, halfway through the album, we get three songs from A SINATRA FAMILY CHRISTMAS, a 1968 project featuring Sinatras Nancy, Tina and Frank Jr. “The Twelve Days of Christmas” is a hilarious (only somewhat intentionally) list of what gifts the kids will bestow upon the Chairman: Twelve hugs and kisses, eleven jars of jelly, ten silken hankies, nine games of Scrabble, eight pairs of cufflinks, seven books of fiction, six woolen nightshirts, five ivory combs, four meerschaum pipes, three golf clubs, two silken scarves... and a most lovely lavender tie. Hm.

Not only are the lyrics goofy, but the songs also shows that Tina missed out on Dad’s singing gene. the album wraps up with two Don Costa-arranged tunes, “A Baby Just Like You” and “Christmas Memories” which aren’t awful, but are hardly “fully realized performances of a singer at the top of his form,” as the liner notes state.

The Columbia CD (which replaces CHRISTMAS DREAMING in their catalogue) showcases the young Frank, the bobby sox idol, “Frraaaaankieeeee!” and it is this Frank which seems best suited to holiday fare. While the Capitol years represent Sinatra at his artistic peak, the warm, unseasoned voice of the Columbia Sinatra wraps around “White Christmas” like a big snuggle comforter on a cold winter night.

The arrangements (almost all by Axel Stordahl) are cozy and slightly melancholy, being that much of this music was recorded during World War II. The line “someday soon, we all will be together, if the fates allow” coming from the context of a country at war. In fact, some of Sinatra’s V-Disc recordings, which were sent to American troops overseas, are included in this collection.

And of course, there’s the inherent sound of recordings from this era. 1940’s vacuum tube recording equipment was unable to capture the high end or detail of music that later technology could (imagine trying to draw the thinnest line possible with a fat magic marker), creating that warm, fuzzy sound of old recordings which seems best suited to holiday songs.

Each of the Sinatra Christmas albums could serve as a metaphor for the changing nature of American Society. In the forties, America seemed much smaller, all pulling together with a common purpose, simple if not innocent. The fifties found the US swaggering around as the most enviable country in the world, cocksure and prosperous. But by the late sixties, a cynicism and rejection of so-called traditional values began to take hold, and America would never be the same. I’m not saying that’s good or bad, it just happened. And while our collective attention span becomes shorter and shorter, and the next big thing is passé before it’s even current, Christmas seems to bring a nostalgia for those seemingly simpler times.

We watch old movies we’ve seen dozens of times. We pull out the same old decorations, getting very upset if a cheap old piece of plastic happened to break in the box over the past eleven months. Tradition doesn’t seem like anachronism this time of year. For that reason, CHRISTMAS SONGS BY SINATRA works a bit better than the other two discs, although owning all three would certainly not be superfluous. After all, Sinatra at his cheesiest is still exponentially better than any Kenny G.