I know this puts me in the minority, but there are few things in life that give me as much joy as the time of year when summer gives way to fall. Granted, I spend most of my time inside regardless of the weather, and many of those hours are spent with the TV on, either as my primary activity or just buzzing in the background. There's a correlation between my love of the season and my love of television as well. So let's talk about fall and TV. But mostly fall.

One is IT’S THE GREAT PUMPKIN, CHARLIE BROWN

. I’ve already written about my deep love for A CHARLIE BROWN CHRISTMAS

, and GREAT PUMPKIN has a spot right next to it in my little pop-culture laden heart. 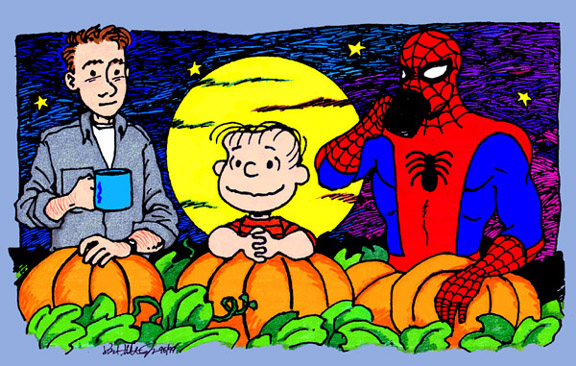 Specifically, I remember coming home after trick-or-treating, sorting through my bag o’ goodies (trying to keep Dad away from the good stuff) and watching GREAT PUMPKIN. Those incredible watercolored backgrounds evoke autumn so perfectly, I can swear I smell burning leaves when I watch it on video.

And, even after dozens of viewings, it is still funny. Sally’s final burst of rage at Linus over missing “tricks or treats” is a monologue tour-de-force that belongs on a shelf next to Alec Baldwin’s “put that coffee down” spiel from GLENGARRY GLEN ROSS

. “I could’ve had candy apples and gum! And cookies and money and all sorts of thing! But NO! I had to listen to you! You blockhead! YOU OWE ME RESTITUTION!”

As with the Christmas special, a lion’s share of the credit for accurately capturing the feel of the season goes to composer Vince Guaraldi. Much of Guaraldi’s Peanuts music is available on CD

, but this soundtrack is not available as it appears in the show. That is, the one crucial instrument that makes it so autumnal is missing: the flute. And the music accompanying Snoopy as the World War One flying ace makes his way across the French countryside after being shot down by the Red Baron isn’t available at all.

, GEORGE OF THE JUNGLE

, that scary woodcut looking LONE RANGER cartoon, and, top of the heap, SPIDER-MAN


SPIDER-MAN (or, SPIDERMAN as it was sometimes called) came on at 5:00, right when the sky outside my parents’ giant picture window in the living room was turning orange and the streetlights were coming on. The surreal sky outside sometimes perfectly enhanced the more bizarre Ralph Bakshi produced episodes of SPIDER-MAN featuring mole people and wacked out scientists who were bent on controlling the island of Manhattan.... and then.... THE WORLD!! These low-budget cartoons relied on much padding in the way of extended scenes of Spidey swinging through the city. Like GREAT PUMPKIN, SPIDER-MAN had amazing painted backgrounds, psychedelic watercolors that nature can only approximate in Autumn. Coupled with this was the swinginest cartoon score ever. The music is credited to Ray Ellis, but actually much of it was generic background music that was cheaply purchased for the show, because I’ve since heard it other places, most notably in a few house ads for Nick at Nite. But every time I hear that rock-jazz hybrid, I think of October evenings.

Now, you may be thinking, “If you were outside playing, you wouldn’t have had to see the sunset through a window, Cableboy!” True, but I didn’t stay inside all the time. I actually did have friends and did play outside. But the nice thing about tying something concrete to nostalgia is that you can be jolted back in time when you unexpectedly come across the stimulus again.

Years later, I shared an apartment with one of my best friends from college. It was in downtown Lancaster, right across from a graveyard. I found out that one Philly channel was running those old Spidey cartoons every morning at 7:00. Being more of a fanboy in those days, I set up the VCR every day to tape the show. One fall morning, I was awakened by the sound of the show in the living room. I must’ve left the TV volume up too high the night before or was sleeping lightly that morning because I usually slept through the show. Well, the sound of that score coupled with the early October morning briskness coming through the open window over my bed just transported me back to 1974 and suddenly for a moment, I was nine years old again. Now, that vivid flashback is over five years old, and it’s almost as strong to me as the one that preceded it.

Actually, I probably watch less TV in the fall than any other time of the year. That’s because this is the only season when I’d rather be outside than in. So, let’s take this opportunity to talk about autumn in general.

I love Fall. I get a bit ticked off when I hear people lamenting the end of summer, the most senses-deadening season of all. “Fall symbolizes death!” they proclaim, sad that they’ve got to put away the sandals until March.

No, Fall symbolizes ongoing change, something that is good. Even someone like myself (who doesn’t necessarily love nature) recognizes that it’s an ongoing cycle. Each season has its charms, and to me, autumn’s are the most poetic, the most visceral, the most awe-inspiring (and the most plentiful). Groups of trees that in spring and summer merge into one large mass of green suddenly become as vibrant and textured as a Matisse. Early morning frost crunches under your feet and chilly winds contrast with warm sunlight on your face. A shot of Bailey’s in a steaming cup of coffee tastes like the sound of kicking leaves out of your path as you walk downtown.

Autumn even has its own sound. Over the years, certain bands and artists have come to symbolize this time of year to me. With rock and roll, it usually has something to do with minor chords and a lush, echoing production. As soon as the temperature dips below 70, I break out the Everything But the Girl

The introspective, interpretive nature of jazz (both instrumental and vocal) can be compared to the changing colors of the leaves, the rapidly declining daylight hours, the crispness of the air. John Coltrane

all sound best in autumn. And whole albums by singers like Sarah Vaughan

, and of course, Frank Sinatra

could serve as soundtracks to these months. Don’t believe me? Listen to FRANK SINATRA SINGS FOR ONLY THE LONELY

or WHEN NO ONE CARES

at dusk with the window open and see if you don’t understand exactly what I mean.

are often referred to as he “autumn” records because they came near the end of her career, after drugs, alcohol and heartbreak had wreaked havoc on her voice. Critics who prioritize technical ability often dismiss Holiday’s later records for this reason. However, those who feel that emotion and honesty are far more important than precision value her later work as a powerful documentation of a tortured artist.

The key to appreciating autumn is, I believe, an affinity for subtlety and an inclination towards introspection. Most of contemporary popular culture is the furthest thing from subtle. Video Games, movies, sports, music and television are more in-your-face than ever. To a generation that’s become perpetually agitated by MTV paced fast cuts in every aspect of life, the genteel nature of this time of year can just seem dull. I think that’s sad.

Oh, well, let ‘em whine. Meanwhile, I’ll brew up a pot of joe, open the window and throw on ONLY THE LONELY. Eventually, I’ll even get around to checking out some of the new shows this season. Right after I pry myself out of that really sincere pumpkin patch.

ORIGINALLY PUBLISHED in 13 MAGAZINE, October 1995. Edited for the Archive.
Posted by Pops Gustav at 5:48 PM