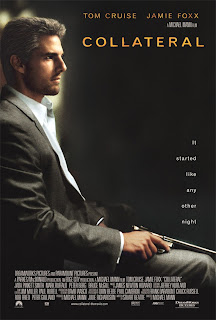 ,” Tom Cruise, with dyed gray hair and a tailored suit, plays Vincent, a contract killer who seems to have nothing in common with the breed of high fiving, Ray-Ban sporting dudes and square jawed heroes that Cruise defined over the past two decades. But he’s certainly not the first Hollywood good guy to go bad (at least onscreen).

In the 1930s and 40s, Mickey Rooney was a beloved child / teen star, known mostly for roundin’ up the kids (including Judy Garland) and puttin’ on a show in the Andy Hardy movies. Clean cut and fresh scrubbed to the point of being chafed, few actors had a more wholesome image. So when Rooney strapped on the gat in 1957’s “Baby Face Nelson,” some were startled. As the wee mobster, Mickey seems to be working out some demons as he machine-guns anyone who gets in his way.

” took one of cinema’s quintessential nice guys and turned that smile upside down. Best known as Tom Joad, the epitome of moral rectitude from “The Grapes of Wrath

,” Henry Fonda here plays Frank, a sadistic killer who has no qualms about gunning down an entire family, right down to the angelic little boy. Presumably the scene where he shoots grandma and the family dog hit the cutting room floor.

By the 1990s audiences were a tad more sophisticated, but that didn’t stop a small furor from erupting over 1993’s “The Good Son

,” which cast Macaulay Culkin in a remake of “The Bad Seed

.” Just three years after he slapped on the after shave in “Home Alone

,” Culkin plays Henry, a 12 year old psychopath whose evil ways are only seen by his cousin Mark, played by a pre-Hobbit Elijah Wood. You’d think Wood would have been more wary of Smeagol after dealing with the cherry-lipped killer in this predictable thriller (which also ends with some cliff dangling). Come to think of it, Culkin might’ve made an effective elf in “the Lord of the Rings

” has now attained classic status, it’s easy to forget that many eyebrows were raised at the notion of simple but good-hearted Vinnie Barbarino

being cast as a hit man. But Quentin Tarantino’s vision saw John Travolta as perfect for the role of Vince Vega, the heroin-shooting anti-hero in the 1994 film. Suddenly, shooting and swearing in a cult hit seemed a sure way to resurrect a career and/or be taken seriously.

.” Granted, this professional hit man was still mostly a good person (as with most hit men in movies, it’s “just a job”) whose conflict over his profession drove him to therapy. Plus, this movie was a comedy, but part of the black humor came from the bizarre notion of seeing “Say Anything

”’s Lloyd Dobler earn a living by whacking people (and not by use of kickboxing, the sport of the future).

While he may not immediately conjure the image of nice guy, Keanu Reeves doesn’t spring to mind as the perfect choice to play a murderer. Which is one reason (aside from his acting ability) why his turn in 2000’s “the Watcher

” or humanity’s salvation in any of the “Matrix

It’s far easier to wrap your brain around the concept of Robin Williams as a disturbed sociopath, something he played back to back in 2002’s “Insomnia

” and “One Hour Photo

.” Despite a career comprised mostly of warm and fuzzies like “Mork & Mindy

,” “What Dreams May Come

,” and “Good Will Hunting

,” Williams always comes across as someone who’s about to snap and it’s surprising that it took so long for him to be cast in the bad guy role. Still, much was made about him playing against type in both of these thrillers despite the fact that Williams was once a mime.

To many people, Tom Hanks is the current day heir apparent to Henry Fonda’s likable everyman. Despite a long celebrated career (starting with a hard to top run as Buffy on TV’s “Bosom Buddies

” that Hanks played a killer. Naturally, the role of Mike Sullivan isn’t so much evil as another of those villains with a heart of gold that only exist in fiction. In the end, as with so many Hanks films, the audience is reaching for the hankies (sorry) as nobility swells even in the heart of a hit man.

Of course, none of these roles permanently altered the public’s perception of any of these actors, and it’s unlikely that from here on, Tom Cruise will be thought of as “that guy who played the gray haired killer.” Still, it’s always nice to see an actor stretch his legs and try on a different pair of pants... even if they don’t always fit.