From Commies to Corporations 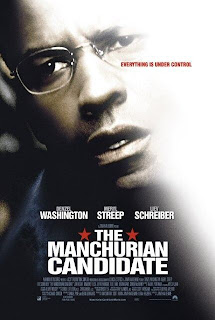 Multiplexes have been clogged for years with remakes of classic (or at least old) films. They’re usually either superfluous (GET CARTER

) or just pointless product (PLANET OF THE APES

)... and sometimes all three (PSYCHO

But Jonathan Demme’s update of THE MANCHURIAN CANDIDATE

is none of those. Tense, thrilling and relevant, this is how remakes should be done. Demme and screenwriters Daniel Pyne and Dean Georgaris have taken John Frankenheimer’s 1962 movie, kept the same structure, characters and major plot points and successfully made it relevant to 2004. It’s a major accomplishment, and one that you can appreciate even more if you see the original.

Based on the 1959 novel by Richard Condon, the original MANCHURIAN CANDIDATE

might dispute that). Since the book dealt with themes such as communism, McCarthyism, incest, unscrupulous politicians and assassination, many thought it was too controversial to be put to film. Then two of the Sixties’ biggest swingers stepped in to shepherd the movie. President John F. Kennedy expressed his admiration for the book and then his pal Frank Sinatra signed to play Ben Marco. The film was a go.

Set during the cold war, THE MANCHURIAN CANDIDATE centers on Staff Sergeant Raymond Shaw (Laurence Harvey), a Korean War hero decorated with the Medal of Honor for rescuing his patrol of nine soldiers, taking out a full company of enemy infantry and leading his patrol, which had been MIA for three days out of enemy territory and back to safety. Or so everyone thinks.

In fact, Shaw and his men had been captured by the Soviets and Red Chinese and taken to Manchuria, where they were brainwashed and sent back the states to carry out an intricate plot to gain access to the highest power in the land.

But the brain is a powerful organ, and members of the patrol, including Major Ben Marco are plagued with the same nightmare, a recurring dream that mixes the reality of what happened with the planted lie. As in the remake, Marco becomes obsessed with trying to unravel the truth.

Frankenheimer’s film is heavy on dialogue and light on action (one exception being a brutal karate fight between Sinatra and Henry Silva... the first karate fight in an American movie). Long monologues from many characters create a powerful psychological tension. There’s only one scene in the new movie that reuses any of that dialogue, and it’s where Ben meets Rosie (Kimberly Elise) on the train to New York. The new film wisely alters the raison d’etre of Rosie’s character. In the original, Rosie (Janet Leigh) falls in love at first sight with Marco, but WHY is a mystery; He’s a sweating, shaking bundle of nerves, unable to light a cigarette or complete a sentence. Yet Rosie dumps her fiancee for Marco within 12 hours of meeting him. Ah, that Sinatra power over women.... 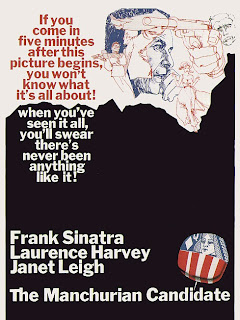 The original's love story is all but expunged from the remake. In the '62 version, Shaw’s relationship with Jocelyn Jordan and her father, Senator Tom Jordan serves to humanize Shaw and makes his ultimate fate that much more tragic. In the remake, Jocie is very much a part of Shaw’s past, leaving him utterly alone in the world... well, except for his mother.

While Meryl Streep is effective in the new film as the manipulative Senator Eleanor Shaw, she doesn’t come close to the portrait of evil that Angela Lansbury painted in the original. 1962 being 1962, Lansbury didn’t portray a Senator herself, but rather the wife of (and real power behind) puppet Senator John Iselin (a character eliminated in the remake). Those who only know Lansbury as the kindly sleuth Jessica Fletcher from MURDER, SHE WROTE

will be stunned by her dark turn as a mother who loves her son.... too much... but at the same time not nearly enough. Lansbury’s effective performance is even more amazing when you consider that, at age 37, she was just a few years older than Laurence Harvey... who played her son.

The political and social landscape has changed a lot in the past 42 years and some of the more dated elements of the original MANCHURIAN CANDIDATE have been smartly modernized in the new movie. The brainwashing plot is far more complicated (and makes more sense) in Demme’s film. The climax of the original, set at the Republican National Convention, relies on lax security that not only seems ridiculous by today’s standards (especially with what we just saw in Boston and what’s coming in New York), but seems to preclude the whole need for a scheme so complex.

Of course, the biggest change in the movies is the Enemy: Communism as a looming threat has been replaced with (depending on your political leaning) either terrorism or the ever-widening net of global corporatization and its hold on our leaders. It’s not giving anything away to say that “Manchurian” in this movie refers not to the country, but to “Manchurian Global,” a corporation that, were it real, would no doubt have figured prominently in FAHRENHEIT 9/11

. I guess the more things change, the more they stay the same, because charges of anti-Americanism (or at least anti-capitalism, which some would say is synonymous) have been leveled against Demme’s film in much the same way they were at Frankenheimer’s.