Here’s a trio of advertisements from old comic books. I love all of these ads, but for different reasons. Let’s tackle the Live Monkey first. 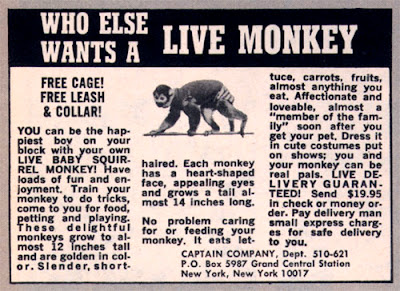 WHO ELSE WANTS A LIVE MONKEY?

Well, who the hell doesn’t want a live monkey? This ad is from a Warren Publications magazine from the late 1960s and I can only imagine the pandemonium that it caused in homes with gullible parents. Yes, it’s “affectionate and lovable, almost a ‘member of the family’”... especially if your family contains pervy Uncle Harv who likes to masturbate a lot and then throw the ejaculate at you. Yeah, I once spoke to someone who knew someone (Urban Legend? Perhaps) who had one of these monkeys, and the animal became known as “Spunky” because of this delightful habit. No doubt there were also monkeys who earned the moniker of “Poopy” as well.

I also love the “LIVE DELIVERY GUARANTEED” line... no doubt added after a handful of dead squirrel monkeys landed on doorsteps, traumatizing some excited youngsters (only boys, apparently) awaiting their “real pal.”

I don’t know if Captain Company is still around or not. If they are, maybe some of those unsold monkeys have been able to move into at least middle management. Let’s hope so. 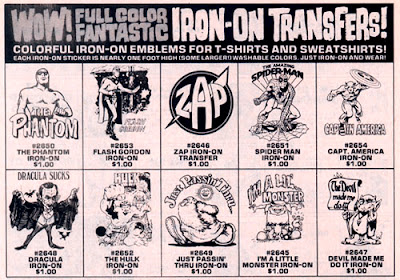 WOW! FULL COLOR FANTASTIC IRON-ON TRANSFERS!
Few things take me back to memories of childhood summers more than images of old iron-on T-shirts. Roach Studios (a name that I thought referred only to the bug when I was a naive lad) was the undisputed king of the transfers, and I, like every other kid raised in the Seventies, added much to their coffers. Summer vacations at Rehoboth / Dewey Beach in Delaware always included stops in practically every T-shirt shop on the boardwalk (and they were legion). My eyes would scan the hundreds of designs until I found the superhero decals and then the pleading would begin. Of the iron-ons in this ad, I only owned the Captain America shirt (which used fluorescent pink in the place of red, giving Cap a slightly less authoritative, but much groovier look), but I vividly remember seeing almost every one of these hanging on those shop walls.

Them there new-fangled screen-printed T-shirts the kids wear these days may look “better” and last longer, but they’re not the same. Buying a T-shirt today is just another consumer action. In the Iron-On days, there was an almost creative excitement in picking your image and then selecting what style and color shirt would serve as the frame. I can still remember the olfactory jolt as the stoned employee pressed the iron-on, the anticipation as they let it cool and peeled the backing paper and the warm, slightly sticky feel of the fresh garment. More than a garment, really: for a ten year old, this was a rare opportunity to select your own clothes, to express your personality... even if your personality was (is) giant geek! 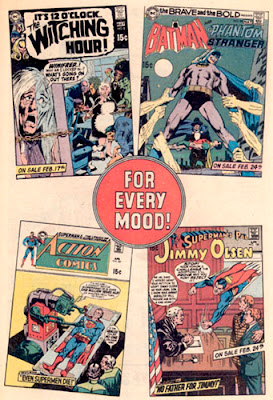 FOR EVERY MOOD!
For comic book fans up through the Eighties, full page house ads of upcoming comics were mouth watering teasers. Many years later, seeing one of these old ads picturing sometimes twenty or so comics is a quick nostalgia fix. We fanboys remember which comics we owned (or still do), wonder why we didn’t buy others, even remember which drugstore spinning rack held our choices (Thrift Drug, Rea & Derrick and Pensupreme were my three main drug dealers in those pre-comic shop days).

This DC Comics house ad (featuring art by two legends, Neal Adams on top and Curt Swan below) has particular resonance for me because it was in the very first comic book I ever owned: SUPERBOY #164, cover dated April 1970 (which means it came out a few months earlier than that... don’t ask). I was five years old and my father brought it home for me because I loved the Filmation Superman cartoon. He had no idea what kinda Pandora’s Box he had just opened.

The subsequent trip to the drug store yielded the bottom two books and a handful of others(years later I picked up the top two as back issues). But all the DC (or National Periodical Publications, as it was known back then) books that came out that month, even the ones that I only know from the covers pictured in house ads hold such powerful resonance to me. I have those first books in a separate place of honor on my comics shelf, symbolically and literally the first books in my collection.

In the 34 years since, I bought tens of thousands of comic books. I’ve also gotten rid of tens of thousands, and these days I’m selling far more than I’m buying. But even if it ever gets to the point where I only own a handful of comic books, the last ones I’ll ever get rid of are the first ones I owned. They’re not the best comics ever produced, but they do mean the most.