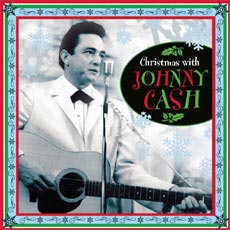 There may be no genre of music harder to review than Christmas music. A critic is forced to look at each record as objectively as possible, to get into the mindset of the intended audience and judge the music on its own relative merits (how else can one explain positive reviews for the new Vanessa Carlton CD?). I've long held that if a person didn't grow up hearing holiday music, they don’t like it as an adult. Christmas music, like fruitcake and church, is not a part of everyone's holiday traditions.

As I writer, I've never managed to master that analytical objectivity. It's a failing. Don't ask me to review the new Brian Wilson record (it won't be positive). However, I happen to love Christmas music (honest). I also love Johnny Cash. So, it would seem that Christmas With Johnny Cash

, a compilation of 12 Columbia Records holiday tracks spanning 1963–1980 would garner a rave. But not quite.

This CD is mostly sacred with a secular tidbit or two and a few of Cash's spoken word tales of faith and hope mixed in. It's a spotty collection that will make all but the most ardent Cash fans hit the "skip" button at least a few times.

Much of Johnny Cash's catalogue deals with the Lord, so you wouldn't think a Christmas album would be much of a leap. But for some reason, hearing that rumbly baritone (one of the four or five most distinctive voices in the history of recorded music) singing "Hark the Herald Angels Sing" just doesn't quite jibe. It's like Sinatra singing "You Are the Sunshine of My Life". Regardless of how great the singer is, there are some songs that just don’t sound right coming outta their pipes. More secular pieces like "Blue Christmas" and Cash originals such as "The Gifts They Gave" fare much better.

One major problem with this disc is that the non-chronological sequencing is jarring. Tracks from Cash's 1963 album The Christmas Spirit

, with their simple orchestration and reserved production, clash with songs from 1980's schmaltzy, overproduced Classic Christmas

. A few pieces from 1972's The Johnny Cash Family Christmas nestle creatively somewhere between those two extremes, but they hardly cushion the shock.

In addition, why is this compilation so short? 12 songs clock in at just under 36 minutes, hardly the breadth you’d expect from Sony Legacy for a collection of one of its most legendary artists. And as far as previously unreleased material, there's only one cut—"Christmas As I Knew It", a rehearsal from a 1970 episode of "The Johnny Cash Show

". It’s a spoken word reminiscence about Cash's destitute yet rich Christmases of his youth that's enhanced by a telephone ringing in the background.

Granted, this is a 'Nice Price' comp that's not geared at the hardcore Johnny Cash fan, more towards the casual Christmas CD shopper. And for them, it's fine (there's that objectivity trying to squeeze its way in). But this Cash fan would be much happier with a proper reissue of The Christmas Spirit with original art and maybe a few bonus tracks in there.