Pity Parties for the Rich and Famous 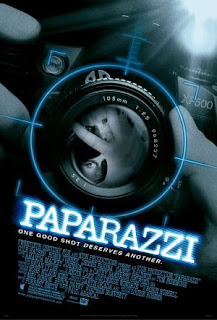 seems on the surface to be directed towards a very select audience: It’s a revenge fantasy for the super famous. Okay, so the poor action star who’s stalked by the paparazzi in the film actually has his wife and child injured as a result, but how many of us poor normal schlubs can really muster a lot of sympathy for someone so famous that their worst problem is people taking too many pictures of them while they’re in the parking lot of Target?

We live in a society that places an inordinate amount of importance on its popular culture (and yes, we are the proverbial kettle labeling pot) and our celebrities are our royalty, be they actors, musicians or athletes. Fame is the ultimate aspiration, and the presumption of proverbial peaches and cream has been challenged onscreen many times.

slyly poked fun at the lads’ newfound godhood. Aside from shots of screaming British lassies chasing them through the streets, the movie has lots of clever bits that show the band using their trademark wit to deal with people who both loved and loathed them for being the bigger than, well, you know.

One of the things that made the Beatles so popular was how their incredible fame didn’t seem to change the Liverpudlians. Stardom, particularly of a sudden nature is a difficult adjustment. In Elia Kazan’s A FACE IN THE CROWD

(1957), Andy Griffith plays Lonesome Rhodes, an Arkansas hobo / country singer who is discovered by a radio producer and becomes an overnight sensation. Rhodes’ ego inflates faster than Otis the town drunk’s belly after Aunt Bea visits the jailhouse with a basket of chicken (wow, that was a metaphoric stretch) and he becomes corrupted by his “power.” Stepping on everyone in his way, aspiring to political office, Rhodes is eventually taken down by his own arrogance when he inadvertently refers to his public as “stupid idiots” on the air.

is more about personal identity than celebrity. But the glimpses into the somewhat mundane isolation of Malkovich’s life contrasted with the lengths to which people go to
”live it” certainly seems to be an indictment of the public’s obsession with movie stars.

That obsession has degrees, of course, from the simple casual aficionado to the website hosting sycophants. It’s the obsessive ones who usually become the subjects of fiction. Whitney Houston in THE BODYGUARD

(a different one), the dependably disturbing Robert DeNiro plays a man whose entire life takes second place to his fixation with baseball player Wesley Snipes. While the movie is rather pedestrian, it does contain some harsh, powerful scenes of DeNiro placing his job and his son in jeopardy due to his obsession.

Still, it’s difficult for the average American to feel sympathy for the so-called plights of the rich and famous, despite attempts to elicit at least some understanding. In NOTTING HILL

, Julia Roberts is the most famous actress in the world (quite a stretch) and she quite unbelievably falls in love with a common bookstore owner played by Hugh Grant. Can Hugh adjust to life under the microscope and can Julia really be with a normal everyday Joe? Given the cast, what do you think? Sappy Happy Ending follows and we’re left with a very glazed glimpse of how the rich and famous really live.

Of course, fame is relative. The biggest star in any given subculture may not be a household name, but can still lose perspective. In 1997’s BOOGIE NIGHTS

Actually, it was, but not in that movie. Wahlberg went on to play the titular ROCK STAR

It’s rare that a Hollywood product can believably dull the luster of fame, but HBO’s THE LARRY SANDERS SHOW

did so consistently and hilariously. As the supremely insecure, narcissistic and ultimately unhappy host of a late night talk show, Garry Shandling created a self-deprecating microcosm of the insular world of showbiz that was so good it managed to score dozens of cameos by real celebrities anxious to make themselves look bad (which, of course, made them look good).

But maybe the single best take on the lure and cost of fame is Martin Scorsese’s 1983 ebony, inky, pitch-dark deep black comedy THE KING OF COMEDY

. Robert DeNiro plays Rupert Pupkin, an autograph collecting wannabe stand up comic who projects a quick interaction with a Johnny Carson surrogate into an actual relationship. When reality crashes in, Pupkin teams with another obsessed fan (Sandra Bernhard) to enact a scheme that ensures instant fame. Jerry Lewis’ embodiment of talk show host Jerry Langford is simultaneously pitiable and enviable and the genius of the film is that there’s absolutely nobody to root for.

At this point, we need to exercise every bit of restraint to be the only article about fame to not mention Andy Warhol’s overused quote about its shelf life. But let’s look at what happens on the sixteenth minute.

The story of the tenuous nature of fame is so eternal that A STAR IS BORN has been made three times. In each version (1937

), a showbiz couple deals with disaster because one person’s star is on the rise while the other’s is in decline.

remains a powerful glimpse of faded Hollywood glory. Gloria Swanson plays Norma Desmond, an aged castoff from the silent film era who still resides in a clouded delusion of stardom, believing that her comeback is just a good script away. The harsh realization that her car is in greater demand than she signals a descent into tragic madness.

But Norma seems normal compared to the supremely creepy Bette Davis in 1962’s WHATEVER HAPPENED TO BABY JANE?

In this camp staple, Davis plays “Baby Jane” Hudson, a former child star whose jealousy of her sister Blanche’s subsequent Hollywood success drives her to acts of criminal and crippling sadism. Even after Blanche’s career is cut short by a car accident that puts her in a wheelchair, she’s still more famous than Jane, and this is a family without sibling pride.

have tried to deal with faded glory, they pale in comparison to television glimpses of the real thing. While most of the casts of THE SURREAL LIFE seem to be aware that they’re on a downward career slope (Corey Feldman aside), their willingness to appear on the deprecating reality show reveals a sad reluctance to let go of the brass ring.

But at least those D-listers were once almost famous. With reality television creating more and more instant, yet instantly disposable quasi-celebrities, fame continues to be a powerful lure. But maybe the ease with which it can now be attained will neuter its power. Maybe someday starring in a TV show will be no more glamorous than driving a jackhammer. Heck, maybe George Clooney will be able to buy toilet paper without having to slug someone.