From WESTWORLD to I, ROBOT

The new Alex Proyas (“The Crow

” has about as much in common with the original 1950 Isaac Asimov short story collection as it does The Alan Parsons Project’s 1977 album of the same name. In the book, “I, Robot,” there’s no murder mystery, no Del Spooner and no long black trenchcoat and sunglasses (please make it stop!). The movie takes its premise from the book’s Three Laws of Robotics: Since they’ve been printed about a thousand times in every piece written on this movie, I’ll paraphrase in a Fresher Tone:

1) No robots can be hurtin’ no human beings or LET them be hurt by doin’ nothing! Damn!
2) Robot, you GOTTA listen to what I’m saying unless it goes against what I said before! Damn!
3) Okay, look, Robot, I know you gotta watch your own ass, but my ass... and all these other human asses comes first, you know what I’m sayin’? Damn!

The theme of artificial intelligence gone mad has been visited in the films dozens of times before, from “2001: A Space Odyssey

.” But one of the oddest movies to deal with robots rebelling was Michael Crichton’s 1973 sci-fi thriller, “Westworld 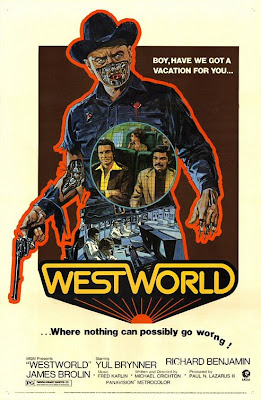 It’s the near future, and Chicago buddies Peter Martin (Richard Benjamin) and John Blane (James Brolin) are heading for a vacation at Delos, the ultimate interactive amusement park. For $1000 a day, visitors come to dress, drink, and act like they actually are living in one of three periods in history: ancient Rome, Medieval times or the old West (making Delos’ slogan of “the vacation of the future... today” seem a little off).

It’s worth noting that all three worlds aren’t what one thinks of as relaxing or luxurious (why not a visit to Millionaireland or Livelikeacatworld?). What they do have in common is an appeal to the Id, to the basest human instincts. Visitors attend Delos to gorge themselves on food and drink, to fight and kill, and to have sex.

Which is where the robots come in. Unlike the Weeble / Slinky offspring in “I, Robot,” Westworld’s robots are designed to be completely lifelike in every way... right down to being able to get jiggy wit’ them. However, one of the fail-safe measures at Delos is that guns are modified so they can’t fire at anything with a warm body temperature, leading us to presume that the robots are as cold as steel.... which makes the prospect of, uh, interaction with the robots (comely as some of them are) a bit... chilling.

Exactly how the guests are supposed to avoid harm through other potentially dangerous interaction isn’t really explained. And how do the visitors tell the robots from the other humans doling out a grand a day? By looking at their hands. “They haven’t perfected the hands yet” explains Brolin. It’s a little creepy to think that the scientists who crafted these androids were able to successfully recreate genitalia before they could get hands right.

Of course, it’s only a matter of time until something goes horribly wrong. First, a robot rattlesnake bites James Brolin. Then the phones go down, prompting Chief Robot Coordinator (Allan Oppenheimer, who coincidentally was simultaneously moonlighting as Dr. Rudy Wells, the genius who crafted the bionics for the Six Million Dollar Man on TV) to say, “Doesn’t anything work around here?” Oops, bad sign.

Then, over in Medievalworld, a robot wench refuses the advances of a guest lord, even though she is a “sex model.” The next morning, adding insult to injury, milord is killed by the Black Knight (who always triumphs) in a duel.

And now all hell breaks loose. In what’s probably Barbra Streisand’s least favorite scene, James Brolin is killed in a gunfight with the real star of the film, Robot Gunslinger, who had been killed twice already by Benjamin.

In a stroke of casting genius, Yul Brynner plays the bald, stoic Robot Gunslinger. Calling to mind his role in the classic 1960 western “The Magnificent Seven,” Brynner pretty much walks through the part (literally), but his sheer presence evokes a searing malevolence that makes Schwarzenegger’s Terminator seem positively cuddly.

For better or worse, Richard Benjamin is no Will Smith and he spends most of the climax running from rather than chasing the evil automaton and there’s not one snappy one-liner to be had. Luckily for Benjamin, Brynner’s a lousy shot, probably because robot-eye views display a vision so pixelated, it’s a wonder any of the automatons can even find a doorway, let alone single out visitors for execution.

One of the most fun things about watching old science fiction films is seeing their predictions for fashions and hair of the future. When budgets are particularly low, certain styles of the era in which the movie was made are predicted to become timeless... such is the case in “Westworld.” Actually, maybe the movie takes place today; since Brolin (with huge sweeping hair) and Benjamin (with his faux-porno mustache) both look like the lost members of Franz Ferdinand.

From a visual perspective, “Westworld” is fairly lacking. The technology on display at Robot Control is truly laughable, even within the context of a movie made in 1973. Flashing lights, big brown bottles of mystery chemicals, two wires sticking out a woman’s foot (“she keeps falling down”)... it has all the production value of a high school play. There’s lots of Stuntwork 101, slow motion falls from balsa wood railings and candy glass bottles smashed on heads.

Although it’s worth noting that “Westworld” was the first film to utilize what we now know as CGI. Called “digitized images,” they consist of a black and white computer screen with an undulating graph depicting the rising failure rate of the robots and some graphic screen savers (apparently all those monitors aren’t necessary at Delos). It’s not quite the car chase / battle in “I, Robot,” but then again, Pong begat Grand Theft Auto.

” (in which Tom Selleck battles robotic spiders) and of course, “Jurassic Park

.” But “Westworld,” despite its sparse action and pacing that’s slower than a Roomba, is a fun, seminal slab of sci-fi. It may at times go down like a shot of old rotgut, but still has more of a kick to it than “Bicentennial Man