It's Run by a Big Eastern Syndicate, You Know (an Appreciation of A CHARLIE BROWN CHRISTMAS)

It’s not easy being a cynic. People tend to think that cynics reject the mainstream out of some callow desire to be rebellious and hip. Negative opinions on some popular piece of culture are inevitably greeted with “Oh, you hate everything!” While it’s undeniable that many people cop attitudes with little or no reasoning behind them simply because “everything sucks,” TRUE cynics spend years developing a set of uncompromising standards with which to judge everything from politics to the arts, and we’ve come to the following conclusion: Everything sucks.

Well, okay, not everything, but probably ninety percent of any given category: Rock bands, movies, plays, books, local newscasters, et al. But when the exception to the rule, that rare slice of creative perfection comes along, we’ll happily admit it and praise it like the second coming.

One such exception came along on December 9th, 1965: Charles Schulz’ A CHARLIE BROWN CHRISTMAS

. Now, in order to embrace A CHARLIE BROWN CHRISTMAS, you must have at least some affinity for three things: 1) Cartoons. 2)The plight of the underdog. And, 3) Christmas. That is, the concept of Christmas as a special time of the year, when (ideally) people at least temporarily put their narcissism on hold and take time to consider and care for others as well as appreciate the truly important things in life. Radical, I know.

The term “classic” has been rendered mostly impotent, thanks in no small part to the Walt -ugh- Disney Company (which slaps the oxymoronic tag “brand new classic” on every piece of product they shove down the pike). But something really only becomes a classic with time, time combined with the seeming lack of it. True classics are those creative works that (aside from technological or societal anachronisms) feel as true at heart as they did when they premiered. The characters are fully developed, the situations believable (within context), the conflict something we can at least understand, if not empathize with. Movies like IT’S A WONDERFUL LIFE

and MARY TYLER MOORE. And A CHARLIE BROWN CHRISTMAS. 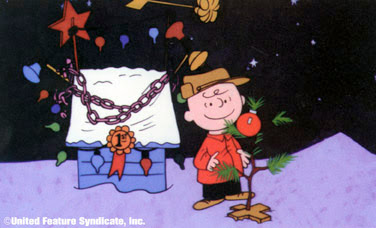 To see it today, 37 years after its premiere, it’s hard to believe the show’s contemporaries were such dated time capsules as BATMAN, BEWITCHED

and THE BEVERLY HILLBILLIES

. Lines like, “Gee, do they still make wooden Christmas trees?” and “Find the true meaning of Christmas: Win Money, Money, Money!” could have been written today (if writers of contemporary children’s shows didn’t patronize their audience so much).

The spectre of commercialism has hung over Christmas since the first Myrrh-R-Us franchise opened, but Charles Schulz tackled it with heart and wit rather than righteous indignation. So it’s ironic that A CHARLIE BROWN CHRISTMAS was not spawned by a desire to create a great holiday story. Rather, it was somewhat cynically concocted by producer Lee Mendelson when the Coca Cola company refused to sponsor a documentary on Schulz, but asked if there was a Peanuts Christmas show they could take a look at. There wasn’t, but Mendelson assured Coke that there was. Over the weekend, Schulz wrote what would become A CHARLIE BROWN CHRISTMAS. Coke bought the show off of a telegram synopsis. But the rest of the genesis wasn’t that simple. Schulz had to fight to maintain what he felt were the key elements of the story, and he stood firm on how he felt the show should be done.

Today, it’s easy to take for granted many of the innovative aspects of A CHARLIE BROWN CHRISTMAS. But in 1965, Schulz was considered a troublemaker for not allowing a laugh track on the cartoon and for demanding that actual children be used to voice the Peanuts gang. On top of that, only two of the children were professional actors; The rest were just neighborhood kids. And since most of them were too young to read (especially words like ailurophasia and hypengyophobia), co-producer Bill Melendez had to feed the actors the lines, sometimes one syllable at a time (which accounts for the sometimes broken sound of some of the dialogue). Schulz also contracted jazz pianist Vince Guaraldi to write completely atypical cartoon music for the score.

Charles Schulz won all his battles, but when CBS executives first saw the show, they hated it. They thought it was boring. Still, the show aired.... and was the second highest rated program that week (BONANZA was #1). The next year, it won the Emmy for best animated special. As time has shown, the suits were wrong (as usual). It’s nearly impossible to imagine canned laughter behind an adult voice saying, “Dear Santa Claus.... make it easy on yourself. Just send money. How about tens and twenties?”

And as for the music.... ahhh, the MUSIC

. In the sometimes stuffy annals of jazz, the Vince Guaraldi Trio is usually a footnote, casually dismissed as pop fluff. But to sell Guaraldi’s Peanuts music short is blind elitism of the worst sort. He managed to successfully translate the subtle sarcasm and unchildlike intuitiveness of the Peanuts characters into music that, like the comic strip, was transcendent. While the music on its own is wonderful, as a part of the whole, it becomes magical. Guaraldi’s piano and drummer Colin Bailey’s brushed snare perfectly evoke the falling snow against a dark blue background as Charlie Brown and Linus desperately search for the right Christmas tree.

For many of us under-40 types, this was the first jazz we liked, long before we were open minded enough to check out Miles Davis or Thelonious Monk. And while nostalgia is a powerful force, not too many of us still actively listen to “Bert’s Blockbusters.” But Guaraldi’s Peanuts music continues to sell, and contemporary musicians are still releasing their own (usually awful, overproduced) versions.

But ignoring all the technical innovations and artistic merit for a moment, the key factor for A CHARLIE BROWN CHRISTMAS’ success is its heart (and please refer to the list of prerequisites before continuing to read this column).

Now, I’m not the Christian that Charles Schulz was, but I’m also not going to scoff at the centerpiece of the show: Linus’ reading of Luke 2:1-20 (aka “The Christmas Story”). Some years back, when it was my turn to read said passage at the Heitmueller family Xmas eve gathering, I read it with the exact phrasing of Linus, much to the amusement of my brother (who was the only person in the room who got the joke). I’m one of those people who has extrapolated the whole “birth of Christ” celebration into the larger (in my eyes) idea of “Peace on Earth, good will towards men.” And THAT, ultimately, is the message of A CHARLIE BROWN CHRISTMAS.

The show educes strong emotions, profound feelings that don’t normally get stirred up by a tee vee show. Much has been written about Charlie Brown as Outsider, and I think a lot of kids who were outsiders felt a kinship with the character even before they (okay, WE) realized we were in for a lifetime of ostracism. Charlie Brown is a “loser” primarily because he refuses to abandon his aspirations or compromise his principles. He’ll never give up trying to kick that football, fly that kite or win that baseball game. And he’ll never, ever buy an aluminum Christmas tree. Defeat and humiliation often come in large doses, but every once in a blue moon, the outsider who goes against the mainstream and holds to his belief wins in the end, and it is a sweet victory indeed. When the gang admits that Charlie Brown (while still being a blockhead) DID get a nice tree, it’s a glint of hope for the underdog.

So, while the rest of the year I steadfastly avoid anything that smells of “feelgood”, once December rolls around, I gear up to watch something I’ve seen dozens of times, that I know by heart, but that still chokes me up almost every time. To many people, that’s an admission that brings derision, which I guess puts me in the company of Charlie Brown. And that’s fine with me.