Satan Has a Hell of an IMDB database! 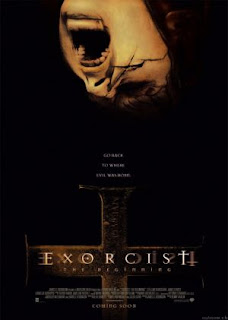 In EXORCIST: THE BEGINNING

, we witness a young Father Merrin first encountering the demon Pazuzu many years before the priest would try to chase the li’l devil out of darling carpet peeing Regan McNeil in 1973’s classic THE EXORCIST

. That particular incarnation of Satan may be cinema’s most indelible, but the devil’s been a character in film since the very beginning.

Thomas Edison was decried as the devil incarnate because of his “magical“ inventions by some extreme Christians in the late 1800s, perhaps inspiring his 1908 two-reeler, THE DEVIL and 1909’s likewise titled film. The second DEVIL was an adaptation of a stage play that introduced the concept of Satan on Earth as a well-dressed man of the world.

In an era where footage of a train pulling into a station or a cowboy firing right at the camera was enough to scare audiences into fainting spells, it’s no surprise that Satan was a recurring motif in early cinema. In numerous US and foreign films (many of which were also simply titled THE DEVIL), Mephistopheles tempted, tortured and terrified mortal souls. The 1908 French one-reeler SATAN’S SMITHY finds the devil defeated by a fairy who rescues a blacksmith from Hell. Talk about a movie begging for a Shyamalan remake!

Few tales of the devil have been reinterpreted more than the legend of Faust. Reducing Goethe’s complex stage play about the supposed 16th century necromancer to “guy sells his soul to Satan to get stuff,” this story has been pitched in Hollywood more than “teenager tries to lose his virginity.”

In the 1958 adaptation of the Broadway hit, DAMN YANKEES

Ray (My Favorite Martian) Walston played Mr. Applegate (aka you-know-who) who makes a deal with Washington Senators (that used to be a ball team, kids) fan Joe Boyd, allowing him to become the greatest ball player ever. Insert your own joke about what current ball player’s name has been written over Boyd’s here.

In 1984, George Burns got double billing in the half-punctuated OH, GOD! YOU DEVIL

playing both the Big Guy Upstairs and Satan (here called Harry O. Tophat). In this film, the Risen and the Fallen battle it out over the soul of a rock star played by... Ted Wass... yes, Blossom’s dad. This movie makes you pine for the rebellious rock & roll spirit embodied by John Denver in the first OH, GOD!

The thing about making a deal with the devil is, you don’t wanna welch. If you need proof, check out 1987’s ANGEL HEART

. In this chicken blood-drenched movie, Louis Cyphre (get it?), played to the hilt by a bearded, long-fingernailed Robert DeNiro, hires detective Harry Angel to track down singer Johnny Favorite. Seems Johnny has split New York for New Orleans with “something” that belongs to Cyphre. I won’t ruin the ending by telling you what it is, but it rhymes with “sole.” 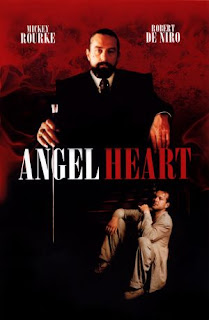 of that movie starring Elizabeth Hurley as a sexy clubbin’ devil, and Mickey Rooney’s turn in an episode of the 1977 Paul Shaffer / Greg Evigan sitcom “Year at the Top”, yet another Rock & Roll Faust tale.

El Diablo’s been played for laughs as much as for screams. In 1981, Bill Cosby starred in THE DEVIL AND MAX DEVLIN

as Barney Satin (again, get it?). When Elliott Gould mistakenly winds up in Hell after dying in a car crash, Cosby offers to send him back to Earth if he can convince three people to sell their souls and hilarity ensues! Or not.

Using one of his patented annoying yet unfunny voices, Adam Sandler played a son of the devil (Harvey Keitel) in 2000’s LITTLE NICKY

. Depicting Hell as a family business with generations of evil and semi-evil overlords, this movie also features Rodney Dangerfield as Lucifer (Nicky’s Grandpa), who STILL can’t get no respect.

But being the dark lord of eternal suffering isn’t always fun and games. Sometimes Satan gets downright nasty and periodically tries to bring about the end of the world. Like in 1999’s END OF DAYS

where “the Man” (played by Gabriel Byrne) needs to impregnate Robin Tunney before the millennium closes. However, Girly-Man Satan didn’t reckon to tussle with Arnold Schwarzenegger! No contest!

Sometimes the devil needs a conduit, and that notion of demonic possession was never more frighteningly realized than in 1973’s THE EXORCIST. The whiskey and cigarette enhanced voice of character actress Mercedes McCambridge coming out of the scarred green face of Linda Blair created a demon that caused literal panic in some theaters. William Friedkin’s adaptation of William Peter Blatty’s novel remains one of the scariest films ever made.

It’s surprising that cries of misogyny haven’t been leveled at some of the more serious Biblical epics, as their depictions of Satan tend towards the XX chromosomes. In 1988, the devil who puts forth the titular LAST TEMPTATION OF CHRIST

appears in the form of a little red haired girl (presumably not the same one who tempted Charlie Brown centuries later). And in this year’s smash THE PASSION OF THE CHRIST

, Satan is presented as a somewhat androgynous woman carrying the ugliest baby in the world. 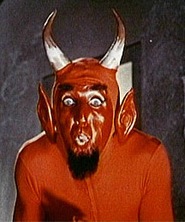 But wait, there’s more! How about Fred Astaire as the devil in a 1960s installment of ALCOA PREMIERE or Julie Newmar and Burgess Meredith both strapping on the horns in different episodes of THE TWILIGHT ZONE... or Ernest Borgnine as a Satanist transformed into a horned demon in 1975’s THE DEVIL’S RAIN... or Danny Elfman as Satan in the 1980 new wave sci-fi flick FORBIDDEN ZONE

(which starred Hervé Villechaize as King Fausto of the Sixth Dimension!!!).... the green muck in a cylinder from 1987’s PRINCE OF DARKNESS

.... Jack Nicholson as Daryl Van Horne in THE WITCHES OF EASTWICK

... and don’t forget my favorite devil, Pitch from the 1959 Mexican film SANTA CLAUS

(which I told you about last week and plan to try to squeeze into every column I can until it’s released on dvd). Point is, I’ve barely scratched the brimstone here.

Verbal Kint aka Keyser Soze may have warned that “The greatest trick the devil ever pulled was convincing the world he didn't exist,” in THE USUAL SUSPECTS

, but as long as those eternal questions about Heaven and Hell remain eternal, it’s a sure bet that filmmakers will continue to trot out the horns, pitchforks and split pea soup in an effort to scare the Hell out of us. Sorry about that line. The devil made me do it.