Floating on Hype, Soaring on Buzz 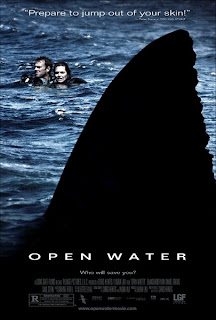 Maybe you got suckered by the “based on a true story” line. Maybe it was the real sharks. Maybe you believed some of the good reviews. But odds are, if you fell prey to the real monster of OPEN WATER

, you felt like something unfairly just took a chunk out of your wallet, as well as 79 minutes of your life. That creature: a seemingly new hybrid of “Buzz” and “Hype.” Let’s call it “Bupe.” Or maybe “Hyzz.”

“Hype” and “Buzz” are terms that have become an integral part of Hollywood vernacular. While they’re sometimes used synonymously, there’s actually quite a difference. Hype is created by the movie studio through the tactic of spending squadjillions of dollars on a blanketing ad campaign and making sure that there’s enough merchandising to fill a hundred eBay auction pages. Buzz is more organic, building often from successful festival showings, fan websites or even controversy.

Movie studios are always referring to their releases as “the most talked about” or “most anticipated movie of the year!” whether it’s true or not. In fact, actual cinematic phenomena are usually relegated to about one or two a year, and those select movies rarely stand the test of time to become classics. Hype and Buzz can be powerful fuel, but they often propel vehicles that don’t go very far.

Hype, as we know it today was perfected in 1989 when Warner Bros. set loose BATMAN

upon the world. Taking corporate synergy to previously unheard of levels, Warner Bros. used every arm of its media empire to put out Batman books, CDs and of course the source DC Comics. Hundreds of licenses were sold on top of that and for a time, it was impossible to swing a dead rodent without hitting that bat symbol. And it worked. BATMAN opened to record box office and went on to become one of the top grossing films ever. Which is curious because it seemed as if nobody actually LIKED the movie!

BATMAN may have been visually stunning, but pretty much everyone, critics and moviegoers alike agreed that its faults were many. The thin plot had enough holes to drive the Batmobile through, the acting was as leaden as the dialogue, the action about as exciting as a slap fight between two octogenarians clad in wet burlap. Tim Burton himself even admitted in interviews that scenes were made up on the spot and that storytelling is not his strong suit. Well, excuse me, then, Mr. Cure fan, but shouldn’t you just limit yourself to art direction or production design and leave the directing to the professionals?

Still, despite bad reviews and terrible word of mouth, people continued to see BATMAN, often numerous times. It was an unstoppable phenomenon. BATMAN set a new precedent for every big studio hype-fest, from GODZILLA

to the current crop of STAR WARS

product (and we use that word intentionally). But it left a bad aftertaste in the public’s mouth. These days, filmgoers’ expectations have been lowered to the point where we expect the equation to be: The bigger the hype, the lousier the movie.

Buzz, on the other hand, is a different kind of animal. People tend to trust buzz a little bit more. While Quentin Tarantino’s RESERVOIR DOGS

made him a cult figure from the start, nobody was prepared for how his follow up, PULP FICTION

would become the must-see event of 1994. But after unexpectedly winning the Palme d’Or at the Cannes Film Festival, the movie’s kinetic mixture of humor, violence and whip smart dialogue made it the movie that everyone was talking about. PULP FICTION felt less like a movie than a really cool record that you discovered through a blurb in a fanzine or a song on college radio.

But the BATMAN of buzz was 1999’s THE BLAIR WITCH PROJECT.

The brilliance of the movie wasn’t the film itself, but the concept and the deception. By pretending that the “found” footage of the three amateur filmmakers who get lost in the Maryland woods and never return was real, Artisan Entertainment benefitted from a buzz of false pretense. The extremely low-budget, improvised movie, shot with an unsteady hand held camera and often showing nothing onscreen at all elicited vociferous audience reaction, both pro and con. Riding a wave of semi-confusion (many people truly fell for it) and that rare promise of a new filmgoing experience, BLAIR WITCH had to be experienced, even if it was just so you could participate in the debate as to whether it was scary or not. As a result, the $40,000 movie grossed over $130 Million at the box office.

Earlier this year, another film became a buzzy sensation, but seemingly on its politics rather than its merits. No, not FAHRENHEIT 9/11, but Morgan Spurlock’s SUPER SIZE ME

. Certainly the topics of American obesity, the fast food industry and the triumph of marketing over common sense are worthy of a documentary. But SUPER SIZE ME was more about its filmmaker than the supposed issues at hand. Certainly, nobody was surprised by the results of Spurlock’s personal experiment of eating nothing but McDonald’s food for a month. Rather than shots of himself vomiting and shoveling Big Macs in his maw, wouldn’t more interviews with Mickey D customers who eat there every day either because they’re hooked or can’t afford anything else or out of sheer habit have better served to illustrate the power of the franchise? Or with McDonald’s employees about their regular customers and the effects of working in the grease-laden environment? As it is, the movie only has one interview with a McDonald’s fanatic, and that guy isn’t even overweight! It seems as if most people who claimed to love SUPER SIZE ME were reacting to their own feelings about McDonald’s rather than the movie itself. Spurlock should’ve used Eric Schlosser’s book FAST FOOD NATION

as his template rather than a hot dog eating contest.

By now, movie studios (yes, even the indies) have honed marketing to as exact a science as it can be. Lions Gate Films tried to create buzz by comparing the low-budget, digital video flick to BLAIR WITCH PROJECT. The movie tries to create that same tension, to draw the viewer into the water with its similarly unlikeable leads and then send them off to discuss it at the water cooler. But buzz cannot be manufactured. OPEN WATER represents hype without action figures, a hollow promise of an experience we’ve had before. To bring back the music metaphor, if PULP FICTION was Nirvana’s “Nevermind,” then OPEN WATER is an Avril Lavigne CD... they may call it punk, but that doesn’t make it so.
__________________________________________________
ORIGINALLY POSTED in REWIND on MTV.COM, August 2004
Posted by Pops Gustav at 5:20 PM