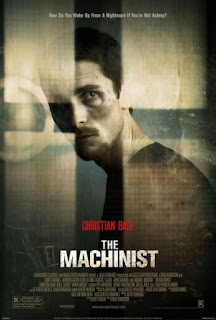 ,” you probably had the same reaction we did: “Holy #@&%, what happened to Christian Bale? Did they digitally make him emaciated?” That’s no special effect. To play the role of Trevor Reznik, whose yearlong bout of fatal insomnia has ravaged his mind and body, Bale lost over sixty pounds, physically transforming himself into what the script described as “a walking skeleton.” The man who would be Batman

dropped to 120 pounds, instilling a sense of guilt in the filmmakers that was mitigated by how amazing their lead fit the bill. It’s method acting taken to the extreme.

The precedent of actors undergoing extreme physical transformation (as opposed to merely utilizing makeup, wardrobe and effects) for a role was set by Robert De Niro in 1980’s “Raging Bull

.” To portray boxer Jake La Motta well past his prime, De Niro gained the same amount of weight that Bale lost (in what was no doubt a more pleasant regimen). Prior to this film, actors who had to play heavy would use fake padding, but method man De Niro needed to bare his flesh as well as his soul. De Niro would plump up again seven years later to play Al Capone in “the Untouchables

.” Sly Stallone no doubt had Rocky’s trainer Mick rolling in his grave when he added forty pounds to his frame for 1997’s “Cop Land

,” and still managed to woo Jennifer Connelly (ah, the power of art). Renée Zellweger added thirty pounds to her wee frame in 2001 for “Bridget Jones’s Diary

.” And more recently, Dustin Hoffman has pledged to gain all the weight it takes to play Liberace (how far he’s willing to go in other areas remains to be seen).

Tom Hanks both gained (fifty pounds!!) and lost a lot of weight to play pre- and post- desert island dwelling Chuck Nolan in the 2000 FedEx informercial, “Cast Away

That far more difficult task of slimming down for a role hasn’t gotten as much press mostly because Hollywood is already obsessed with being, uh, slender. It usually takes a film set in a concentration camp to incur the kind of extreme weight loss that helped win Adrien Brody an Oscar for his role in “the Pianist

Getting skinny is one thing, but crafting washboard abs and bulging biceps is another task altogether. Whether it’s done to play an athlete, action hero, marine or stripper, many actors have spent intensive time in the gym with a personal trainer. But it’s not as if having to get into superheroic shape for a role is any great sacrifice. After all, they’re being paid handsomely to get into the best shape of their lives. Most of us would probably not balk at the offer of millions of dollars to look like an underwear model.

and Tobey Maguire proved he could pass for “Spider-Man

” sequel (and don’t forget her shaved head for the third one). Will Smith trained to look like Muhammad Ali

. Demi Moore worked out for the one-two punches of “Striptease

” the following year. Which role, stripper or Navy SEAL required the better body we leave for you to decide.

Sometimes, though, an actor can spend too much time in the gym. Angela Bassett became obsessed with getting into shape to play Tina Turner in the 1993 biopic, “What’s Love Got to Do With It

,” but went a little too far. Her cut musculature was mostly distracting, causing us to wonder if maybe Bassett confused Tina Turner the R&B legend for Tina Turner the middleweight champion of the world.

,” but then one-upped herself the following year. Realizing that no amount of working out would give her certain attributes she needed to play doomed Playboy Playmate Dorothy Stratten in “Star 80

,” Hemingway got breast implants to make her nude scenes more realistic (how’s that for irony?).

Along with playing the mentally challenged or historical figures, camouflaging one’s beauty can be the fast track to Oscarville. Hilary Swank cut her hair, strapped down her breasts and did her best to pass for a man in the tragic 1999 film, “Boys Don’t Cry

,” for which she won the Best Actress statue. Halle Berry didn’t really alter herself for 2001’s “Monster’s Ball

,” but so much acclaim (and the first Best Actress Oscar awarded an African-American) was centered around her anti-glamorous turn that you’d have thought she did a “Face/Off

But the Ultimate Uglification Award (not yet an actual Oscar, but give it time) went to Charlize Theron for her Academy Award winning turn as serial killer Aileen Wuornos in 2003’s “Monster

,” we’re not so sure they actually had to go to great lengths to achieve those unflattering physiques. Did Jeff Bridges have to eat a whole lotta Snickers to fill out the part of “The Big Lebowski

” or was he there already? These days there seems to be a career point where middle aged actors decide to give up leading man status in favor of more character driven (read: physically unflattering) parts. Still, the fact that these thespians are able to put aside any and all vanity makes them rarities in their field.

For there are the actors... or maybe “stars” is the more accurate term -- whose vanity is so large that they refuse to alter their appearance even superficially in aid of a role. Cesar Romero’s legendary refusal to shave his mustache for the 60’s “Batman” TV show led to a Joker with makeup unconvincingly smeared over his upper lip covering.