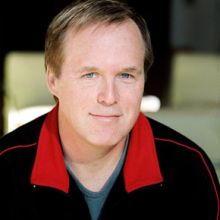 The posters for “The Incredibles

” tout it as being “from the creators of ‘Finding Nemo

,’” but its pedigree is actually loftier, in our humble opinion. Nothing against that celebrated fish tale, but we think the ad should proudly boast, “from the director of ‘The Iron Giant!’”

Director Brad Bird is an anomaly in animation, a visionary with a retro sensibility and a stark aversion to the kind of safe formulaic product that’s dominated the medium in the past decade or so.

That unique vision was first displayed in a 1987 episode of the anthology TV show, “Amazing Stories,” a cartoon entitled, “Family Dog.” The pre-Simpsons Binsford family was a typical dysfunctional TV clan, but the unnamed titular canine was something different altogether. Bird created a dog that behaved like a dog: a primal, plum-brained animal who’d “whizz on the carpet” one second and pant for affection the next. This was no sentient Snoopy. The humor came from mocking the rather arbitrary and sometimes cruel nature of the hot and cold relationships we have with our pets. Barf in the slipper: Bad Dog! Frighten off burglars: Good Dog!

“Family Dog” was designed by Bird’s pal and former Cal Arts schoolmate Tim Burton in a very Chuck-Jones-Meets-UPA style. The pilot was unsentimental, dark and hilarious. But when it was developed into a series, Bird didn’t feel that tone and look could be maintained, so he declined to take part. The “Family Dog” series lasted just five episodes on CBS in 1993.

Bird worked on other animated TV shows in the years since, including “the Simpsons,” “the Critic” and “King of the Hill,” but he made his real mark in perhaps the last great hand animated feature, the story of Hogarth Hughes, a lonely young boy and his best friend: an enormous alien robot.

” by British poet Ted Hughes (the widower of poet Sylvia Plath). The first adaptation of the story was Pete Townshend’s 1986 album, “the Iron Man

,” and it was later developed into a London stage play. The project was already in the early stages of development at Warner Bros. Animation when Bird came on board.

Working with screenwriter Tim McCanlies, Bird made some major alterations to the story, changing the setting from England to rural Maine in the late 1950s and adding some characters. Bird also made the giant an alien creation and, while keeping the theme of the cycle of life, added another subtext: What if a gun had a soul and chose to not be a gun? 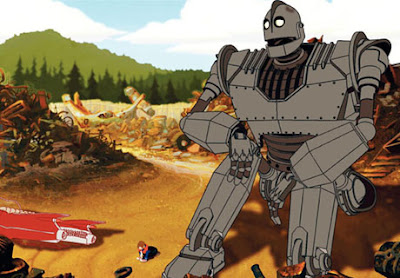 “The Iron Giant” combined traditional 2D animation with computer technology in ways that were much more seamless and impressionistic than previous attempts. Each of the characters were hand drawn except for the robot. Wanting it to feel both alien and mechanical, Bird and his crew of animators used the less organic and more precise method of computer animation to craft the huge walking weapon. But they were careful to not go overboard with the technology, choosing instead to imagine how animators in the 1940s would have drawn the giant, giving it a complementary flat, soft look rather than an obvious CGI aesthetic.


The overall style of the film is unabashedly and gloriously retro, lavishly designed, filled with hundreds of period details. There’s the black and white horror film that Hogarth watches on TV and a variation on the classroom nuclear attack film, “Duck and Cover.” Beatnik artist Dean (voiced by Harry Connick) creates abstract metal sculpture that would make Alexander Calder envious and lives in a scrapyard shack decorated with a Jack Kerouac poster, butterfly chair and tiki masks. Hogarth shows the robot a pile of comic books, each meticulously redrawn in the style of its original artist.

“The Iron Giant” has a soundtrack

that swings as well, utilizing period music that’s not the usual “Rock Around the Clock.” Cool rock and jazz sides by Jimmie Rodgers, the Nutty Squirrels, Eddie Platt and others meld with a sensitive score by Michael Kamen

. Musically, the film has much more in common with smartly scored movies like “Rushmore

” than your typical schmaltz-filled Disney flick.

But what makes the film such a classic is its remarkable balance. The character design is charming without being cutesy. The movie is heart-tugging without being mushy. It’s a kid’s film that’s incredibly adult (it’s even got swearing!). It’s old fashioned and utterly modern. Most of all, it teaches a lesson without being preachy. Its moral, “You are who you choose to be” is a simple, yet powerful truth that we all sometimes forget. The moment where the Iron Giant chooses to be “Sooooo- perrrrrrr- maaaaaaan” has squeezed tears out of some of the tightest ducts mankind has ever known.

, Brad Bird knows that kids can handle some tough concepts, and he never insults the intelligence of his audience. The greatest children’s entertainment has always been challenging and sometimes difficult. But those are the books, films and shows that linger, and they can transcend pop culture to become not just art, but timeless classics. Like “It’s a Wonderful Life

,” “The Iron Giant” is one of those films that was a failure initially, but whose stature continues to grow with time. Warner Home Video is releasing a two disc special edition this month, and the reviews of “the Incredibles” seem to indicate that Bird is no two-trick pony. He’s the Wes Anderson

of animation, a visionary who just might turn out to be the most important animator since the late, great Chuck Jones