An Open Letter to Chris Ware

My junior (and final) year of college was spent at Indiana University of Pennsylvania as a fine arts major. I was never a fine artist. I transferred to IUP from Millersville University for two reasons: To get away from the hometown and for a Girl (Ellen, where are you now?). MU was more suited to my ambitions, a more commercial and graphic arts oriented school, and my grades were good, great at times. At IUP, I had it a little rougher. In particular, there was one drawing professor who just didn’t like my stuff. I had a figure drawing class with him and he would constantly tell me my work was too stiff, too tight, too cartoony. Now, I had NEVER had trouble with figure drawing, I’d been drawing people since I was four years old. Okay, most of the time they were wearing colored spandex and throwing punches, but still.... I knew anatomy, I could draw people. My previous figure drawing classes at Millersville earned me easy A’s.

So, one day, late in the semester, I just said Fuck It. The two hour class began and I quickly sketched out the model. After about five minutes, I put down my pencil and just sat there chatting with the person sitting next to me. The professor slowly made his away around the classroom, and got to me about a half hour later, right before the break. He looked at my very fast, very rough drawing and patted me on the shoulder, saying “Much, much better... you’re starting to get it.”

Shortly after that, I decided to drop out of college, but that’s another story.

The point is, to different eyes, some people’s art looks better in the initial stages. That’s how I feel about your stuff. I always like your CD covers and magazine illustrations and book jackets, but your comics have always left me cold (as I mentioned in my review of Craig Thompson’s BLANKETS

). The stiff lines, mechanical precision and mathematical layouts always made me feel detached from the work, I never cared about anyone in your stories. 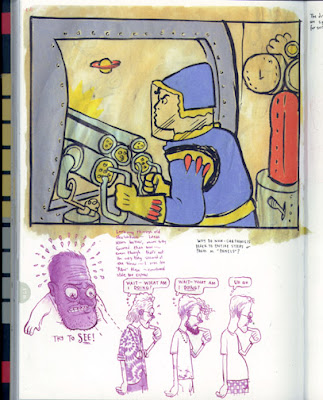 But at the Strand last weekend with my pals John, Troy and Andrea, I picked up your new book, THE ACME NOVELTY DATE BOOK: 1986-1995

and was blown away. Your rough pen & brush work is simply beautiful. The figures, the sketches, the drawings of toys and redrawn old comic book and strip panels and characters, the landscapes... I love ‘em all. Even the rough versions of your comics moved me much more than the finished product ever has.

So, I guess I owe you a bit of an apology. You’re not overrated... you are a pretty amazing cartoonist... it all boils down to that old bugaboo subjectivity (doesn’t everything?). I may not enjoy your comics, but I do very much like your art.

P.S. Did Fantagraphics refuse to publish this because it has superheroes in it? Hee hee!

Email ThisBlogThis!Share to TwitterShare to FacebookShare to Pinterest
Labels: 2003, Comics