So, just for the record: I am not a success. I am not any of the things that I’ve spent most of my life wanting to be. Despite the occasional published work (sometimes even in venues other than this website), I can’t honestly call myself a cartoonist, illustrator or writer (if one chooses to define those as “jobs”). Rather than being a freelancer who bartends on the side for extra cash, I’m a bartender who does a tiny bit of freelance work (usually for little or no pay). And it’s mostly my fault.

It’s not that I don’t have a good work ethic; This German boy had that instilled in him at a young age by a father who taught that any job isn’t done unless it’s done well. And I’m not untalented: I’m a pretty good writer, a fair cartoonist and a decent artist. I have an excellent sense of design. These are my honest, immodest beliefs in myself.

So what the heck is my problem? How come I’m not making a living at one of my so-called passions? Is it just that I’ve never been able to focus on one thing and make that my goal? Should I pin it on the rampant nepotism in the media world that keeps giving the work to the same people? Maybe I really don’t have enough talent. But I think it’s more likely my problem lies in something I’ve been doing for as long as I can remember...

Most great artists (in any genre) are not collectors. Naturally, they don’t live in a vacuum (well, usually) and most artists can list their influences, both in and out of their chosen media. But they can’t be bothered to be obsessive about other people’s work. They’re consumed by the drive to create (Some may point to Quentin Tarantino as an exception to the rule, but I think he bears me out: If Quentin weren’t the obsessive pop culture maniac he is, he’d probably be far more prolific).

I’m consumed by the drive to consume. As much as I hate to admit it, most of my time is spent gathering and absorbing the creative output of others: cartoonists, musicians, filmmakers, artists, writers whose work inspires me... or so I used to think. 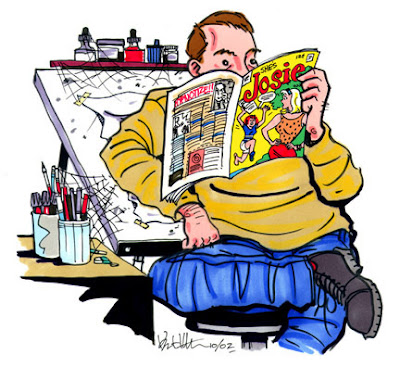 Maybe their work doesn’t inspire me. Maybe it just... distracts me. Keeps me occupied. Keeps me from creating my own work.

I come from a family of collectors. With Mom, it’s blue glass, cats and hearts. For Dad, it’s Coke memorabilia, tin toys and lawn mowers. My aunt collects dragons and kaleidoscopes. My brother has tens of thousands of records. For me, it’s been a number of things, but mostly comic books.

At its zenith, my comic book collection probably numbered around ten thousand. About ten years ago, however, I went through a massive cleaning-out stage (the first of many) and slashed my collection in half. In the years since then, I continued whittling it down little by little.

When I discovered eBay some years back, it initially helped with the crap-reduction. In my first six months of selling my own junk (comics, books, stuff acquired in my ten years in the music biz), I netted over $3500.00 and got rid of a lot. But then I’d switch gears, and start BUYING crap-junk-stuff, including items I’d spent the last ten years eliminating. I’d think of a short-lived comic from the 70’s that I used to own and start searching eBay for a run of that book. It’s a cycle that’s been repeating ever since.

). The character’s love/hate relationship with his collection resonated. “What, you think this is healthy? You can’t connect with other people, so you fill your life with STUFF.” “What makes you think I wanna meet someone who shares my interests? I hate my interests!” For better or worse, I feel more connected to Charlie Brown, Superman, Frank Sinatra and Alfred Hitchcock than to most people I know.

I’ve always admired the Zen lifestyle, people who have only a dozen books, not because they’re illiterate, but because they don’t need to own a lot of stuff. They can read a book and then pass it on instead of creating a huge library of books read only once.

But at the same time, and with at least as much fervor, I... love.... my..... stuff. I get genuine joy from my collections, and I just like the way a wall of packed shelves looks.

Also, my sense of nostalgia is certainly stronger than most people’s. Pulling out an old comic book can make me think of when I originally bought it, which drug store, with whom I rode my bike there, what flavor Slushie I got.... I think much of this has to do with the fact that my family never moved, my parents still live in the house that my Dad built in the fifties. As such, every trip home conjures up memories of the past, many of them forever tied to such stimulus as, yep, television.

I’ve got a lot of distractions all around me. Of my thousands of CDs, how many do I actually listen to? Of my hundreds of books and thousands of comics, how many will I read more than once? How many of my 197 DVDs (as of this writing) will be watched once and then sit on the shelf forever? How much can I rationalize my enormous library as reference material (especially since the internet has made that obsolete)?

And this isn’t even dealing with the amount of money I’ve spent on this stuff. That’s a whole OTHER column. But just averaging the cost of each DVD at $18, that’s over $3500.00 in just the past two years. So, is it okay because I’ve sold so much on eBay? Or is it just more time wasting?

Of all these things, music is certainly the least “distracting.” You’d be hard-pressed to find an artist who DOESN’T work while listening to music. Music can actually keep you from being distracted, can keep your spirit up, keep you energized. Right now, the brand new Foo Fighters record is blaring in the background, and I swear it’s helping rather than hindering the process.

The question I’m asking myself is, am I forever doomed to be a consumer, and only a consumer? Do I continue with my projects-list, keep my sketchbook, continue to buy art supplies? Will the graphic novel I’ve recently made my biggest priority continue to be so, or will I get distracted yet again and let it languish YET AGAIN? Is writing this column itself a distraction, or is this producing something?

I still have time. At my 20 year high school reunion some weeks back, one of my old chums admonished that I “get a real job.” I was a bit taken aback, but it wasn’t until a couple of days later that I got mad. Who’s he to tell me to give up my dreams and suck it up and get a Job-Job? The best advice my father ever gave me was “don’t work at a job you hate,” something he did for forty years. I still have the luxury of being able to pretty much do whatever I want (something rare for most men approaching 40).

Maybe I’m being delusional, maybe I just don’t wanna give up. Ask me a year from now. Right now, I gotta get back to work.... right after I read that article in the new TIME OUT NEW YORK, check what’s on TV, look at the new COMIC BOOK HEAVEN, see if my MARY TYLER MOORE DVD showed up yet, check my e-mail......

POSTSCRIPT, September 2010:
Well, to a certain degree, this malady remains. I've certainly been published a lot more places since this piece than before it, but the distractions have not gone away.