Keanu's No Constantine (a history of comic book movie miscasting) 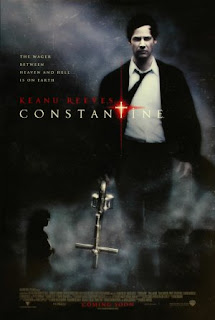 Any time a character from well known literature is cast into flesh, there are going to be grumblings. The old chestnut is that no film can match the movie in our head as we read a novel ourselves, visualizing the characters so that they match our own perspective and experience. A completely personal take on the words on page then occurs, and few people envision Tom Cruise as the vampire Lestat

. Literary purists chafed as much at Demi Moore’s casting as Hester Prynne in “The Scarlet Letter

about the hypocrisy of Puritan New England. And many felt that Harvey Keitel’s Judas in 1988’s “the Last Temptation of Christ

But when it comes to adapting literature that already includes pictures, i.e. comic books, the fans of the source material become even more vocal. There’s no tougher casting job in Hollywood than matching an actor with a visually established, sometimes iconic character. And when they miss, whoooo, do the fans start grousing. Lots of comics fans were none too pleased when they heard that Keanu Reeves was hired to star in “Constantine

” series in the 80s, artists Steve Bissette and John Totleben modeled him after Sting (who was then freshly out of the Police

and hadn’t yet become the new agey tantric sex advocate). Constantine was a spiky British blonde with a penchant for punk rock chicks, not a dark haired valley dude. I guess we should be grateful Keanu didn’t try to strap on the British accent, especially after his disastrous attempt to do so as Jonathan Harker in 1992’s “Bram Stoker’s Dracula

” may prove to be the exception), they should at least try to remain faithful to the spirit of the source material, and nothing squelches that like a bad lead.

Even back in the pre-internet days of 1989, there was still enough fanboy uproar to create a media frenzy over the casting of Michael “Mr. Mom

.” And while the film became a phenomenon, silencing many skeptics, in retrospect, those initial concerns weren’t totally unwarranted. Director Tim Burton’s rationalizations about a physically imposing Bruce Wayne not needing all the Bat-Gadgets don’t quite hold when viewing scenes where it looks as if Keaton is swimming in a costume he’s just not big enough to fill. His shoulders slump, the cowl sits askew on his very unsquare face. Certainly, Keaton’s performance in the first two Bat-films is enjoyable, but Batman needs more than eyebrows and an attitude.

Not that Keaton’s successors were any better. Val Kilmer was too much of a pretty boy to carry the dark mantle in “Batman Forever

” and George Clooney was too coy in “Batman and Robin

.” We’ll see how Christian Bale does in this summer’s “Batman Begins

Some more narcissistic actors allow vanity to get in the way of translating a character. In 1990’s “Dick Tracy

,” some of Hollywood’s biggest names, including Al Pacino and Dustin Hoffman allowed themselves to be hidden under prosthetic makeup to create the monstrous villains of Chester Gould’s classic comic strip

. But the titular detective’s most distinctive physical feature, Tracy’s square nose, was nowhere to be seen. Beatty’s vanity was so extreme that he even demanded every drawing of his face in the comic book adaptation be replaced with one of Disney’s “official” images that resembled him. 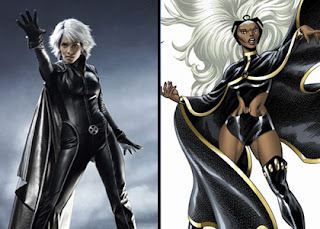 One of the ironies inherent in the pejorative tone used against “comic book movies” is that comics are often far more adventurous in how they depict their heroes. Take the character of Wolverine from “X-Men

.” In the comics, Wolverine is barely five feet tall, a gruff, hairy beast with little of the suave charm that 6’2” Hugh Jackman brought to the role onscreen. Now, I happen to think that Jackman was great as Wolvie (different media do have different needs, after all), but die-hard fanboys were not happy (fangirls were another matter). As far as the X-Men go, I had for more problems with Halle Berry playing Storm. Beautiful as she is, Berry is the farthest thing from the exotic 5’11” African goddess that Ororo is in the comics. Iman or a younger Grace Jones would’ve been far more appropriate.

.” Affleck’s tall and handsome and has done both drama and comedy, so why was the sight of him clad in the red leather so ludicrous? It all has to do with preconception. We don’t think of Affleck as being a dark, tortured superhero. We think of him as being kind of a dorky frat boy. When he hangs from the ceiling fan at Josie’s bar and growls that he’s looking for “Justice!!,” it’s not believable at all, it’s just... funny.

Which is why it’s usually best in adapting comics to film to go with an unknown. Has there ever been better casting for a superhero than Christopher Reeve as Superman

? Director Richard Donner and casting director Lynn Stalmaster knew that the figure was so ingrained in the public consciousness that putting a familiar face in the red, blue and yellow costume would’ve made that all-important suspension of disbelief that much harder. Of course, there are exceptions to this rule (Tobey Maguire makes a great Peter Parker

), but my guess is that Brandon Routh stands a much better chance of being accepted as the new Superman

Granted, criticism of an actor’s portrayal of a character before the cameras have even started rolling is unfair (after all, different comic book artists have their own interpretations of these characters... Jim Lee’s Superman looks very different than Darwyn Cooke’s or Alex Ross’). But this kind of extreme premature scrutiny isn’t going to go away as long as Hollywood continues to mine the comic stores for source material. It’s true, the grousing about Keanu as Constantine didn’t go far beyond the Hellblazer fansites and comic book press (the general public had never heard of this character). But just wait until Warner Bros. casts Jessica Simpson as Wonder Woman...
____________________________________________________
ORIGINALLY POSTED in REWIND on MTV.COM, February 2005
Posted by Pops Gustav at 12:17 PM