Playing a Musician is One Thing. Playing an Instrument is Another.... 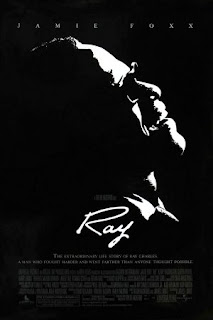 in the new biopic, “Ray

.” Three surefire tickets to Academy nomination are (1) play a historical figure ; (2) play someone with a physical handicap; and (3) play against type.

Every acting part has its own challenge. In portraying a musician, perhaps the most difficult is being convincing as a performer. It’s one thing to learn and speak your lines convincingly (and not all actors have accomplished that), it’s another to make an audience believe you can, in fact, rock (or swing or boogie or tickle the klavier, whatever the case may be).

In 1953, James Stewart starred in “The Glenn Miller Story

” as the big band leader who died in World War II

. Stewart is one of cinema’s most beloved figures, but a believable trombonist he did not make. Two years later, Steve Allen tried a little harder in “the Benny Goodman Story

.” Allen actually may have been the first actor to take lessons just to learn how to fake playing an instrument in a movie (the real Goodman

played his clarinet from offscreen while Allen acted). Sal Mineo likewise did a believable job mimicking the frenetic drumming

.” And, as anyone who’s ever watched “the Partridge Family

” can tell you, fake drumming is easy to spot.

When bop booted big band out of the spotlight, Charlie Parker

was at the forefront. The alto sax innovator’s tremendous talent and drug addiction were torturously delineated by Forest Whitaker in the 1988 Clint Eastwood film, “Bird

.” When dealing with an artist as singular as Bird, it’s almost mandatory to use the original recordings (which Eastwood had cleaned up and isolated, no easy task in those pre-computer days). But Whitaker perfectly captured the extroverted, unpredictable style of Parker, and the film paints an indelible portrait of one of jazz’s greatest figures.

On the opposite end of the believability spectrum, we have 1972’s “Lady Sings the Blues

.” The tragic tale of Billie Holiday

(arguably the most important and instantly recognizable female singer in the history of jazz) takes a back seat to the vanity of this movie’s star, legendary R&B diva Diana Ross. Having a singer play a singer can work if the actor is willing to sublimate his or her own ego in favor of capturing the subject. And Miss Ross’ well documented ego was NOT willing to take a back seat. Hence, no weight gain (see last week’s REWIND) and no lip synching, and no attempt to imitate Holiday’s singular smoky phrasing. Curiously, Ross was awarded an Oscar nomination for her campy performance. Lady Day deserves a remake.

Country music certainly has its share of biographical tales to tell (where, oh where is the Hank Williams

Story?!?), yet the only two major film biographies were about two of its legendary women singers. In 1980, Sissy Spacek turned in an Oscar winning performance as Loretta Lynn

. While Lange semi-convincingly lip-synched to original Patsy recordings, Spacek actually sang all of Lynn’s songs herself, which were even released as a soundtrack album

Once the Rock and Roll era began, music stars usually had to sing and play at the same time. Decades later, this presents a unique challenge to actors who attempt to channel those seminal rock stars.

,” he did all the singing and playing himself. Rather than go for a strict Holly impression, Busey attempted to channel the essence of the 1950s rocker

. To make the performances ring true, the music was recorded live during filming rather than in the studio. But wait, there’s more! To prepare for the role, Busey put together a band and toured, performing Buddy’s songs before an audience so he’d be comfortable doing them for the movie. It all paid off. Busey received an Academy Award nomination for best actor and “The Buddy Holly Story” holds up as one of the best rock bios (despite some revisionist history).

Dennis Quaid may have nailed the hair of Jerry Lee Lewis

,” but he was startlingly unconvincing banging the keys & belting the rockabilly bad boy’s songs. Lip synching broadly, Quaid seemed like a live action cartoon. To make the chicanery even more jarring, Lewis recorded new versions of his songs to be mimed, and the Killer’s chops had obviously aged by then.

While they’ve been depicted in numerous films, onscreen performances by fake Beatles (not counting the Monkees

” deals with the Fab Four’s formative time in Hamburg, Germany, when Pete Best was their drummer and Stu Sutcliffe was a fifth member. While the actors were serviceable in their roles (both on and off stage), the credit for capturing the vitality of the band really goes elsewhere. The actors synched to a group comprised of Dave (Soul Asylum

) Grohl. This made for a pretty rockin’ garage band

, covering the Beatles’ covers such as “Please Mr. Postman,” “C’mon Everybody” and “Twist and Shout.”

Val Kilmer may be a wash as an action hero, but he totally threw himself into the role of Jim Morrison

.” Many have noted how uncannily dead-on Kilmer’s onstage performances are in the film, but exactly how difficult was it to slip into the Lizard King’s skin? Morrison was so overly dramatic in both voice and movement that practically anyone can do a decent impression of him; he’s the rock equivalent of Jimmy Stewart or John Wayne. If that makes sense.

But what if you’re trying to play a musician who couldn’t play well? Does that make it harder or easier? Gary Oldman faced that challenge in 1986’s “Sid and Nancy

.” As the archetypal punk rocker, the Sex Pistols

’ musically (and mentally) challenged bassist Sid Vicious, Oldman spat, snarled and struggled to master a few chords while strung out on heroin and the most grating girlfriend in the history of rock. Oldman (and his costars) brilliantly evoked the powerful nihilism of that groundbreaking era where attitude and emotion trumped virtuosity.

The list goes on, of course. Tom Hulce as Wolfgang “Amadeus

” (making him the only actor to play both a classical composer and a punk rocker). Larry Parks in “The Al Jolson Story

” (no, she didn’t sing herself... Selena’s family felt it was imperative the original voice was used). The Sex Pistols (again), Joy Division

and the Happy Mondays

all got faux screen time in “24 Hour Party People

” was so convincing it had some people thinking the film was a documentary.

And note that we didn’t even get into the overstuffed vault of TV movies and series tackling the life stories of those who make the music. That’s a whole book, and a mostly negative one at that. But moviegoers are cynical and savvy these days; We demand more believable performances from our actors, whether they’re battling Orks or fronting a faux Velvet Underground. CGI can turn a skinny, pampered actor into a valiant warrior, but it can’t yet convince us that a comedian can plink magic out of a piano.