Nobody move! All we want is the top 10 Bank Heist Flicks! 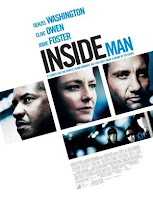 Ah, the cinematic bank heist. Always meticulously planned, strategized to the smallest detail, manned with the best thieves money can buy. And yet, as the new movie “Inside Man

” reminds us, it almost never goes according to plan. To wit, our list of the top ten Bank Robbery Movies....

(2001)
Diane (Marley Shelton) is a bubbly, popular cheerleader who gets knocked up by her quarterback boyfriend Jack (James Marsden). The couple try to do the right thing, but making ends meet on Jack’s video store salary is tricky. So, inspired by the Keanu Reeves flick “Point Break

,” Diane decides that bank robbery is the answer. Enlisting the other cheerleaders (who, after all, are all for one, etc.), Diane studies caper movies such as “The Apple Dumpling Gang

” and the #1 film on our list for Heist Tips... which, if she were paying attention, she’d know is a BAD idea. This satire of the high school caste system is an acquired taste, but a pep squad in cheap halloween masks robbing a bank is a sight to behold.

,” Steve McQueen starred in this heist flick based on a true story. McQueen plays George Fowler, who, having recently been expelled from college, shifts his focus to a life of crime. George joins a motley gang of crooks planning to hit the local bank, but mistrust, jealousy and greed make for a rusty machine, and things don’t go so well. The movie’s reality is accentuated by the use of actual locations and performances by some bank guards and customers who were involved in the real life story. The film’s also notable for its influence on one of the greatest crime movies of all, Quentin Tarantino’s “Reservoir Dogs

(2000)
Gal Dove (Ray Winstone) is a happily retired British safecracker, living in the Spanish desert with his vivacious wife, enjoying the company of their friends and the high life bought by a fruitful career in crime. But it all comes crashing down like a boulder in a swimming pool when mobster Don Logan (a positively riveting Ben Kingsley) shows up to recruit Gal for one last bank job. Gal has no interest, but Don’s not taking no for an answer. The bank robbery, complicated as it is, is actually just the maguffin in this film, but the movie is such a crackling good neo-noir, we couldn’t leave it off the list! No! Nononononononononononono!

(1940)
W.C. Fields was near the end of his career when he played Egbert Sousé, a (surprise!) drunk who, after rolling blotto out of a bar called The Black Pussy, accidentally foils a bank robbery, subsequently landing a job as a security guard. In typical Fields fashion, the film is loaded with shrewish women, rotten kids and lots of hooch (as well as some unfortunate racist humor). As bracingly black as comedy gets. 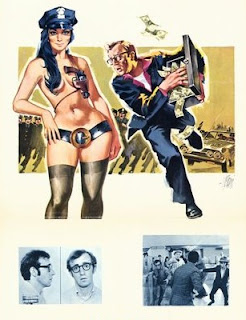 (1972)
Movies don’t get more testosteroney (our word) than this heist/chase flick, adapted from a Jim Thompson novel by Walter Hill, directed by Sam Peckinpah and starring Steve McQueen and Ben Johnson (we feel like a little girl just typing those names)! In the movie, Carol McCoy (Ali MacGraw) makes a deal under the sheets with a Texas politico to get her robber hubby Doc (McQueen) paroled from prison, in exchange for a cut of their next heist! Double crosses abound, and a torrent of bullets, car chases and blood follows (this is a Steve McQueen film, after all). Plus Sally Struthers gets a smack!

5. Take the Money and Run

(1969)
Woody Allen’s hilarious mockumentary about petty thief Virgil Starkwell (Allen) could be considered a cautionary tale of how NOT to rob a bank. For instance, make sure you have good penmanship, because no teller is going to be threatened by your possession of a “gub.”

” Mann is practically infamous for style over substance, and this thriller is as slick and shiny as a snakeskin suit. But under the surface lies some intense character drama as L.A. police detective Vince Hanna (Al Pacino) matches wits with bank robber Neil McCauley (Robert DeNiro). The movie’s marketing focused on the fact that it was the first (and, to date, only) time the two movie legends appeared onscreen together, which must have driven both the director and the rest of the cast nuts. But the movie became far better known for its blistering, intense “last big score” bank robbery and subsequent shoot-out (blamed by those who scapegoat media for inspiring some real life bank robberies).

(1967)
Warren Beatty and Faye Dunaway star as the Depression-era bank robbers, with some stellar supporting performances by Gene Hackman, Michael J. Pollard and Denver Pyle. At the movie’s release, director Arthur Penn was widely criticized for romanticizing the criminals and, moreso, for putting more blood onscreen than any other movie to date. With time, however, the film’s visceral images, razor-sharp acting, writing, direction and editing have ushered “Bonnie and Clyde” into the pantheon of groundbreaking classics.

(1990)
Bill Murray co-directs (with Howard Franklin) and stars in this black comedy that’s gaining cult status. Murray plays Grimm (just “Grimm”), a fed-up New Yorker who enlists the aid of his girlfriend Phyllis (Geena Davis) and high-strung pal Loomis (Randy Quaid) to pull off a clever bank heist involving a clown suit, the threat of vomit and a Monster Truck. But getting away with the cash proves to be far, far easier than getting out of New York as the fleeing trio encounters a stream of urban nightmares. Ostensibly “The Out of Towners” as crooks, this funny charmer is also a nice time capsule of NYC just before it became Disneyfied. 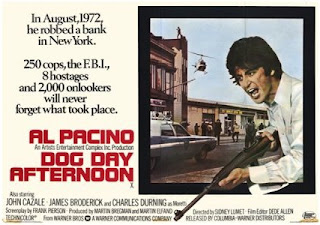 ” at the top of a list of movies about power-mad newspaper magnates. Al Pacino stars as Sonny Wortzik, a man so desperate to pay for his lover’s sex-change operation that he resorts to robbing a Brooklyn bank. But when he and his accomplices are cornered by the NYPD, the ensuing media frenzy turns Sonny into an unlikely anti-hero, a voice of the frustrated common man. Filmed on location, the movie captures the sweltering, oppressive heat of summer in New York, and as with other contemporary films like “Taxi Driver

,” the city is as much a character as any played by an actor. Directed by Sidney Lumet, the film is a prime example of why the gritty, character-driven movies of the 1970s have caused some critics to label that decade American film’s greatest era.

Certain genres that held movie audiences rapt in the 20th Century have been rendered obsolete by technology and changing times. You don’t see too many musicals about cafe society any more. But as long as we live in a capitalistic society with an ever-widening gap between the haves and the have-nots, the Bank Robbery Movie is sure to evolve with the times. But geez, online bank heist flicks are gonna be dull!
__________________________________________________
ORIGINALLY POSTED in REWIND on MTV.COM, March 2006
Posted by Pops Gustav at 6:18 PM