from XBox to Cineplex 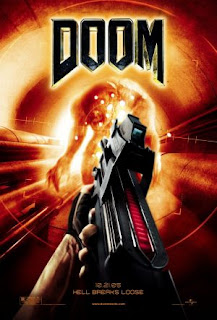 In case you didn’t get it from the trailer’s use of first-person, gun-totin’ POV, “Doom

” is based on the video game. It might be a tad patronizing to suggest that audiences need the chainsaw over the head, but the legacy of movies based on video games isn’t exactly a Fellini film festival.

We think nothing of movies being based on other media such as books, plays, comics or TV shows. But every time Hollywood announces another film that’s adapted from a video game, everyone groans... even rabid gamers. Why is it that almost everything that springs from the XBox to the big screen struggles to connect with an audience?

It all started with Luigi and Mario. In 1993, Hollywood brought Nintendo’s leaping “Super Mario Bros

.” to life, as played by Bob Hoskins and John Leguizamo. From the first frame, this movie was a headache inducing mess that failed to live up to its tagline, “This ain’t no game, it’s a Live-Action Thrill Ride!”/ You could blame it on the lack of technology available to filmmakers (and it took four directors to make this movie), but then again, the Nintendo video game technology of the time was fairly primitive as well.

The biggest hook that multi-million dollar movie adaptations of “lower” artforms (like video games, television shows and comic books) have is expansion of our preconceptions, making a spectacle of what may have become mundane. We’d seen Spider-Man swing through the canyons of Manhattan thousands of times in the comics and cartoons and (sort of) in extremely low-budget network TV. But when Sam Raimi and his team of FX nerds brought Spidey to a realistic swingin’ life (much moreso in “Spider-Man 2

” than the first film

But video game graphics are getting so complex and advanced that movie CGI isn’t THAT much better than what the gamer can control with a joystick. In fact, many critics comment (albeit pejoratively) that lots of movie FX look like a video game.

And then there’s that pesky exposition that movies demand.

.” But leaving the characters lacking personality or depth makes for a bland non-stop action pic, and that’s no good either. 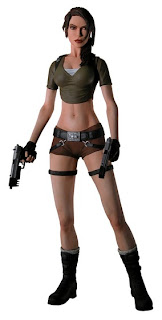 One could also perversely speculate that certain fans of video games reject film versions because of physical human limitations, and we’re not talking unbelievable wire work. Maybe some male gamers prefer their female characters to be, well, more unrealistically proportioned. Few people would deny the hotness of Angelina Jolie, but short of some massive CGI enhancement, even she couldn’t replicate the impossible figure of the video game version of Tomb Raider

But there’s one inherent problem with video game movies that rises above the rest, one that puts “Doom”’s Reaper and “Mortal Kombat

”’s Sub-Zero in the same league as Oliver Twist

While it might seem ludicrous at first, consider that video game movies actually have more in common with film adaptations of literature than anything else. It’s all about interaction versus passivity.

Reading a book is not a passive activity. You have to use your mind, not just to take in and comprehend the words on the page, but to use your imagination to enhance them; To build a visual vocabulary of your own that fits the author’s verbal imagery. We read a book and direct the movie in our head, casting it ourselves, whether it’s with movie stars, friends and family or personae of our own creation. And the more books you read, the more honed your imagination becomes(hopefully not turning you into one of those annoying snobs who thinks that movies are ALWAYS inferior to the books they adapt).

While video gamers have some say as to the appearance of their digitized proxies, they have far more control over their actions. Which is why watching a movie of a video game is so frustrating: It’s entirely passive; You can’t dictate what happens onscreen. Imagine a level 10 player pulling his hair out when Master Chief kills one of his own teammates in “Halo: the Movie

Ironically, the only time a movie tried to replicate the unpredictable experience of game play, it wasn’t based on a video game, but rather an old fashioned board game. “Clue: the Movie

” (1985) brought the murder mystery game to life with a unique twist: the film had three different endings. Depending upon your local theater, the killer turned out to be one of three people, perhaps Mrs. White with a rope in the billiards room? The gimmick actually HURT the film’s box office, but made it a minor cult hit when it was released on video. It seems only a matter of time before a video game movie attempts some similar kind of alternate ending trick, perhaps with some sort of digital audience participation.

But it still seems as if the experience will pale with the thrill of the battle that video game fans can enjoy on their home systems, fighting on the couch in their underwear.