An ex-girlfriend of mine thought that when I (or anyone) called a band’s new release a “record,” it sounded pretentious. To her, the term was an anachronism that was used by music snobs to separate themselves from the younger, presumably less informed music buying public. Pretension was never my intent. When I started buying music, I bought it on vinyl LPs, or RECORDS. I still use the term. But it does beg the question: With so many different ways to acquire and listen to music in 2005, what are the proper semantics?

Note the absence of the R-word from the names of the so-called “Big Four” music conglomerates: Sony BMG Music Entertainment, Universal Music Group, the Warner Music Group and the EMI Group. But most of their affiliated labels, as well as the majority of indies, still attach the word “Records” to their names. Since the etymology of the word is a shortening of the term “recording,” it’s technically still correct usage. But we’ve come to think of records as those fragile, scratchy vinyl beauties / beasts (depending on your perspective). 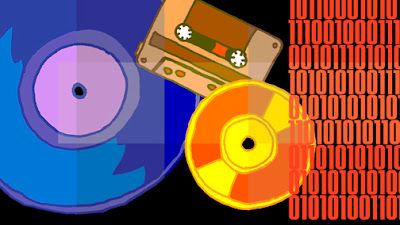 Many also cling to the word, “album,” a term that seems to be generally more accepted by non-audiophiles even though it’s really more anachronistic than “record.” The word “album” in the context of recorded music originally referred to bound collections of 78-RPM records. The fast-playing shellac could only hold a few songs per side, so complete (usually classical) recordings had to be stretched out over up to a half a dozen discs. The pasteboard-covered collections with embossed bindings resembled photo albums more than anything else, and the name stuck. When the vinyl LP was introduced by Columbia in the late 1940s, single sleeved jackets became the standard, so the term “album” became a misnomer, but it had by then achieved a whole other meaning.

I always liked the Beat term, “Side,” as in “Hey, Daddy-O, are you hep to that new Coltrane side?” (Jazz hipsters have always had the best slang). It’s a term that’s faded, for the most part, although since CDs only have music on one “side,” it would seem to fit that format even better than a two-sided LP.

One catch-all term that never, ever sounded right to me was “tape,” as in “I shoplifted that Judas Priest tape at the mall the other day,” a sentence fraught with so many wrongs I don’t even know where to begin. Maybe it’s that the tape formats (reel-to-reel, 8-track and cassette) were all wonky and substandard at best, even with the greatest care, they were doomed to die a premature death. “Tapes” were never a permanent “record” of the music on them and anyone who used that word as their primary demarcation was just not to be taken seriously as a music collector.

I worked in the music business in the late ‘90s, at the tail end of the era of major label artist development. That seeming lifetime ago, it would always wrankle me to hear industry wanks refer to albums as “product” or “units.” I never used those words; I worked for a Record Label, not a Unit Factory. But to sales people or radio promoters who would sit in presentation meetings and reflexively nod their heads to music being played while actually not paying attention (earning the pejorative term, “woodpeckers”), nomenclature wasn’t an issue. They might as well have been selling shoes.

“Record” can be synonymous with both album and single, as can the more modern “disc,” but for some reason, neither that term nor “CD” ever caught on with music geeks as a catch-all. “Did you hear that new Sloan CD?” may be literally correct, but it lacks grace. It conjures the cold sterility of digital technology. But “disc” sounds positively poetic compared to “MP3” or “AIFF.”

When it comes to digital files that are played through a computer or portable MP3 player, terminology becomes even fuzzier. Even if an entire album is downloaded, how often is it listened to straight through as sequenced? Random playlists usually dictate iPod listening (especially if it’s via the Mini, where that’s the only option). So imagine an exchange between friends who run into each other on the street:
“Hey, what are you listening to on your iPod?”
“The new Sleater-Kinney... uh... record”

It just feels, sadly, not right. But what’s the alternative? “The new Sleater-Kinney file” sounds like an FBI security check, “Playlist” indicates a personal sequencing rather than the album’s track listing, and just leaving it hanging with “The new Sleater-Kinney” feels incomplete. Do we need to come up with a new word, a new catch-all that can be used when referring to records, CDs, tapes, MP3s, whatever? Or in this era of single-driven downloads, is the concept of a full album becoming a thing of the past?

I’m old (school) enough to continue purchasing hard copies of music that I want. But regardless of what new format the music industry forces on us, to me, they’ll still be “records.” If and when the day comes where nobody knows what I’m talking about, maybe then I’ll start calling collections of recorded music something else. How about... “Peas?” Get it? Peas in a pod? An iPod? Peas?

I still say "albums," and I think that it's appropriate.