If you think about it, it’s actually arbitrary to look at the first of January as an actual fresh start (rather than what it really is: just another day). But in the spirit of the holiday, we’ll go along with the opportunity to reflect on the 365 days that just sped by and resolve to think of ways to be a better person in the coming. Or maybe we’ll just plop on the couch and veg’ in front of the TV.

The irony is that most of us (depending upon what manner and how much we celebrated the night before) are perhaps less motivated on January 1st than any other day of the year. New Year’s Day is a day for not moving anything more than your fingers on the remote control, nor is it a day where you want to tax your brain or stimulate your senses. Cinematically, it’s got no place for subtitles, subtext or sub-woofers.

To aid in this restorative ritual, we offer up a list of five New Year’s movies perfectly suited for recovering from the end of 2004. We promise, nothing too challenging, nothing too disturbing and most importantly, nothing too loud.

(1999)
This ensemble piece (featuring such stars as Ben Affleck, Janeane Garofalo, Kate Hudson, Dave Chappelle, Courtney Love, Paul Rudd and Christina Ricci among many more) is set in New York City on New Year’s Eve 1981 as various groups of revelers try to descend upon a party thrown by Martha Plimpton. Presciently anticipating the current 80s revival, this film (the sole directing credit for Risa Bramon Garcia) is light on plot and more than a bit meandering. It’s kinda like “Slacker” with an all-star cast... but its boozy energy and fun cameos (hey, there’s Elvis Costello!) make for a nice brainless diversion. 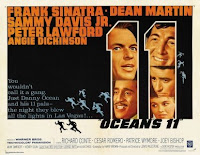 (1960)
There’s enough holiday revelry in this quintessential Rat Pack opus to make your hangover seem pale in comparison (watch for Shirley MacLaine’s cameo as an amorous young lass whom the bartender should’ve cut off in 1959). Frank Sinatra plays Danny Ocean, an orange-cardiganned bounder who reunites his old army buddies (including Dean Martin, Sammy Davis Jr. and Peter Lawford) to help in a plan to rob five Las Vegas casinos simultaneously at the stroke of midnight on New Year’s Eve. The movie’s a boozy, swaggering machismo-fest, with the Pack lazily sipping cocktails, smooching ladies, smoking cigarettes, playing pool and practical jokes as they ponder how they’ll spend their ill-gotten gains (women, you don’t want to know Deano’s plans). The movie’s main drawback is a rather somber turn of events and a real downer of a twist ending, strangely out of character for this otherwise swingin’ heist flick.

(1972)
What better way to celebrate New Year’s Eve than on a giant cruise liner, grooving to some lite pop and popping some champagne? Until a giant tidal wave capsizes the ship, leaving it bobbing in the ocean upside down. A diverse group of survivors including a loudmouth cop, a hooker with a heart of gold, a smart aleck kid, a beautiful singer and Shelley Winters are led by a tough preacher (Gene Hackman) as they fight to get to the bottom (now top) of the ship to survive. The quintessential 70s disaster flick (an updated TV movie

is coming in May) will make you count your blessings. Even if you had a crappy year, at least you’re not entering 2006 drowning in an upside down ocean liner. Cheers.

(2001)
Renée Zellweger stars as the plucky heroine of this adaptation of the popular book by Helen Fielding. Slightly overweight, somewhat klutzy and socially inept, unlucky in love, unhappy in her career, Bridget makes a New Year’s Resolution to fix all of that and chronicles the attempt in the titular tome. But Bridget gets off on the wrong foot immediately by ignoring the tried and true rule about not dipping your pen in the company inkwell... or choose another metaphor for the perils of falling in love with a co-worker... especially your cad of a boss! Watching Bridget’s trials and tribulations can be cathartically cleansing, but you have to wonder why the now ex-Mrs. Chesney didn’t heed the lessons of her onscreen alter ego. 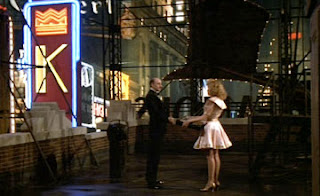 (1987)
Often dismissed as a trifle, this is Woody Allen’s most nostalgic movie, a loving collection of anecdotes (apocryphal and not) about growing up during World War II. Allen narrates the stories as the adult version of Joe (Seth Green), a boy living in Rockaway NY with his parents, grandparents, aunts, uncle and older cousin. Stories of Joe’s adventures (including watching for Nazi U-Boats and accidentally seeing his teacher dance naked) are interspersed with tales about fictitious radio stars of the time. Meticulous production design and a terrific big band soundtrack

(the impetus for the movie) capture the era perfectly. Younger viewers can find themselves feeling nostalgic for a time decades before they were born. (“Curb Your Enthusiasm” fans need to keep their ears peeled for a cameo by Larry David as the communist neighbor who loudly refuses to recognize the Sabbath.)

What makes “Radio Days” a great New Year’s movie (and the capper to our list) is the final scene: Joe and his family celebrate New Year’s 1944 while listening to a swanky party on the radio. The film cuts to the party and ends with the sophisticates clinking champagne on the roof of a Manhattan nightclub as the snow begins to fall. Allen wistfully caps the film by saying (with Kurt Weill’s ode to aging, “September Song” in the background) that as strong as his memories of his youth are, with each passing year, “those voices do seem to grow dimmer... and dimmer.”