The uneven acting legacy of the Man in Black

In “Walk the Line

,” Joaquin Phoenix has the unenviable job of recreating one of the most distinctive personae in the history of pop culture. There are very few figures more iconic and instantly recognizable than Johnny Cash

The real Johnny Cash appeared as himself in dozens of movies and TV shows, and his music has appeared in every kind of film from western to comedy to crime drama and horror (the use of “The Man Comes Around

” was nothing short of genius).

But Cash only ventured into acting a handful of times, and while it’s certainly a mixed legacy, it’s worth taking a look at.

Cash first leapt onto the screen in the 1961 cult thriller, “Five Minutes to Live

,” (aka “Door to Door Maniac”) playing Johnny Cabot, a pompadoured troubadour turned killer. In the film, Johnny teams with a con man played by Vic Tayback to kidnap a bank president’s wife for a $70,000 ransom. Problem is, the bank president is leaving his harping wife for another woman and has no interest in seeing her safely returned. Cash is competent, if campy, and has some swell lines like “This suburb life ain’t for me.”

,” (1971) a cynical postmodern western (produced by an Apache tribe) in which two jaded, aging gunfighters decide to sell tickets to one last showdown (what kind of service charge is there on that?).

Yet despite a powerful presence, Cash never quite mustered the acting chops necessary to fill the big screen. He was far more suited to acting for television. In 1962, he played Johnny Laredo in a western pilot called “Night Rider” (not to be confused with Hasselhoff’s talking car opus). 1978’s “Thaddeus Rose and Eddie” is notable in that it was the first time Johnny co-starred dramatically with his wife June Carter Cash (who played his girlfriend). Probably encouraged by her on-set support, Johnny would subsequently bring June along for the dramatic ride many times.

More TV movies followed, including “The Pride of Jesse Hallam

” (1981), starring Cash as an illiterate Kentucky miner who has to learn to read when he moves to the sprawling metropolis of, uh, Cincinnati. In 1983’s “Murder in Coweta County

,” Cash is a sheriff who brings to justice an amoral killer played by... Andy Griffith!! In “The Baron and the Kid

,” (1984), he’s a pool hustler who reunites with his long lost son to try to cash in on Kenny Rogers’ success with “The Gambler

.” Sorry, that wasn’t the plot of the film, that was the genesis of the movie.

In the late 80’s, Cash returned to TV movie westerns. He strapped on the gunbelt as an aging Frank in “The Last Days of Frank and Jesse James

” (with Kris Kristofferson as his outlaw brother), “Stagecoach

But Johnny Cash the actor seemed far more relaxed and comfortable when he wasn’t carrying the dramatic weight himself, as his most enjoyable acting jobs were the handful of times he guest starred on series television.

,” Johnny plays ex-convict / country gospel singer Tommy Brown, who, while fronting a Christian act, doesn’t practice what he preaches. Tommy drinks, cheats on his harping wife Edna (Ida Lupino) and longs to play more secular arenas. So he drugs Edna and his mistress (a young backup singer) during a small craft flight, then parachutes out of the plane as it crashes, killing the women and seemingly solving his problems. As always, the disheveled LA detective (Peter Falk) isn’t fooled for a second, and goes about cracking Cash’s alibi. As Brown, Cash gets to draw on the gamut of his experiences, saint and sinner, idol and adulterer, a man truly in black. It’s a total hoot, and arguably stands as Johnny Cash’s finest moment as an actor.

In a 1976 episode of “LIttle House on the Prairie

,” Cash plays Caleb Hodgekiss, a man who assumes the guise of a reverend gathering money and supplies in Walnut Grove ostensibly to help the victims of a fire in a neighboring town. In fact, Caleb plans on keeping the booty for himself and his wife Mattie (June again), but all those hearts o’ gold teach him the error of his ways (who’da thought?). 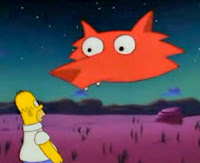 One of Cash’s final acting roles was in the form of a short but sweet voice-over. In a 1997 “The Simpsons” episode, “El Viaje Misterioso de Nuestro Homer

,” Homer has a hallucinatory experience after eating Guatemalan Insanity Peppers and is visited by a coyote spirit guide, voiced by Cash. The coyote, when not chewing on Homer’s pant leg, instructs him to seek his true soul mate, intimating that it may not be Marge. It’s a tiny part, but hearing that aged, distinctive baritone emanating from a mystical beast borne out of delirium seems somehow fitting.

Also in the late ‘90s, Cash had a recurring role as Kid Cole on “Dr. Quinn, Medicine Woman” and made an appearance on the Lorenzo Lamas biker-fugitive show, “Renegade.”