Suspension of Disbelief: It's a fine line between clever and stupid. 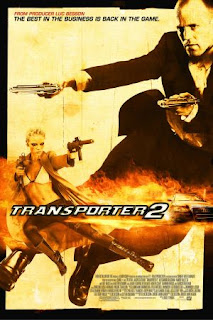 ” looking for deep character development or a complex story. They’re going for a thrill ride, a couple of hours of car chases, crashes, gunplay, fist fights, explosions and a boobie or two. Most movies rely on some suspension of disbelief, but action films expect us to accept a lot of ridiculous happenings, some of them overdone to the point of cliché. “Transporter 2” is a film built entirely out of movie clichés, right down to the drunk in the alley tossing his bottle when he sees something too fantastic to believe.

Alcohol consumption aside, there are times when movies ask us to accept too much. Creating verisimilitude, believability within context, is a tricky balancing act that, if toppled, can blow the internal reality of even the brightest cartoon.

Context changes from movie to movie. In a James Bond

film, we accept some pretty ludicrous concepts, even an invisible car. In 2002’s “Die Another Day,

” Q (John Cleese) bestows upon 007 (Pierce Brosnan, we shall miss you) an Aston Martin that, with the flick of a button, becomes invisible to the eye. Supposedly this “adaptive camouflage” is based on actual technology, but that’s irrelevant. We buy it because it’s Bond. Now, if “The 40 Year Old Virgin

”’s Andy were to suddenly pull a vanishing act on his bicycle, that would be a different story.

Cars do lots of things in movies that they (hopefully) don’t do in real life. If a speeding car in a movie hits something, odds are it’s going to go flying through the air and probably explode at some point (at the very least there are lots of sparks). Tires usually squeal even on dirt roads. And the slightest incline will send a vehicle soaring off the pavement, always landing with little more than a jolt to the driver (but never to the suspension), even though he’s usually not wearing a safety belt. Our playing along depends on who’s behind the wheel.

In “The Dukes of Hazzard

,” we can accept the General Lee leaping into the air because, well, that’s what the movie’s about. Ditto such automotive classics as “Smokey and the Bandit

,” and the “Cannonball Run

” opuses. But when Sandra Bullock successfully manages to make a 30 foot bus leap an unfinished expanse of LA freeway in 1994’s “Speed

,” even the greasiest motorhead in the audience sneers, “Yeah, right!” In a movie full of improbabilities, this step over the line into impossibility effectively loses most audience members. They went too far. 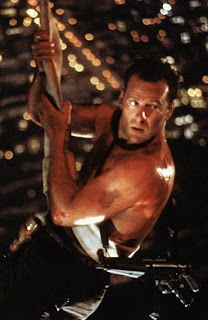 Divining that razor-thin space where fantasy and reality can co-exist is hard to do. It’s why 1988’s “Die Hard

” remains the quintessential action film; Not only does John McClane (Bruce Willis) lose his cool while battling Hans Gruber (Alan Rickman) and his band of terrorist thieves, he actually gets hurt. His vulnerability adds believability to action that is over the top, to be sure, but never too far. We wince when McClane fruitlessly pounds his bloody bare feet on the exterior windows as he hangs off the edge of the Nakatomi building by a dangling fire hose because we can maybe imagine, if we HAD TO, we MIGHT be able to do the same thing. But we never think we can jump twenty feet in the air.

Wirework in films has become a major plausibility buzzkill. Blame “The Matrix

.” While the effects technique has been mainstream in Asian martial arts films for decades, it wasn’t until the Wachowski Brothers’ 1999 sci-fi epic that Hollywood picked up on wirework and put it into overdrive. Since then, hundreds of cinematic combatants have made gravity-defying moves that the most accomplished gymnast couldn’t master in a lifetime. Supposedly normal human beings leap ten, twenty feet in the air, twirling and twisting while swinging fists or wielding weapons. Again, whether it works or not depends on the context. In the science fiction paradigm of “The Matrix” or the mystical setting of “Crouching Tiger, Hidden Dragon

,” such superhuman acrobatics are acceptable. However, while “Daredevil

” (2003) uses pseudo-science to explain the blind superhero’s elevated other senses, there’s no reason that he should be able to leap across a fifty foot expanse of buildings. For a movie that ludicrously tries so hard to ground itself in “reality,” this use of wirework (and not just for Daredevil, but for Elektra and Bullseye too) has an adverse effect.

This summer’s “War of the Worlds

” remake pushed the SoD a bit far. The aliens either miss or reject Tom Cruise, his property and his brood quite a bit in the Spielberg flick. When a plane crashes in the front yard of the house in which they’re staying, there’s miraculously a path through the debris for them to drive the unscathed car, and when they finally get to Boston, Robby’s alive and Grandma and Grandpa apparently napped through the whole invasion. Then again, Tom Cruise has been trying to make us believe some pretty wild stuff all year long. “War of the Worlds” is the most plausibility stretching sci-fi flick since 1999’s “Independence Day

,” a movie that expected us to accept humans being able to fly alien spacecraft with no training, an Apple computer being compatible with otherworld technology and a president getting into a fighter pilot outfit in order to show those evil invaders who’s boss! Oh, wait...

Of course, there are a slew of movie clichés that strain credibility in less spectacular ways: Protagonists always find a parking space right outside their destination. The ugliest guy in drag will fool everyone (“White Chicks

”). Strippers, prostitutes, homeless people and prisoners all have hearts of gold and possess wisdom beyond the most learned doctorate holder. Dogs will always survive. Children are always more perceptive than adults. And nice guys finish first.

There are some things that are just impossible to believe in any context. But maybe the hardest thing to swallow is that Hollywood continues to expect us to pony up money for shamelessly unoriginal cliché-fueled, video-game-deep, product-placement-laden, ridiculous tripe like “Transporter 2.”

POSTSCRIPT, October 2010:
So sad to see how in each successive DIE HARD sequel, John McClane became more and more of a superhero to the point where he went mano-a-fighter jet in LIVE FREE OR DIE HARD