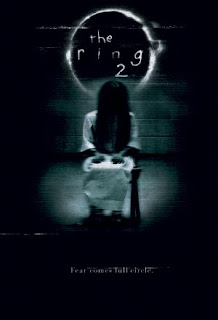 Movies traffic in clichés, many of them so improbable that it’s only been through endless repetition that we now accept them as a believable plot device rather than a ridiculous macguffin (it’s a Hitchcock term, kids, give it a Google search). The erudite millionaire will marry the beautiful but poor pretzel cart vendor; The angry, tough teenager from the wrong side of the tracks will turn out to be the noblest and wisest of the stranded plane crash survivors; And there’s nothing more frightening in a horror movie than a creepy little kid.

” is part of a long tradition of terrifying children in movies. The roster of creepy film kids is as full as Colin Ferrell’s black book. There’s the white haired, yellow-eyed tots in “Village of the Damned

,” Regan in “The Exorcist

” films, Rhoda in “The Bad Seed

,” Malachai in “Children of the Corn

!” Okay, so Curly Sue wasn’t killing anyone, but she was still nightmare-inducing!

But when you stop to think about it, the idea of being paralyzed with fear of someone clad in OshKosh B’Gosh is really kinda ludicrous. I don’t care how evil Macaulay Culkin is in 1993’s “The Good Son

,” he’s twelve! Toss him over your knee, take away his Game Boy and tell him to stop killing people! If that doesn’t work, threaten him with a contractual obligation to make another “Home Alone

” film! Besides, it’s impossible to imagine the average ADD-addled kid having enough patience to not only plan, but carry out complicated schemes to maim and destroy.

At least Macaulay was old enough to dress himself in “The Good Son.” I don’t care if Gage Creed (Miko Hughes) was a zombie at the end of the 1993 Stephen King adaptation, “Pet Sematary

,” he was three years old!!! Seeing a literal toddler literally toddling through the house with a scalpel and intent to kill is just... funny. A squeaky baby voice warning, “Now I wanna play with YEEEWWWWW” just wouldn’t raise the neckhairs in real life. It would be adorable.

Of course, once the devil comes into play, it switches things up a bit. Were it fact and not fiction, nobody would ever accuse Regan MacNeil of being cute once she’s possessed by the demon Pazuzu in “The Exorcist” (1973). But that’s an extreme case. Odds are that most real life parents would use little Damien Thorne’s 666 tattoo on his scalp as an excuse to pull out the camera rather than the sacrificial knives.

No doubt filmic evil children resonate so much because it’s so against the nature of our culture, where kids are sainted and cutesified to the point of nausea (especially if you don’t have any of your own). News commentators routinely pontificate that every tragedy is “especially hard on the children” even if Dick and Jane can’t relate to the adult bad news at all. Cherubic faces are used to sell products as much as sex is. And woe be the person who has no interest in seeing someone’s new baby photos. It’s almost criminal in this country to express anything other than unadulterated love for tykes. 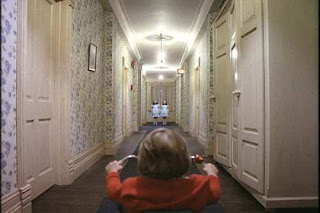 Imagine if someone were to walk up to a new parent and point at the pudgy, smelly red infant bunched up in its stroller and say, “Is that your baby? Man, he looks like a JERK!” You just can’t get away with that kind of snap judgment on someone who still poops their pants.

So the notion of tainted purity carries a frightening added weight. We’ve all been scared by the mysterious lone adult following us down that deserted dark street at one time or another. But none of us have ever quickened our pace to get away from the baby in the stroller. Well, not out of fear. But in the movies? A Bugaboo can be as menacing as a black sedan with tinted windows.

Hey, I admit it, I’m not immune. For my money, the scariest single scene in motion picture history involves not one, but three creepy kids. In 1980’s “The Shining

,” when Danny (Danny Lloyd) rounds one of the Overlook Hotel’s many corners in his Big Wheel and comes face to face with the dead twin girls imploring him in unison to “come and play with us... forever... and ever... and ever!,” I still get goose bumps.