The eminently mockable genre of the Romantic Comedy

” promises to send up romantic comedies the way “Scary Movie

” lampooned horror films. But if “Date Movie” is going to tackle all of the clichés in which that genre traffics, it’s going to have to be either eight hours long or the first in a very long series. Because there’s no genre more predictable than the Big Romantic Comedy (capitalized for effect and hereafter referred to as the BRC). Don’t believe us? Here’s a list of ten clichés you’re bound to find in any given film about Boy Meets Girl.

,” the leads can be overweight, bald, perhaps sporting a blemish or two... but in the BRC, they need to be movie-star attractive. Which always makes it difficult to buy that Julia Roberts can’t get a date. C’mon. It’s an unfair truism that the world is an oyster to the rich and the beautiful. And while (like money), beauty doesn’t guarantee happiness, it certainly raises the odds.
• See “While You Were Sleeping

2) The makeover
So, say your BRC stars such a beauty as Rachel Leigh Cook. In order to make her single status a bit more believable, she will be unaware of her actual pulchritude, buried under glasses, a frumpy outfit and hair pulled back. Luckily, our hero saw Rachel’s inner beauty before her requisite makeover, when we all see what a knockout was hiding behind those four eyes!
• See “Funny Face

3) They’ll be there for you
Sometimes that makeover will be given by the protagonist’s requisite best friend or friends, a usually less-attractive ensemble that will contain one of the following stereotypes:
• The overweight, funny, sex-crazed coworker
• The bitter, financially successful sister / ex-college roommate
• The fabulous male gay friend
Aside from exposition (“Girl, you haven’t had any good lovin’ since Ronald Reagan was in office!”), the gal-pals serve to affirm the depth of character of our heroine (“Sweetie, someday you’ll find the love you deserve!”).

For the male lead, his pack of chums will inevitably include:
• The longtime best friend, who knows him better than he knows himself
• The slacker dude
• The sleazy womanizer
The guys will usually end up on a basketball court or in a bar where they can banter about how mystifying women are. One frustrating thing about this cliché is that in order to be either politically correct or give more “conflict,” the circles of friends will be rather unbelievable. Most people tend to hang out with those of similar sensibilities. It’s rare that the punk rock sound engineer is best buds with the jock accountant. Except in movies.
• See every single BRC ever made.
Oh, as a sub-cliché, often the movie will end with the schlubby pal abruptly finding true love at the wedding (or some other formal event) of the protagonists.
• See “Shallow Hal

4) Nice place.... lots of space!
Of all the unbelievable elements in a BRC, one of the hardest to swallow is the inevitable amazing crib of at least one of the protagonists. Especially considering so many of these films take place in a major city, you’d think we’d see more 200-square foot studio apartments featuring bathrooms without doors. But then again, this aggravating cliché is present in all film genres, so let’s move on.
• See “Monster in Law 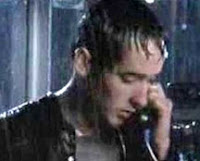 5) Weather report: 97% chance of rain
It’s a given: Our couple will have a fight, and the male BRC lead will find himself walking the streets alone, lost in his desolation, soaked to the bone in a torrential downpour, often to the melancholy strains of Radiohead, Aimee Mann or the Smiths. And those guys who sell the cheap umbrellas on every corner will have miraculously taken the night off.
• See “Pretty in Pink

6) Money doesn’t matter!
Princes will marry chambermaids, The high powered lady lawyer will choose the starving artist, the world famous movie star will fall in love with the cashier at Barnes & Noble and the millionaire stock broker will take the hooker with the heart of gold away from all this. ‘Nuff said.
• See “Notting Hill

7) It’s a thin line between love and hate
Many BRCs center around one or both character’s intense initial dislike of the other. Throughout the bulk of the film, they’ll squabble and annoy each other (while everyone around them can see how they REALLY feel) and then at the end of the movie (perhaps following the biggest knock-down drag-out yet), they’ll stop and suddenly lock lips and then burst into laughter as they realize it’s not HATE, it’s LOVE they’re feeling!
• See “As Good as It Gets

8) Oh, the fickle nature of women!
Our hero is a nice guy, solid dependable, scruffy salt of the earth type. And yet she prefers the obvious lout, the boor in the business suit who treats her like an inferior. Eventually, she’ll come around, of course. But wouldn’t you question the intentions of someone who could fall in love with two such opposite personality types? Sounds to us like this woman just doesn’t know what she wants. Stay away, John Cusack, stay away!
• See “the Philadelphia Story

9) It seems to me I’ve heard that song before
As of this writing, there have been officially 47,836,106 songs recorded about love, love lost, unrequited love, love on the rocks, et al. So why do movies keep going back to the same old standards? Regardless of their relative merits, we never again need to hear “It Had to Be You

,” “The Way You Look Tonight

” or (yeesh) “Walking on Sunshine

10) Paging Dr. Phil!
Lesson One in any and every “Relationships for Dummies” manual is this: Communication is key. And yet in so many BRCs, our lovelorn leads screw up a good thing by not confessing their love, keeping secrets, holding back concerns or fearing rejection if it were ever found out that she was once an exotic dancer or he wet the bed until he was 23! If only these people would be honest with each other, most of these movies would only last about ten minutes, tops. Ah, to dream.
• See “Fools Rush In