Attack of the Bloodthirsty Cave Creatures? No, just... THE CAVE.

Coming soon to a theater near you: A rescue team is sent into a huge underground cave to search for a missing group of spelunkers and soon find themselves stalked by huge, bloodthirsty, winged monsters.

In another time, the film may have been titled something like “The Secret of the Cave Monsters” or “The Beasts Below” instead of simply... “The Cave

Coming up with a film title is no longer the lone choice of the writer. As with every other aspect of filmmaking in the aughts, a movie’s name has to be test marketed. It should be short, catchy and easy to pronounce, but most importantly, it’s got to be vague enough to not offend any potential filmgoers. Mentioning “Monsters” might alienate someone who likes horror films, but hates creature features. If “The Creature from the Black Lagoon

” were made today, odds are Universal would’ve stuck with its intended title, “The Black Lagoon,” or more likely shortened it even more to just, “The Lagoon.”

The golden age of poetic film titles was the 1950s, an era that saw “The Day the Earth Stood Still

,” “Invasion of the Body Snatchers

,” “The Night of the Hunter

,” “From Here to Eternity

,” and “What Ever Happened to Baby Jane?

” and “The Dirty Dozen

.” Every zombie movie since has struggled to come up with a title to top the quintessential “Night of the Living Dead

Of course, the reason some of those old movies were so cleverly christened is that they were adaptations of books, a medium that’s less insulting to the intelligence of its patrons.

Ironically, some of the greatest titles christen some of the worst movies (although that’s subjective). Exploitation flicks

and B-movies of the ‘50s and ‘60s had intentionally lurid and ridiculous names, the better to distance themselves from mainstream cinema: “Six Pack Annie” (“She’s the pop top princess with the recyclable can”), “Danger: Diabolik!

,” “I Was a Teenage Frankenstein,” “Blast-Off Girls

,” ”Dr. Goldfoot and the Bikini Machine

,” and “The Rats Are Coming! The Werewolves Are Here!

” are all names cool enough to grace the hippest hipster’s album cover. 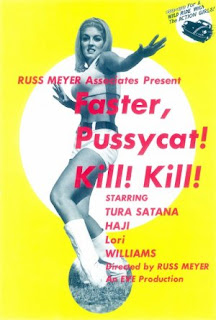 But mainstream Hollywood often caters to the less than literate. The 1989 James Bond film, “License to Kill

” was originally called “Licence Revoked.” The studio not only changed the first word from the British to the American spelling, but they felt that Americans wouldn’t know what the word “revoked” meant. 007’s been saddled with some pretty lousy titles, both taken from the novels of Ian Fleming (“You Only Live Twice

”) and attempting to sound like them (“Tomorrow Never Dies

” and its sequels successfully conjured a classic adventure serial feel. 2001’s “The Lost Skeleton of Cadavra

” attempted to recreate the experience of the cheapo ‘50s sci-fi / horror movie. The makers of last year’s “Sky Captain and the World of Tomorrow

” no doubt had to battle against the protests of the studio, who tried to balance the retro name with the internet-era tagline, “The download has begun,” which makes absolutely no sense whatsoever.

Without question, the dullest titles are affixed to sequels and franchises. Usually, a number is simply placed behind the title of the first film (with decimal notation replacing the more traditional and majestic Roman numerals, a further insult to the audience presumed to not understand the antiquated system). Sometimes there’s a colon and a subtitle, but that can just get clunky (“Star Wars: Episode III - Revenge of the Sith

” have been called, “Spider-Man No More!” or “Spider-Man: The Clutches of Dr. Octopus” or “Eight Arms to Kill You?”

The main reason is merchandising. When a part of a franchise is released on home video, it has to nestle alphabetically amongst the other films in the series, in order to encourage impulse buying of more than one DVD. Why just pick up “Die Hard

” when you can also get “Die Hard 2: Die Harder

” (which takes a bad name and makes it badder)? But this need for cohesive titling makes for some weak tags. Doesn’t “The Return of Superman” sound much more dramatic than the somewhat drab (and familiar) “Superman Returns

?” Again, were it made today, “The Bride of Frankenstein

” indicates that we may be heading to an time where movies will be named as if they’re text messages. Maybe by the time it hits theaters, “V for Vendetta

All of this is not to say that there haven’t been some great movie handles in recent years. Not surprisingly, they’ve been attached to some of the best films. “Eternal Sunshine of the Spotless Mind

” is a lyrical title that forces you to ponder its meaning. Screenwriter Charlie Kaufman didn’t make it up, it’s a line from the Alexander Pope poem that Kirsten Dunst quotes in the film, but great titles (as with great band names) are often found, not created. Wes Anderson’s “The Royal Tenenbaums

” and “The Life Aquatic With Steve Zissou

” are both evocative titles that make you want to know more. The Coen Brothers come up with some pretty good ones. “The Hudsucker Proxy

” assumes the viewer knows what a proxy is while having no idea what a Hudsucker is, hence the allure. “The Big Lebowski

But most of the time, we get “The Cave.” And coming soon! “Flightplan

”.... titles so generic that they could be about anything.

So, is lame labeling a trend that, like product placement, increased pre-show advertising, unbelievable wire work and Vin Diesel, going to continue to make the moviegoing experience less enthralling than it once was? Or is the era of bland, one-word film titles just a passing one? There could be hope. Samuel L. Jackson recently told the Defamer that his upcoming “Pacific Air 121” is reverting to its original title: “Snakes on a Plane