A netful of motion picture mermaids

,” Sarah Paxton plays a mermaid who befriends two teenage girls and falls in love with an adorable lifeguard. Whether Aquamarine gives up her tail for the hunk remains to be seen, as movie mermaids have been known to be a difficult breed.

“Mr. Peabody and the Mermaid” (1948) is about a middle aged man named Arthur (William Powell) who has lost his lust for life. But when he and his wife take a trip to the Caribbean, Peabody catches a mermaid while fishing. Peabody brings her home to Boston and while trying to hide her existence from the world, naturally falls in love with her. Life gets complicated, and it’s into the Wayback Machine... oh, wait, wrong Mr. Peabody.

That same year saw the British comedy, “Miranda,” in which a comely fishgal (Glynis Johns) kidnaps vacationing doctor Paul Martin (Griffith Jones) because there’s a shortage of men beneath the sea! Martin convinces Miranda to release him, but she makes him take her home to London with him so she can see the big city and interact with humans. Hiding Miranda’s tail under a blanket, Paul tells his wife that she’s a “patient.” Soon, the lovely Miranda has put Paul, his butler and an engaged artist pal under her spell and jealous sparks fly. All ends happily, but when we see Miranda with a half-fish baby in her arms before the credits, we realize some key scenes must’ve been cut! Which begs the question, how does a mermaid... okay, forget it.

The film was successful enough to spawn a sequel, 1954’s “Mad About Men” in which Miranda swaps places with a human school teacher. 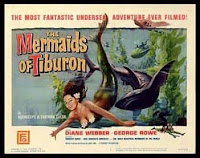 ” (1962) casts pin-up legend Diane Webber as the unnamed Mermaid Queen, leader of a group of fishtailed beauties who aids Dr. Sam Jamison (George Rowe) in a search for sunken treasure. The movie was slightly re-edited (adding some boobies) and re-released in 1965 as “The Aqua Sex.” Webber would re-don the tail in an episode of the 60s tv show, “Voyage to the Bottom of the Sea

” so the notoriously cheap producer Irwin Allen could re-use footage from “Tiburon.”

,” a young Dennis Hopper plays Johnny Drake, a sailor on leave in a small resort town who falls in love with carnival mermaid Mora (Linda Lawson). But the tail may not be fake and Mora may be one of the legendary sirens leading Drake to his doom!

Much lighter in tone is “Beach Blanket Bingo

” (1965), starring Frankie Avalon and Annette Funicello (the proto-Duff, having graduated from The Mickey Mouse Club to feature films and records). In “Bingo,” doofus surfer Bonehead (Jody McCrea), after wiping out in a surfing accident, is saved by a beautiful mermaid named Lorelei (Marta Kristen from “Lost in Space”). Lorelei (sporting Webber’s tail from “Tiburon”) sprouts legs and discovers the burgers-and-rock thrills of mid-60s California, but sadly, she’s gotta be back in the sea before midnight, when her legs revert to fishtail. That old excuse. 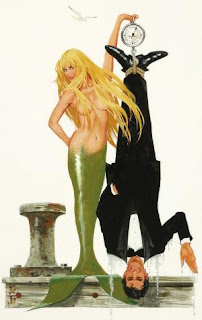 ” is a moving little film that features smart dialogue, colorful characters and a sense of place that’s slightly off-reality. Mac (Peter Riegert) is an American oil company rep sent to buy a small seaside village in Scotland, slated to be the site of a new refinery. While most of the residents are happy to cash in and move on, there are a few holdouts: Ben, a scavenger who lives in a shack on the beach, and Marina (Jenny Seagrove), a marine biologist with webbed toes. It’s not long before the magical spell of the small town gets under the corporate suits of Mac and his Scottish co-worker Danny. Given the theme of this Rewind, we’ve already spoiled the surprise that Marina turns out to be a mermaid, but the way in which it’s revealed is another subtle, charming treat in this truly lovely film that should be next in your Netflix queue.

Lacking in subtlety, but chock full of charm, “Splash

” (1984) stars Tom Hanks as newly single fruit magnate / hydrophobe Allen Bauer (Tom Hanks) who falls head over heels for a mysterious “foreign” woman eventually named Madison (Daryl Hannah). When Allen discovers Madison is a mermaid, it complicates things until his brother (the late, great John Candy) gives him a head-smackin’ reminder of how rare true love is. Now they just have to rescue Madison from the evil scientists who’ve captured her and return her to the sea... but will Allen lose Madison yet again? Oh, you know what happens. The most shocking thing about “Splash” (the movie that made a film star of Hanks) is that there was never a sequel!

But maybe the movies’ most popular mermaid of them all is Ariel, from the 1989 animated Disney version of Hans Christian Andersen’s fairy tale, “The Little Mermaid

.” In the film, Ariel (voiced by Jodi Benson) longs to know what life is like on land, despite the protests of her father, King Triton. So she makes a deal with Ursula, the Sea Witch (Pat Carroll): In exchange for her beautiful voice, Ariel will get legs for three days. Naturally, being a Disney product, there’s a handsome prince, some wacky animal sidekicks, a fistful of cheesy songs and a gloriously happy ending. Especially for Disney, since this movie grossed over $80 million and ushered in a new era of animation domination for the studio. But what we like most about “The Little Mermaid” is Buddy Hackett as the voice of Scuttle the Seagull (we love Buddy). 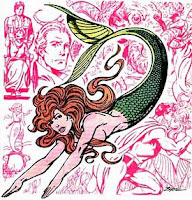 ” starts out as a harmless mermaid in the 2001 HBO reinterpretation

of the classic 1956 flick; A comely mermaid meets an unhappy demise in “Shrek 2

” stories in Tim Burton’s 2004 film; a pretty ugly mermaid pops up in last year’s “Harry Potter and the Goblet of Fire

;” and rumor has it that Laura Prepon will appear as Clark Kent’s old college girlfriend, the mermaid Lori Lemaris

in the sequel to “Superman Returns