Great movies often deal with topics that touch the heart, challenge the mind, inspire the spirit. They tell of courageous souls that lift humanity to new levels, underdogs who beat the odds, geniuses who change the world.

And then there are movies about getting laid for the first time. In the latest installment of this proud genre, Steve Carell plays Andy Stitzer, “The 40 Year Old Virgin

.” It’s (obviously) a comedy, albeit one laced with a bit of sadness. Virginity movies CAN be love stories, but they’re usually not. Perhaps because, in all honesty, it’s rare that love and this red-letter moment in a person’s life go hand in hand. 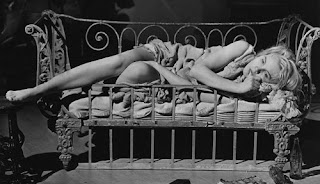 In early cinema, while sex was certainly evident at least as subtext, the topic of relinquishing virginity was taboo. Witness the furor that erupted over the 1956 film, "Baby Doll

." Adapted from Tennessee Williams, this Elia Kazan movie tells the tale of a teenage bride (Carroll Baker) who's holding onto her virtue until she turns 20, much to the agonized frustration of her much older husband. Karl Malden plays hubby Archie Lee, a struggling cotton plantation owner who is further emasculated by competition with a charming new man in town (Eli Wallach) for both business and the physical affections of Baby Doll.

The movie was denounced by the Catholic Legion of Decency (of which we think Aquaman is a member), trounced by many critics (Time Magazine called it the "dirtiest American-made" movie ever released), distribution was severely limited (77% of theaters canceled their showings) and even today, the movie isn't in print on DVD.

" into a movie in 1962. While the story of a middle aged man's consuming sexual obsession with his teenage stepdaughter was far more prurient than "Baby Doll," audiences were becoming a bit more inured to controversial content. But the story remains taboo to the extent that even as recently as 1994, a remake by director Adrian Lyne had difficulty finding a distributor.

" presented a misty, water-colored tale of a teenage boy's escort into manhood via a sad war widow, played with alluring sensitivity by Jennifer O'Neill. Perhaps because of the first person narrative of the movie, O'Neill seems far older than her 22 years as she becomes close to the young Hermie (no, not the misfit elf, but a real boy played by Gary Grimes). But there was no uproar over a boy being deflowered by a woman; it's the old double standard.

,” two 15 year old girls compete at summer camp to see who can lose her virginity first. Audiences were a bit startled by the casting of two beloved child stars, Kristy McNichol and Tatum O’Neal as the girls. Despite the prurient premise, the movie is revered by many girls who came of age in that era for its realistic, multi-layered portrayal of the often difficult decision to have sex for the first time. Equally amazing is that there wasn’t a machete-wielding serial killer lurking around the camp to dispatch the libidinous teens!

," another teen film that utlized the template of the diverse gang of guy pals trying to score. What separates this film from the pack is that in the end, our hero fails to "become a man," as it were.

,” a period piece set in the mid-60s about a group of teenage California guys who travel to Mexico to... well, look at the title. Along the way, they pick up a runaway bride (“Cheers

," a tale of moral decadence among the French ruling class. A cad named Vicomte Sebastien de Valmont gets his kicks by seducing young and/or chaste girls by any means necessary, sometimes with the aid of his ex-lover, the equally repulsive Marquise Isabelle de Merteuil. Inevitably, things get messy. The story has been adapted to film and TV many times, first by Roger Vadim in the 1959 film, “Les Liasons dangereuses

," which set the film in contemporary France and made Valmont and Merteuil a married couple trying to bed people at a ski resort. In 1988, Stephen Frears directed a more literal translation, "Dangerous Liasons

" starring John Malkovich and Glenn Close as the scheming pair and Michelle Pfeiffer and Uma Thurman as two of their victims. The very next year, Milos Forman's "Valmont

" told the same story, with Colin Firth and Annette Bening. Debates rage as to which is the best film, with a few non-traditionalists voting for 1999's "Cruel Intentions

" setting the story in current day New York, with a hot young cast including Ryan Phillippe (Valmont), Sarah Michelle Gellar (playing Mertuil as Valmont's step-sister), Reese Witherspoon and Selma Blair. With a version for every sensibility, this brutal cautionary tale should be required viewing for anyone who thinks that playing games with someone's heart (especially when sex becomes part of the equation) is a fun thing to do.

Despite many claims of our culture being more debased than ever, one could make the argument that in fact, there's more of a morality to pop culture than ever before. Take "American Pie

" (1999), the most recent progeny of "Porky's." Yes, it's about a bunch of guys who are driven to lose their virginity before prom, but in the end, they all learn about the consequences in addition to the joys of sex. Despite being more forward with the jokes (can anyone ever hear the phrase "band camp" without getting specific imagery regarding Alyson Hannigan and a flute?), the film really does have a moral center. It's not the kind of unrealistic morality that many who bury their heads in the sand would prefer; but it's a realistic depiction of a very human drive, one that is never, ever going to go away.

The fact is, in almost everyone's life, the presence of his or her virginity becomes an issue, and it's usually fraught with some degree of anxiety. To keep or not to keep? Movies like "Stealing Beauty

" (about the 16th century reign of Elizabeth I, the so-called "Virgin Queen" of England) powerfully depict this angst and show how often a woman's identity is linked to her sexuality, for better or for worse.

For guys, of course, there's usually no anxiety regarding virginity: It's almost always "not to keep." The angst only comes if that goal isn't met. it's hard to imagine a comedy mocking a middle aged woman for not having had sex yet, but such is the world in which we live. And if "The 40 Year Old Virgin" ends with Andy's virtue still intact, well, at least he has his action figure collection.