Movies that make amusement parks not so amusing

,” yet another group of teenagers cheats death, this time by skipping a doomed ride on a defective roller coaster. Part of the thrill of amusement park rides is the idea, improbable and repressed as it may be, that we could possibly die if the tilt-a-whirl goes berserk. And yet for some reason, Hollywood has rarely tapped into that particular extension of our primal fears. 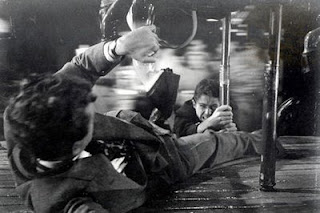 Alfred Hitchcock was the master of making us mistrust the mundane, and in 1951’s “Strangers on a Train

,” he pushed a buncha buttons. Robert Walker plays Bruno Anthony, a ne’er do well who accidentally bumps into tennis pro Guy Haines (Farley Granger) on a train (hence the title). Seems Bruno’s been following Guy’s marital woes in the tabloids and has a proposal: If Guy will kill Bruno’s evil, emasculating father, he’ll return the favor by offing Guy’s cheating wife (who refuses to give him a divorce). Guy turns down the offer, but Bruno won’t take no for an answer, and soon Guy is a widower free to get on with his life… once he kills Pops Anthony, of course. The film touches on issues of infidelity, sexuality, money, the Oedipus complex, fame and the perils of public transportation. But its most visceral jolt is a climactic fight on a carousel. When the police somewhat recklessly shoot into the amusement park crowd (!!) they miss their target and hit the poor carny running the merry-go-round, who collapses against the control lever, sending the ride spinning wildly out of control. As Bruno and Guy fight below the stampeding hooves of wooden horses, innocent kiddies hold onto the poles for their lives, horrified parents helplessly watching. Anyone who calls the merry-go-round a wimpy ride has never seen “Strangers on a Train.”

” is about a futuristic theme park gone horribly wrong. Wealthy thrillseekers pay big bucks to visit Delos, the ultimate interactive amusement park. In one of three different historical worlds, patrons interact with lifelike robots… and we mean INTERACT. They can even go so far as sleeping with them… or killing them. Of course, as with all films about technology, things go awry and the robots soon start fighting back. A “sex model” robot wench in Medieval Land refuses the advances of a guest and “Robot Gunslinger” (a perfectly cast Yul Brynner) starts taking his gunfights very seriously. The movie is snail-paced by today’s quick-cut standards, but it’s still effective enough to make you slightly wary of animatronic Abe Lincoln at Disney World’s Hall of Presidents.

In 1977, people who couldn’t get in to see “Star Wars” might’ve settled for “Rollercoaster

George Segal plays Harry Caulder, a government agent tracking down a terrorist (Timothy Bottoms) who’s been planting bombs on rollercoasters and blackmailing amusement parks. The movie is a substandard Hitchcockian cat and mouse tale with few thrills. In fact, the biggest jolt the audience got was from the film’s gimmick of “Sensurround,” a pumped-up low-end audio enhancement that intended to simulate the experience of being on a rollercoaster by creating a rumbling sensation in the moviegoer’s belly (perhaps so they’d mistake it for hunger and hit the concession stand again?). Sensurround (developed for the 1974 film, “Earthquake”) didn’t catch on because, well, it was kind of annoying, and worse, it was so powerful that it also enhanced the experience of the audiences in neighboring theaters! Imagine watching “Annie Hall

” and feeling your insides vibrate while Woody Allen gets busy! True, there is a small rollercoaster scene in “Annie Hall,” but the odds that any cinema was able to synch it to the neighboring auditorium’s Sensurround are pretty slight. 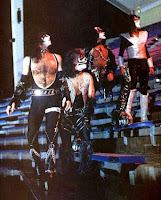 We’d be remiss if we didn’t mention the next year’s amusement park messterpiece, the Hanna-Barbera TV movie “KISS Meets the Phantom of the Park

.” Kinda like “Westworld” meets “Josie and the Pussycats,” this dramatic (sic) debut of the pop-metalists from Queens is forever ensconced in the pantheon of truly great bad movies.

Abner Devereaux (Anthony Zerbe) is the ride-and-robot creator at the Magic Mountain amusement park in California. But it seems that his slightly-animatronic gorillas and Frankenstein monsters aren’t quite thrilling enough, so Abner amps up the rides, almost killing some of the thrillseekers!

Naturally, the mad genius is fired (but allowed to retain the use of his underground lab), and his bitterness and hatred of rock and roll and the youth of America cause him to create an army of evil automatons and living zombies to wreak revenge! Luckily, KISS is booked for some shows at Magic Mountain (no doubt listed ABOVE the puppet show on the sign) and utilize their magic talisman-induced powers to save the day... and play three songs. Unfortunately, “Beth” is one of them.

So why the dearth of deadly amusement park movies? Oh, sure, John Candy gets pretty scared by the roller coaster at Wally World in “National Lampoon’s Vacation

” (1983). But tons of movies use the vertigo of riding a coaster as a metaphor for some internal turmoil the character’s experiencing.
In 1979 Playboy TV aired a quickie called “The Death of Ocean View Park” that was instantly forgotten. And the “Jurassic Park

” movies are essentially “Westworld” with dinosaurs. “Pirates of the Caribbean

” is BASED on a ride, but that doesn’t count. “Catwoman

” had a scene where people almost die on a Ferris Wheel, but we don’t need to ever bring up “Catwoman” again, do we? No. We don’t.

Maybe it’s all a big conspiracy… perhaps the Walt Disney Empire has a secret deal with all the major studios to keep from making movies about deadly theme park attractions. So, if (and we’re just saying IF) that’s the case, how did “Final Destination 3” get made? Will there be repercussions? If the producers of the movie are suddenly, mysteriously done in one by one by killers clad in giant foam cartoon costumes, don’t forget you read it here first!
____________________________________________________
ORIGINALLY POSTED in REWIND on MTV.COM, January 2006
Posted by Pops Gustav at 11:37 AM