,” grizzled New York cop Jack Mosley (Bruce Willis) has to transport small time hood Eddie Bunker (Mos Def) from police custody to a courthouse a mere sixteen blocks away. But in movie terms, that 16 blocks could actually traverse 3000 miles. New Yorkers in the audience are certain to spot at least a few leaps, either in logic or geography, but that’s to be expected.

Movies often have to take liberties with their real-life settings. Story sometimes dictates that the legendary downtown deli needs to be moved closer to the midtown concert hall. Residents of any town portrayed on film (whether it’s New York, L.A., Dublin, Dubai or Lancaster PA) will always spot factual errors, but most of the time they’re irrelevant.

For instance, in Elia Kazan’s 1954 classic, “On the Waterfront

,” a tale of corruption and redemption filmed in Hoboken NJ, Father Barry (Karl Malden) chases ex-boxer / longshoreman Terry Malloy (Marlon Brando) out of a parkside church that’s located at 4th and Willow Streets. But when the camera switches angles, the actors are suddenly in a different park located ten blocks away. Why the switch? Because the park at 10th and Hudson is on a precipice that overlooks the docks of Hoboken, the Hudson River and Manhattan, adding important visual elements to the scene.

Does the edit throw the viewer who knows Hoboken for a loop? At first, yeah. But who cares? Directors can’t worry about the nitpicking of every tiny demographic. It’s a bit harder to buy that “On the Waterfront” is supposed to take place in Brooklyn, as the views of Manhattan are from the west, not the east, but we’ll even let that slide.

Besides, fudging geographical details on location still feels more realistic than most sets, even if they meticulously and accurately recreate an actual space. Keen cineasts can usually spot exact moments when a movie switches from location to a set within the same scene. Major studios’ backlot city streets are notoriously unbelievable (as any episode of “Friends 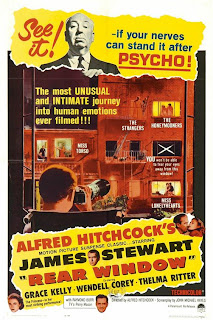 There are exceptions, of course. Ironically, one of the most realistic movie depictions of New York City was shot entirely on a studio set. Alfred Hitchcock’s 1954 classic, “Rear Window

” takes place entirely within the back courtyard of the Greenwich Village apartment of L.B. “Jeff” Jeffries (Jimmy Stewart), a photojournalist laid up with a broken leg. Restless and bored, Jeff starts spying on his neighbors through use of a telephoto camera lens and begins to suspect that the burly salesman across the way has done in with his harridan of a wife. The hodgepodge of neighbors, all living within earshot, none really knowing the other, becomes part of the unfolding drama. The characters’ interaction, or lack of same, vivdly conveys the ironic isolation of a dense population. Hitchcock famously detested location shooting, but was a stickler for creating a believable setting for his movies, and it shows.

But when your movie is about a guy who does whatever a spider can, realistic urban design can go out the window. Witness 2004’s “Spider-Man 2

,” in which a battle between Spidey (Tobey Maguire) and Dr. Octopus (Alfred Molina) takes place on an elevated train running through Manhattan. The scene got New Yorkers’ spidey senses tingling, since there hasn’t been an El line on the island since 1940 (the non-CGI location footage was shot in Chicago, where the El is very much alive).

Conversely, it can be jarring when a supposed fictional city contains actual landmarks. In “Superman: the Movie

” (1978) and its sequels, Metropolis is a city with a real identity crisis. Superman (Christopher Reeve) and Lois Lane (Margot Kidder) fly around Metropolis landmarks such as the Statue of Liberty and the World Trade Center. But in “Superman IV: The Quest for Peace

There are a handful of typical problems that pop up when movies supposed to take place in the US are filmed in another country. Jackie Chan’s Canadian-shot “Rumble in the Bronx

” (1996) features MOUNTAINS in the background! Signage indicating the metric system, or using the British spelling of words like “colour” can jar the viewer from his or her sense of place. Stanley Kubrick’s final film, 1999’s “Eyes Wide Shut

” is loaded with UK road signs (there is no Hyde Street in New York).

Chunks of California tends to pop up all over the country in movies as well. In 1999’s “American Pie

” (which takes place in Michigan) there are palm trees in the background. Washington DC’s Dulles Airport mysteriously contains large maps of Los Angeles and Pacific Bell payphones in “Die Hard 2

,” contains the longest car chase in history, as a roadside sign plainly states they’re at the Los Angeles City Limits.

Fudging with maps needs to serve a point. Residents of Washington, DC may chuckle at the (nonexistent) Georgetown subway stop in 1987’s “No Way Out

,” but they must wince during “Broadcast News

” (1987) when control-freak TV news producer Jane (Holly Hunter) insists on telling cab drivers what routes to take. The problem isn’t her overbearing nature, it’s that she has no idea what she’s talking about. Her directions are all wrong, including telling one cabbie she’s going to a bar at 17th and Vermont... an intersection that doesn’t exist. The subway station in “No Way Out” is a plot device borne out of necessity. The poor geography in “Broadcast News” is just lazy writing.

The bottom line is, what’s most important is that the FEELING of the location is captured. If it’s New York, the filmmakers need to recreate the energy and claustrophobia, the excitement and clutter, the glitz and the garbage, not the precise location of the Astor Place subway station (moved about thirty blocks to Hell’s Kitchen in 1996’s “Sleepers

Besides, nitpicking details don’t mitigate the fun of seeing a location you know onscreen. I had a great, surreal New York experience during a showing of “Unfaithful

” in 2002. While slightly startled by the film’s displacement of the Strand Bookstore from 12th Street to SoHo, I was positively stunned to see Connie (Diane Lane) and her lover Paul (Olivier Martinez) coming out of the very theater in which I WAS WATCHING THE MOVIE! The entire audience gasped and burst into laughter.