” isn’t a superhero film positing Gandhi as the Flash

, but rather about a refurbished Indian motorcycle that New Zealander Burt Munro (Anthony Hopkins) rides into the land-speed record books. Few vehicles have inspired movies more than the motorcycle; with its inherent image of danger, cool and rebellion, it is the perfect metaphor for bad boys, lone wolves and rebels. Herewith, our top ten Motorcycle Movies!

(1968)
Schlockmeister Herschell Gordon Lewis’ entrant in the Chicks-on-Bikes genre, “She-Devils on Wheels” features the exploits of an all-female motorcycle gang called “The Man-Eaters.” When they’re not using men to sate their urges, they’re dragging them behind their bikes until they’re a bloody mess (just to show who’s boss). When a male biker gang led by a guy with the very non-threatening nickname of “Joe-Boy” challenges their turf, things get head-choppingly ugly.

9) Girl on a Motorcycle

(1968)
Also known as “Naked Under Leather,” “Girl on a Motorcycle” is about a conflicted woman named Rebecca (rocker Marianne Faithfull), torn between her husband and her lover. As she tears through the French and German countryside on her Harley, her mind obsesses over the two different relationships with psychedelic intensity... and as any biker will tell you, you GOTTA pay attention when you’ve only got two wheels beneath you. 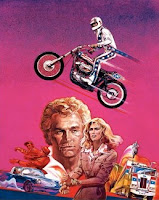 ” starring George Hamilton (!??!) as the legendary stunt cyclist, “Viva Knievel!” stars Evel himself as a moralistic adventurer on the side, battling an evil South American drug lord played by... Leslie Nielsen! No, this was NOT a parody ala “Airplane!

,” this was supposed to be an actual action drama. But oh, the melodrama! In one scene, Evel awakens an orphanage full of youngsters in order to give them action figures of himself, and inspires a lad on crutches to walk again!!

(1979)
Hardcore bikers will scoff at the inclusion of this mod opus, as the motorized vehicles herein are technically Vespa Scooters, and not motorcycles, but we thought we’d mix things up a bit. Besides, motorcycles are represented in this film (based on the Who’s 1975 concept album

), as the tough rockers’ counterparts to the more stylish mods’ mode of transportation. “Quadrophenia” remains an enthralling glimpse into the frustration of working-class Britain of the 60s as well as the power that music has to define its more rabid listeners.

(1981)
Zombie-meister George A. Romero took a vacation from the Land of the Dead to make this Hasselhoff-free curiosity, a modern “Camelot

” on Hogs. Ed Harris plays King Billy, the leader of a group of motorcycle-riding jousters who tour the County-Fair circuit knocking each other off bikes while clad in medieval armor. Naturally, when the troupe starts to hit it big, the Knights of the Round Table begin to fall apart. While a bit overlong and predictable in its hew to the legend of King Arthur, “Knightriders” contains great performances and some really incredible mace-on-bike action.

aka The Death Wheelers (1971)
So, let’s say you’re the leader of a biker gang called “The Living Dead” and you suddenly decide that the name is SO COOL, you’ve gotta make it literal. What to do? You enlist the aid of your mom and a frog-worshiping cult to help you die and come back as a Zombie Biker! Now you have to convince the rest of the gang to follow you. C’mon! All the cool kids are doing it!

” is a better film, the lower-budget, visceral quality seems to better suit the down and dirty nature of this post-apocalyptic revenge tale. When the family of policeman Max Rockatansky (Mel Gibson) is murdered by a biker gang called The Glory Riders, he becomes, well, Mad. Hyper-stylized, modified motorcycles feature into action sequences so spectacular, a helmet should be required just to watch the movie! You can practically smell the burning rubber, oil and, ugh, flesh.

(1966)
Roger Corman directed this rather nihilistic ode to the most famous biker gang of them all. Peter Fonda plays Hell’s Angel Heavenly Blues, who loses his best friend Loser (Bruce Dern) to a police shootout. When the locals won’t allow the Angels to bury Loser (that’s his name, kids), Blues sees red. In the town’s defense, this biker gang isn’t misunderstood... they are just plain bad. Raping, pillaging, you name it. Their credo: "We want to be free to do what we want to do without being hassled by the man! And we want to get loaded!" In fact, co-star Nancy Sinatra would later disown the film for its unrepentant violence. Peter Fonda, of course, would go on to make a far more respected biker film... 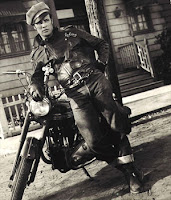 (1969)
One of the most iconic films of the 60s, “Easy Rider” is the story of Captain America (Peter Fonda) and Billy the Kid (director Dennis Hopper), two hippies who ride choppers from Los Angeles to New Orleans, discovering Jack Nicholson and America along the way. That is, the America of the late 60s, full of counter culturalism, small-mindedness, hate, drugs, hope, despair, beauty and tragedy. And the ending (which we won’t ruin if you haven’t seen it) remains one of the most shocking climaxes in film history.

(1953)
“The Wild One” slightly edges out “Easy Rider” as the quintessential bike flick because its imagery is more classic. Marlon Brando plays Johnny Strabler, the leader of biker gang The Black Rebels, who invade a sleepy small town after being thrown out of a bike rally for reinforcing bad biker stereotypes. The gang’s brand of disaffected nihilism is classic 50s juvenile delinquency, somewhat quaint by today’s standards, but shocking and undeniably sexy back then. The classic exchange from this movie: Mildred asks, “What are you rebelling against?” to which Johnny replies, “Whattya got?”

It’s amazing to think that the image of the classic motorcycle really hasn’t changed since “The Wild One.” To many, there’s nothing cooler than straddling a Hog and risking life and limb to feel the rush of (relatively) unprotected speed. And while we doubt next year’s “Ghost Rider