Who's your Willy? OR, When is a remake more than a bad idea?

It’s all semantic. Tim Burton insists that his adaptation of Roald Dahl’s “Charlie and the Chocolate Factory

” is NOT a remake of the 1971 movie. But if a book has already been turned into a movie... and then is turned into a movie AGAIN, is that not a remake? How is it possible to NOT compare the two versions? This is not the kind of apples and oranges book-to-film comparison that is inherently unfair. It’s comparing one movie to another movie telling the same story (tangerines and clementines?). And while Burton claims that he was never a fan of the original film directed by Mel Stuart, his is a minority opinion. Which begs the question, when is a remake (or whatever) more than ill-advised?

, but since Dahl himself wrote the screenplay for and was heavily involved in the making of the original film, it’s safe to assume “Willy Wonka and the Chocolate Factory” reflects his vision. Since Dahl died in 1990, his estate has been overseen by his family, and (as with Dr. Seuss post-mortem), we can only speculate as to what he’d think of what’s being done with his creations.

So we have to decide for ourselves. We saw “Charlie and the Chocolate Factory” with minds as open as possible, but hearts long given to the first “Willy Wonka.” And we have to say, closer to the book or not, “Charlie” is no golden ticket. Burton’s film is the product of our time; It’s far more concerned with how it looks than what’s on the inside. As with most of his movies, it’s another overly art-directed set piece that fails to connect on any real emotional level, despite the newly (and awkwardly) added backstory that gives Willy Wonka (Johnny Depp) parental abandonment issues. There’s no whimsy, no magic; it’s all style and no substance. 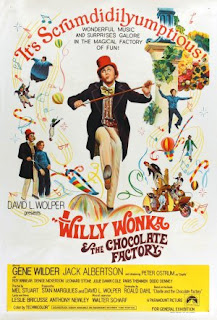 By contrast, “Willy Wonka and the Chocolate Factory

” (the chocolatier was given top billing in the film to tie-in with a General Mills candy line) is steeped in heart and soul. Like “It’s a Wonderful Life

,” Stuart’s film was NOT a critical nor commercial success in its original release, but it has likewise gained those movies’ rare, beloved iconic status. Like some of the best children’s entertainment, the movie can be difficult; It’s smart, dark, at times terrifying and presents a world that’s ironically not sugar coated.

From the addition (by Dahl himself) of the subplot of Slugworth and the formula for the Everlasting Gobstopper to the decision to make the film a musical (and what songs!); From the terrific casting to the pure imagination of the magical (but believable) chocolate room, “Willy Wonka and the Chocolate Factory” is pitch perfect.

But the weight of the most iconic films almost always rests on the shoulders of an indelible performance. Gene Wilder BECAME Willy Wonka. Throughout the film, he’s not lovable, he’s a little loopy, but he is (in contrast with Johnny Depp’s one-note-weird performance) REAL. You feel his cynicism towards the rotten kids, the devilish glee / creative pride he takes in the sometimes trippy aspects of the factory. There’s a sparkle in Wilder’s eye that hints at something deeper. And when Charlie gives back the everlasting gobstopper, the emotional payoff as he learns he’s passed the test and won the entire factory is sweeter than ANYTHING in the new film.

Any movie that’s remade brings out purists who champion the original; It’s inevitable.
Even the unreleased 1994 “Fantastic Four” cheapie probably has its champions (see last week’s Rewind). The knee-jerk reaction is to dismiss remakes as crass signs of Hollywood’s lack of imagination and daring. And it’s often the case. Studios feed on youthful ignorance of film history (“There was another ‘Cape Fear

?’”) or our often xenophobic sensibilities (“’The Ring

But certain genres such as science fiction or monster movies seem to allow for reinterpretation. Sometimes people want to see what improved effects technology can add to a story. As beloved as the original 1933 “King Kong

” is, most fans seem to be jazzed for Peter Jackson’s new version

). These genre films can be updated to fit contemporary technology and social environment while retaining the core nugget of the story (as in “War of the Worlds

But there do seem to be some films that are SO iconic, so timeless, so ingrained, helmed by such indelible lead performances that to remake them seems quixotic at best. Gus Van Sant’s 1998 shot-for-shot redo of “Psycho

” is regarded by almost everyone as nothing more than a curious exercise. Poor David Soul never stood a chance at replacing the image of Humphrey Bogart as Rick in the 1983 TV series based on “Casablanca

.” And as much as we love Steve Martin, nobody’s ever going to supplant the late, great Peter Sellers

as Inspector Clouseau in “The Pink Panther

” (perhaps the studio realized this too late, as the new movie’s been bumped to next year).

Maybe for kids who never read “Charlie and the Chocolate Factory” or saw the original film on video, Johnny Depp will become Willy Wonka. But it’s a sure bet that their parents sitting next to them in the theater won’t be able to shake the memories of Gene Wilder and a world of pure imagination. After all, nobody ever gave up the formula for the everlasting gobstopper.
_________________________________________________
ORIGINALLY POSTED in REWIND on MTV.COM, July 2005
Posted by Pops Gustav at 4:53 PM