”?), but it somehow still seems odd for the socialite-cum-überceleb to be top billed in a film. Then again, musicians, athletes, stand-up comics and other miscellaneous famous folk move from their primary milieu into acting all the time.

Sometimes it’s a smooth transition. Frank Sinatra’s natural charisma easily translated to the screen and he even won an Academy Award for his performance in “From Here to Eternity

” (1953). Tom Waits has proven as distinctive an actor as he is a musician. Dwayne “the Rock” Johnson has smoothly transitioned from performing in the ring to doing so in big budget action flicks. Even Senator Fred Thompson missed some votes on the floor to act in dozens of films, including “Die Hard 2

But sometimes non-acting celebrities find out that speaking lines and moving at the same time isn’t as easy as it looks. Herewith, some of the more awkward screen performances by non-actors through the years.

MICHAEL JORDAN in everything
In addition to Michael Jordan’s seemingly superhuman ability on the court, he is immensely likable and not a bad looking joe. So how come in every single filmed appearance, from movies to TV shows and the twenty thousand or so commercials he’s done, Jordan is as stiff and uncomfortable as a 10-year old in a suit? Jordan’s never had to play anyone other than himself, and yet he always comes off as a bland, wooden personality. Even Tweety Bird out-acts Jordan in “Space Jam 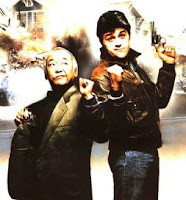 ” (1989)
The ‘80s were all about the action buddy movie, a genre that successfully paired Eddie Murphy with Nick Nolte in “48 Hrs

” and Mel Gibson with Danny Glover in “Lethal Weapon

,” just to name a few. So how could the brilliant matching of Jay Leno with Pat “Mr. Miyagi” Morita go wrong? Yeah, that’s a rhetorical question. Stand-up comic Leno (even when he was funny, a long time ago) has always seemed self-conscious, as his forced Tonight Show smiles prove. But cast as a Detroit cop against Japanese investigator Morita, having to run and wield a gun in addition to cracking wise, Leno seems as lost as a prom queen at a comic book convention.

COLLEEN HASKELL in “the Animal

” (2001)
Reality TV seems to be the ultimate realization of Andy Warhol’s “15 minutes of fame” theory. Everyday schlubs are seen each week by millions of people and some have been able to milk that fleeting fame a bit past the final elimination. But when Survivor castoff Colleen Haskell played Rianna, the animal activist love interest to Rob Schneider in “the Animal,” critics struggled to find the words. “Cute” was the most charitable word used to describe her non-performance, intimating that her part could’ve pretty much been played by a life-sized teddy bear. Actually, that may have been better.

” (1997)
You can’t blame Shaq for seeming a bit stiff in this superhero B-movie... the titular character clanks around in a full suit of homemade armor. Based on a character in the DC Comics Superman family

, Steel is an inner-city avenger who uses state of the art technology to battle corruption and crime. Ironclad heroes don’t quite translate that well to live action, but Shaq plays it so uptight-straight that it seems as if he’s got a metal bar inserted... well, you get the idea.

JUSTIN GUARINI and KELLY CLARKSON in “From Justin to Kelly

” (2003)
Exactly how much blame “American Idol” will shoulder for the pending downfall of western civilization is something for posterity to decide. But those future historians will no doubt list “From Justin to Kelly” high on the list of that show’s crimes. The cash-in beach movie features acting (and singing) that makes Frankie & Annette 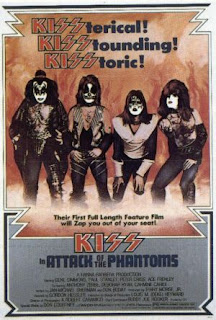 KISS in “KISS Meets the Phantom of the Park

” (1978)
Don’t get us wrong. We love KISS. And as kids, we were so psyched for this Hanna-Barbera produced TV movie that posited the rockers as superheroes... but ohhhh, that acting. Paul Stanley’s Queens accent is as thick as his platform heels. Ace Frehley giggles and squawks like a parrot on quaaludes. Peter Criss’ actual voice was replaced with looping by cartoon voice actor Norman Alden.... who played Aquaman on “Super Friends.” Only comic book fan Gene Simmons struck the proper tone, saving (heavily made-up) face, which may be why he was the only member of KISS to do more acting in the wake of this film. “KISS Meets the Phantom of the Park” is disavowed by the band, but it’s a “so-bad-it’s-good” classic (just out on DVD!).

” (1995)
Lots of models have made the successful transition to acting, Grace Kelly, Lauren Hutton and Charlize Theron, just to name a few. But despite being one of the most successful models of the 80s and 90s, Cindy Crawford just couldn’t cut it as a thespian. In her one major film role, Cindy plays an attorney who needs the protection of cop-on-the-edge Billy Baldwin (whom some would likewise dub a non-actor) when she’s targeted by the KGB! Crawford’s stiff-as-a-mole performance was irrelevant in light of the movie’s one and only draw: the removal of her shirt.

BOB DYLAN in “Masked and Anonymous

”(2003)
....Unless of course, you worship at the altar of Dylan the musician, in which case you probably loved his mumbling, disjointed performance in this tale of a falling star attempting a comeback. Co-written by Dylan with “Seinfeld” alum Larry Charles (who also directed), this is one of those vanity projects that was only tolerated due to the legendary status of its creator.... again, AS A MUSICIAN. Anyone who doesn’t own a copy of “Freewheelin’

” (1990)
Ya gotta love John Waters, champion of the freaks and outcasts... and newspaper heiresses who were kidnapped by the Symbionese Liberation Army and forced to rob banks at gunpoint. Seminal tabloid queen Hearst seemed like a deer in the headlights as the mother of bad-girl Wanda (Traci Lords) in this musical ode to 50’s juvenile delinquents. But her cardboard performance may well have been Waters’ direction, since he brought her back in three more movies, and she went on to act for other filmmakers as well!

in everything
Really like shooting fish in a barrel, isn’t it? The poor girl doesn’t even seem convincing when she plays herself, let alone actual characters in bombs like “To the Limit

” (1995). One has to wonder, did her billionaire centurian centenarian husband buy her as an actress? Or didn’t it matter? Hmmm....

All of this just goes to show that while we’ve become a culture that places the highest value on celebrity... we really don’t have that much respect for the artform of acting. How else to explain William Hung being cast opposite Nicole Richie in a remake of “A Star is Born?”....