Superhero Movies: a Primer for Hollywood 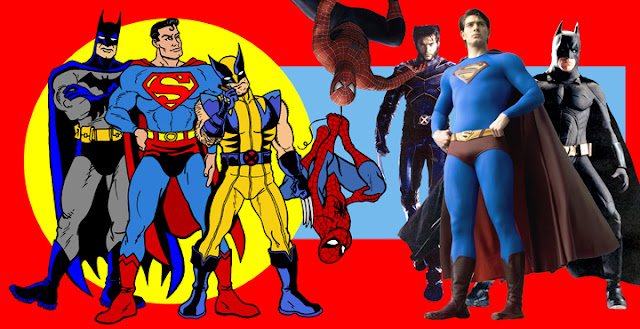 Spider-Man. Batman. Superman. The Fantastic Four. Daredevil. Hulk. Spawn. Wonder Woman. Hellboy. Ghost Rider. Iron Man. X-Men. The list goes on and on of comic book superheroes who either have made or are making the leap to the CG-fueled world of the big screen. Sometimes it’s done right (thank you Richard Donner, Sam Raimi and Bryan Singer). Sometimes it’s not (curse you, Tim Burton, Mark Steven Johnson and Joel Schumacher). Herewith, a handy reference guide for filmmakers on the right way to do a superhero movie based on a comic book. 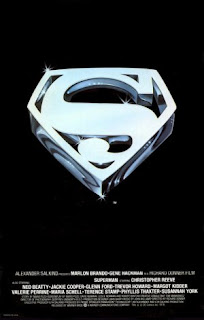 1. BE FAITHFUL, BUT NOT SLAVISH
The template for a successful superhero movie was set in 1978 by “Superman: the Movie

,” Richard Donner’s elegant take on the last son of Krypton

. What made that movie work so well was Donner’s decision to play it straight, to remain truthful to the spirit of the comics. “Verisimilitude,” believability within context was the goal. And, rather than laughing, we believed a man could fly.

”). Movies and Comics are different animals and have different artistic needs. What works on the printed page doesn’t always translate to the screen. Director Bryan Singer (an avowed accolyte of Donner’s Superman film) made the right decision in “X-Men

” (2000) when he opted to replace the characters’ traditional colored superhero costumes with matching leather jumpsuits. But because that movie (and its superior sequel, “X2

As opposed to 2004’s Razzie-Award-winning “Catwoman

,” a movie that had absolutely nothing whatsoever to do with the DC Comics anti-heroine

other than a title (even her alter ego was changed). Why bother with licensing a character if you’re going to ditch everything and start completely fresh? Name recognition alone is only going to get so many people into the theater (as this turkey proved).

” tried TOO hard to recreate that comic book. Cramming years’ worth of storylines from the Marvel comic

2. TRUST THE SOURCE
Perhaps if Johnson had only chosen one storyline from the comics, “Daredevil” would’ve fared better. Rare is the superhero movie that actually adapts a non-origin tale from the comics. Perhaps it’s out of condescension on the part of the filmmakers or the need to keep comic book writers out of the Screenwriter’s Guild. But the fact remains, DC Comics has published dozens, if not hundreds of tales pitting Batman against the Joker

that were far superior to Tim Burton’s plodding 1989 film

. Can anyone even remember exactly what the Joker’s evil plan was in “Batman?” Besides earning a big paycheck? 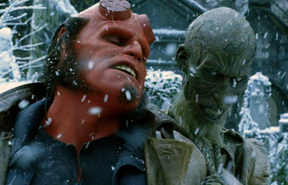 But Burton’s known for not being able to tell a story, adapted or otherwise. What’s more puzzling is why Guillermo del Toro, a huge fan of Mike Mignola’s comic book

” likewise didn’t trust the source when making his 2004 adaptation. By adding the character of John Myers, the non-mutant agent of the Bureau for Paranormal Research and Defense, del Toro was trying to give the audience their surrogate, the normal guy we could relate to (Myers also allowed for the superfluous love triangle with Hellboy and Liz). But all it did was dilute the atmosphere. The only scene in “Hellboy” that came close to capturing the gothic feel of the comic was when the corpse of Ivan is revived to guide the characters through the cemetary.1

If the characters are interesting enough to translate to the big screen, shouldn’t some of the stories follow suit? “Spider-Man 2

” used the “Spider-Man No More!

” story by Stan Lee from issue #50 of the comic book as inspiration, and that movie is considered by many to be the best superhero movie to date.

3. DON’T CLOG UP THE PLOT
The biggest problem with most comic book movies is there’s so much exposition required that it becomes difficult to squeeze in a decent story. For every costumed hero and villain, there has to be an origin before the fists start flying. Unlike a regular drama where vital stats usually give you enough background to get rolling with the plot, if the character can fly and wears a funny costume, you gotta delve into that a little bit (the X-Men movies

managed to get around this problem with one fell snikt, er, swoop: They’re all mutants. Let’s move on). But these movies are often primarily about the marketing. After “Batman” became a merchandising behemoth in 1989, the studios quickly realized that more characters = more tie-ins and since nobody’s clamoring for the Commissioner Gordon action figure, most comic book flicks since have featured more than one villain. So in 1997’s “Batman and Robin

,” three heroes (Batman, Robin and Batgirl) battle three villains (Mr. Freeze, Poison Ivy and Bane). Not that Joel Schumacher’s day-glo nightmare didn’t have more problems, but with this much exposition, there wasn’t even room to tell a story.

By contrast, Spidey fights only Doc Ock in last year’s “Spider-Man 2,” which leaves enough time to delve into the relationship between Peter Parker and Mary Jane, which is really the soul of Sam Raimi’s film. Inevitably, though, rumor has it that an extra adversary will be added to the mix of “Spider-Man 3

.” But it doesn’t have to sound the death knell for great Spidey movies.2 There is a way to satisfy the marketing execs without cluttering up the picture....

4. STEAL FROM BOND
If the studios are set on having more than one villain in a movie, there seems to be an obvious way to do so without sacrificing story: An all-action pre-credits sequence. Taking a page from the James Bond series, a superhero (let’s use Spidey as the example) flick could open with an all out action sequence utilizing a lesser villain that might not be able to carry an entire film. There’s no need for exposition, no origin required, all we see is the climactic battle between our hero and a bad guy. This could allow for the use of a visually spectacular villain (like perhaps Venom or the Molten Man) that would be tricky to do for the whole movie or perhaps one that’s not interesting enough to sustain two hours (say the Rhino, Elektro or the Scorpion).

“X-Men 3” could open with a training session in the Danger Room (a comic book staple that’s yet to make it to the movies) where our heroes fight holographic or robot versions of Juggernaut, Wendigo and the Blob (just trust us, you don’t want a full movie of these bad guys). Presto: there’s your extra action figures with no exposition required.3

6. AVOID THE TERRIBLE TINKERER
While the general moviegoing audience doesn’t care, nothing cheeses a comic book nerd more than monkeying around with the look of a beloved character. Again, and in defense of Hollywood, most costumes need to be altered to go from ink to cloth (or plastic or leather or whatever space age polymer). But costume designers, with no allegiance to fandom, usually follow a compulsive drive to over-design, leading to a Spider-Man costume Peter Parker could NEVER have made himself, a superfluous second “S” on the new Superman’s belt buckle, and (you knew we were going here) Batman and Robin’s rubber nipples.

But if the character is as iconic as Superman or Spider-Man, you can’t mess around too much. Joss Whedon has hinted that his version of Wonder Woman won’t be clad in the star spangled shorts that she’s worn for 63 years (not counting a brief period in the late ‘60s when she became a non-powered Emma Peel type character). C’mon, Joss. It’s Wonder Woman. We know it’s goofy, but we want the stars.4

Similarly, casting a superhero is tricky. In general, going with an unknown usually works best, although with big money riding on potential franchises, studios are reluctant to do so. But suspending disbelief becomes harder if the person wearing the spandex is more recognizable than the symbol on the chest. Brandon Routh stands a much better chance being accepted as the new Superman

than Ben Affleck did as Daredevil. Of course there are exceptions to the rule, as Tobey Maguire proved in his portrayal of Spider-Man (the fact that his face is completely masked helps a great deal).5

7. BE CAREFUL WITH DISTRACTING NOSTALGIC CASTING
It’s become almost requisite for actors who once wore cape and cowl to cameo in an updated version of their hero. The precedent was set in ‘78’s “Superman” when Kirk Alyn (who played the man of steel in the 1940’s serials

) had a small part as young Lois Lane’s parents. (the sequence was dropped from the theatrical release, but has been added to the director’s cut on DVD). But if it doesn’t add to the story, then isn’t seeing Lou Ferrigno (TV’s Incredible Hulk of the ‘70s

” just pointlessly distracting? Thankfully, Adam “Batman” West hasn’t been invited to portray Bruce Wayne’s father in flashback... yet. The only exception might be if Joss Whedon would cast Lynda “Wonder Woman

8. IF YOU’RE GONNA CHANGE EVERYTHING....
All of this is not to say that radical reimaginings of superheroes can’t work. Maligned as it is by diehard comics fans, the ‘60s “Batman” series remains a pop masterpiece. When Peyton Reed (“Down with Love

”) was slated to direct “Fantastic Four,” he wanted to do a tongue-in-cheek period piece set in the swingin’ sixties (when the comic debuted), an angle that sounds more promising than what we’re seeing in the previews for the serious adaptation coming in July. While most fanboys groused at the rumor that Jack Black was going to do a comedic version of “Green Lantern

The whole point is, superhero movies are supposed to be fun. Whether that fun comes in the form of psychological drama (“Batman Begins

” trilogy), what truly matters is whether they’re made with care or not. Just because a movie is dreamed up by a producer with dollar signs in his eyes doesn’t mean it can’t become pop art.

POSTSCRIPT, October 2010:
Lots of notes here (enough that I almost just rewrote the whole piece):
1. Guillermo del Toro did read this and actually said on his website that he thought it was a well-thought out piece (aw, nice). And while HELLBOY II did ditch Myers, that film still failed to capture the spirit of Mignola's comic (and don't get me started on the final shot of that film!).
2. I guess it did. Well, for that incarnation, anyway.
3. While X3

did indeed open with a scene in the Danger Room (battling the Sentinels, no less), to date no superhero movie has done the 007-esque unrelated opening. And it still boggles my mind (Oh, the Juggernaut actually wasn't so bad in THE LAST STAND, either).
4. When Warner felt that Whedon's Wonder Woman screenplay strayed too far from Paradise Island, that film was killed, as was Diana's next proposed live action incarnation in the aborted JUSTICE LEAGUE film. As of this postscript, it's recently been announced that David E. Kelley is going to produce a new WW TV show, and I'll bet money that she's not wearing the red, white and blue costume (nor perhaps even the hopefully temporary monstrosity designed by Jim Lee in the comics currently).
5. Apparently Tobey Maguire didn't like having his mug hidden, as the mask was off more than on in SPIDER-MAN 3.
6. This still needs to happen.
_______________________________________
ORIGINALLY POSTED on MTV.COM, Fall 2005
Posted by Pops Gustav at 8:04 PM